14 This, then, is what I pray, kneeling before the Father, 15 from whom every fatherhood, in heaven or on earth, takes its name. 16 In the abundance of his glory may he, through his Spirit, enable you to grow firm in power with regard to your inner self, 17 so that Christ may live in your hearts through faith, and then, planted in love and built on love, 18 with all God’s holy people you will have the strength to grasp the breadth and the length, the height and the depth; 19 so that, knowing the love of Christ, which is beyond knowledge, you may be filled with the utter fullness of God.

20 Glory be to him whose power, working in us, can do infinitely more than we can ask or imagine; 21 glory be to him from generation to generation in the Church and in Christ Jesus for ever and ever. Amen.

A Sunday School Song denied daily by our political choices

49 ‘I have come to bring fire to the earth, and how I wish it were blazing already!

50 There is a baptism I must still receive, and what constraint I am under until it is completed!

Of course religious notions of family and fatherhood are modelled on the human family. The language of God as father is derived from human experience of fathers. But notice what the writer to Ephesians does here: he insists that human fatherhood “takes its name” from God’s. This issues from a tradition of faith in which God is seen as both like and unlike human fathers; like in his authority over and love of his children; unlike in his utter faithfulness as father of all humanity with no favourites. At this point the concept of God can become a model for the concept of human fatherhood. The doctrine of the Trinity did not exist formally at the time of this letter but verses 16-19 are a good illustration of Trinitarian thinking: The SPIRIT casts out the powers which dominate the inner self and allows persons to grow; the SON comes, through trust, to take up residence within the person, leading her into a new shared identity with all believers, which is ultimately revealed as the fullness of the FATHER’S love, which fills all dimensions of the universe. This passage reminds readers of the genuine mysticism of faith which (a) looks for transformation of the believer into the image of God and (b) insists that this transformation is as much social as individual. Each one of us can be transformed into a child of God only as part of the whole family of God.

Jesus’ words spell out the antagonism of God’s family to the human family. The fire of conflict with the world’s values and the baptism of suffering which worldly people will inflict on their “enemy” are not unexpected by Jesus’ unsparing realism. His life will shatter the worldly peace in which families honour each other’s selfishness. Those who stand up for the greater family and the peace of God will find themselves at odds with other members of their own families. In this matter, demonstrations of attitude are no substitute for solidarity. 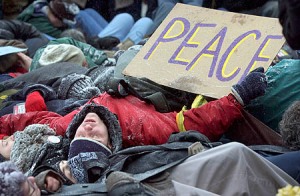 The British government’s ludicrous pretence that the UK is poor and that its poorest people have to bail it out encourages panic and selfishness. In such an atmosphere who will stand for a common good? Those who do so in action as well as word may very well gain the enmity of their own families. We know that Jesus’ family thought he was off his head. Dietrich Bonhoeffer tried to wean German believers away from family sentimentality by emphasising the “cost of discipleship” and preparing them for opposition.

Both lectionary passages today provide material for a radically Christian view of the family.