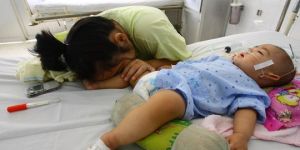 19At the third new moon after the Israelites had gone out of the land of Egypt, on that very day, they came into the wilderness of Sinai.2They had journeyed from Rephidim, entered the wilderness of Sinai, and camped in the wilderness; Israel camped there in front of the mountain.3Then Moses went up to God; the Lord called to him from the mountain, saying, ‘Thus you shall say to the house of Jacob, and tell the Israelites:4You have seen what I did to the Egyptians, and how I bore you on eagles’ wings and brought you to myself.5Now therefore, if you obey my voice and keep my covenant, you shall be my treasured possession out of all the peoples. Indeed, the whole earth is mine,6but you shall be for me a priestly kingdom and a holy nation. These are the words that you shall speak to the Israelites.’

7 So Moses came, summoned the elders of the people, and set before them all these words that the Lord had commanded him.8The people all answered as one: ‘Everything that the Lord has spoken we will do.’ Moses reported the words of the people to the Lord.9Then the Lord said to Moses, ‘I am going to come to you in a dense cloud, in order that the people may hear when I speak with you and so trust you ever after.’

When Moses had told the words of the people to the Lord,10the Lord said to Moses: ‘Go to the people and consecrate them today and tomorrow. Have them wash their clothes11and prepare for the third day, because on the third day the Lord will come down upon Mount Sinai in the sight of all the people.12You shall set limits for the people all around, saying, “Be careful not to go up the mountain or to touch the edge of it. Any who touch the mountain shall be put to death.13No hand shall touch them, but they shall be stoned or shot with arrows;* whether animal or human being, they shall not live.” When the trumpet sounds a long blast, they may go up on the mountain.’14So Moses went down from the mountain to the people. He consecrated the people, and they washed their clothes.15And he said to the people, ‘Prepare for the third day; do not go near a woman.’

16 On the morning of the third day there was thunder and lightning, as well as a thick cloud on the mountain, and a blast of a trumpet so loud that all the people who were in the camp trembled.

The passages dealing with the Sinai covenant have been edited and re-edited to produce the narrative we now have. While we may discern aspects of the story which may be more “primitive” than others, we can only interpret the text as it is. This section tells the reader some preliminary vital truths about the covenant betwen God and Israel:

1. Although it takes two to covenant and the people have a choice whether to do so or not, the initiative comes from the strange and terrifying God who has brought them out of Egypt “on eagle’s wings.” God is for Israel always already the God who rescues the people. This is so for Christian believers also. Although the context of faith is utterly different, few us will have difficulty in remembering how God has carried us “on eagle’s wings” and “brought us to himself”.

2. God is the God of all the earth but those who are covenanted with him are to be a kingdom of priests and a holy nation. On behalf of God’s earth this people must offer prayer and sacrifice while living according to the holy laws of God. The intimacy of the covenant relationship is a privilege but it functions as an invitation to all the earth to come to its God. Judaism still believes this is the privilege of Israel alone whereas Christians believe that it is shared by all who trust in God through Messiah Jesus. In either case it commits people to a life of practical holiness which is meant to be representative of all creatures and communicative to them.

3. God himself initiates the covenant by “coming down” to his people on Sinai. Whatever we make of the thunder, fire and smoke of Sinai, there is no doubt that the details are intended to emphasise God’s holiness, that is, his utter difference from his creatures. He is alien in a more profound sense that that of science fiction characters in that he is simply not part of this or any universe. That which meets the Israelites in the giving of the law is believed by them to have no origin in this world while being precisely and wonderfuly relevant to their life in this world. The same may be said of the that which meets Christians in the life, death and resurrection of Jesus. Those who approach such a being are reminded that any approach is at the peril of their lives. The canny author of the New Testament writing “Hebrews” noted that if Moses trembled at Sinai how much more should Christian believers tremble at standing before the “heavenly Jerusalem where millions of angels are gathered in festival; before … God himself ….and Jesus the mediator of a new covenant.” Shakers and Quakers have a valid point: God is not my pal.

7 But when he saw many Pharisees and Sadducees coming for baptism, he said to them, ‘You brood of vipers! Who warned you to flee from the wrath to come?8Bear fruit worthy of repentance.9Do not presume to say to yourselves, “We have Abraham as our ancestor”; for I tell you, God is able from these stones to raise up children to Abraham.10Even now the axe is lying at the root of the trees; every tree therefore that does not bear good fruit is cut down and thrown into the fire.

11 ‘I baptize you with* water for repentance, but one who is more powerful than I is coming after me; I am not worthy to carry his sandals. He will baptize you with* the Holy Spirit and fire.12His winnowing-fork is in his hand, and he will clear his threshing-floor and will gather his wheat into the granary; but the chaff he will burn with unquenchable fire.’

his winnowing fork is in his hand

John the Baptist, whose words these are, has all the eloquence of a street preacher I used to hear as a boy in Glasgow. He was pretty severe on a good day but if it was raining he could make your hair stand on end. It’s a convention of bad gospel preaching to note the contrast between John and Jesus. Jesus is supposed to be more kindly. Even a superficial reading of any gospel should get rid of that idea. Matthew gave us this prophecy of John’s because he saw that such a fundamental shaking of the tree of Israel was exactly what Jesus did; that accepting his call to discipleship was indeed the fiery baptism which had been foretold; and that his love was precisely the winnowing fork that separated the wheat from the chaff. Conversations with Moslems who relish the fierce righteousness of Mohammed (Peace upon him), reminded me of the fierceness of Jesus.

“Whoever puts his hand to the plough and turns back is not fit for the kingdom.”

“If you right eye offends you, pluck it out.”

“Not those who say “Lord, Lord,” but those who do the will of my father will enter the kingdom.”

“Don’t cast your pearls before swine.”

We want to say that these are all aspects of the love of Jesus Messiah, and that’s right. Love is more than justice but it is never less.

Tags: love not less than justice, on eagle's wings, somtimes it causes me to tremble