EVERY DAY 6000 PEOPLE IN THE UK START CARING FOR SOMEONE 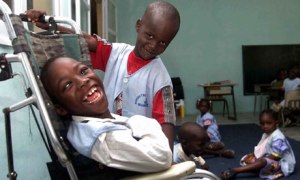 29After Jesus had left that place, he passed along the Sea of Galilee, and he went up the mountain, where he sat down. 30Great crowds came to him, bringing with them the lame, the maimed, the blind, the mute, and many others. They put them at his feet, and he cured them, 31so that the crowd was amazed when they saw the mute speaking, the maimed whole, the lame walking, and the blind seeing. And they praised the God of Israel. 32Then Jesus called his disciples to him and said, “I have compassion for the crowd, because they have been with me now for three days and have nothing to eat; and I do not want to send them away hungry, for they might faint on the way.” 33The disciples said to him, “Where are we to get enough bread in the desert to feed so great a crowd?” 34Jesus asked them, “How many loaves have you?” They said, “Seven, and a few small fish.” 35Then ordering the crowd to sit down on the ground, 36he took the seven loaves and the fish; and after giving thanks he broke them and gave them to the disciples, and the disciples gave them to the crowds. 37And all of them ate and were filled; and they took up the broken pieces left over, seven baskets full. 38Those who had eaten were four thousand men, besides women and children. 39After sending away the crowds, he got into the boat and went to the region of Magadan.

Jesus’ compassion is active in healing the broken bodies of men and women and children. Matthew is telling the reader that in Jesus Messiah God makes available to humanity the resources of life. Of course people of the time expected that in the “age to come” all illness would be cured; Jesus demonstrated by his own human initiative, that the “age to come ” could break into the present age, so that God’s goodness could rule on earth “as it is in heaven.”

One of the discoveries of the modern age is that the world has been given the resources to heal many if not all illnesses, and that the only reason this is not happening is human greed. Why are there not good medical resources in every country in the world? Because often their own ruling classes have decided to spend money on weapons and palaces rather than care of their population; and because many healing resources are in the hands of large multinational corporations whose only concern is profit.

Jesus’ miracle of loaves and fish is a sign of contradiction to the scarcity economists: there are plentiful resources for feeding and healing in our world; only evil prevents them being fully used for all. How do we make them available? Jesus shows the way. He trusts in God’s goodness and he does all that he can. He begins a rebellion against all that diminishes life by refusing to accept the status quo. The goodness of God enters the world through those who trust in it and do what they can.

In the UK this is National Carers Week, when we are asked to think of the daily miracles accomplished by carers of all ages (some as young as 8 years) who provide daily practical help for loved ones or neighbours. Their effort could easily be rewarded by the provision of better community services, but we as a nation have decided we prefer better wine, faster cars, and weapons of mass destruction. Jesus suggested that when the nations are judged by God, those who have failed in their duty of care may find themselves uncomfortably near the fires of hell.

Tags: all we need for universal care is already here, Feeding of 4000, National Carers Week (UK)