This blog offers a meditation on the Common Lectionary daily readings along with a headline from world news. See also MY NEW BLOG,  emmock2.com, “I MIGHT BE WRONG”, which invites theological debate.

ARAFAT MAY HAVE BEEN POISONED, TESTS SHOW 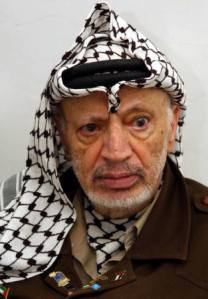 The Death of John the Baptist

14 At that time Herod the tetrarch heard reports about Jesus, 2 and he said to his servants, “This is John the Baptist. He has been raised from the dead! And because of this, miraculous powers are at work in him.” 3 For Herod had arrested John, bound him, and put him in prison on account of Herodias, his brother Philip’s wife, 4 because John had repeatedly told him, “It is not lawful for you to have her.” 5 Although Herod wanted to kill John, he feared the crowd because they accepted John as a prophet. 6 But on Herod’s birthday, the daughter of Herodias danced before them and pleased Herod, 7 so much that he promised with an oath to give her whatever she asked. 8 Instructed by her mother, she said, “Give me the head of John the Baptist here on a platter.” 9 Although it grieved the king, because of his oath and the dinner guests he commanded it to be given. 10 So he sent and had John beheaded in the prison. 11 His head was brought on a platter and given to the girl, and she brought it to her mother. 12 Then John’s disciples came and took the body and buried it and went and told Jesus.

Matthew gets this story from his main source, the Gospel of Mark, and he slightly shortens Mark’s narrative. Both gospel writers present Herod in contrast to Jesus. Both are rulers, but Herod is the type who almost literally in this case, feeds on his people; whereas Jesus is the one who feeds his people, as can be seen in the next passage, from verse 13 onwards. It’s not clear where Mark got the story which bears the marks of popular narrative, but may nevertheless be substantially accurate. Herod did dismiss his first wife and took his younger brother’s wife to be his own. It’s quite likely that John the Baptist denounced this behaviour and found himself imprisoned for so doing. The incident of the dancing princess, which has so fascinated readers down the ages, may not be so accurate, but gives a popular view of the character of Herod’s court as riddled with luxury, plots and inhumanity. The life of a very great prophet is brought to this brutal end for no better reason than to save face.

Matthew, following Mark, gives a realistic image of the kind of rule which exercises power for its own advantage and has no care for justice or for the needy of society, the “widow, the orphan and the foreigner.” It’s clear that these faults are not limited to absolute rulers like Herod but can be found even within democratic governments. Recently the UK government refused to condemn the behaviour of its police in infiltrating perfectly legal protest organisations and developing sexual relationships with some of their female members to gain information. As in the case of Herod, people were used as disposable pawns in an illegal and unnecessary power game. The benefit of democracy is that we, unlike Herod’s subjects, can hold our rulers to account; but it is very doubtful that we can do so with regard to our secret services, who always say they are acting to protect us. If we want prevent powerful people from committing the sort of ruthless brutality depicted in the Herod story, we may have to refuse the so-called protection of secret services and make sure that every agent of the state is named and accountable.