Many feared dead in Philippines Typhoon 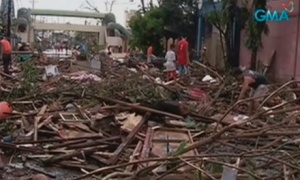 22 Immediately Jesus made the disciples get into the boat and go ahead of him to the other side, while he dispersed the crowds. 23 And after he sent the crowds away, he went up the mountain by himself to pray. When evening came, he was there alone. 24 Meanwhile the boat, already far from land, was taking a beating from the waves because the wind was against it. 25 As the night was ending, Jesus came to them walking on the sea. 26 When the disciples saw him walking on the water they were terrified and said, “It’s a ghost!” and cried out with fear. 27 But immediately Jesus spoke to them: “Have courage! It is I. Do not be afraid.” 28 Peter said to him, “Lord, if it is you, order me to come to you on the water.” 29 So he said, “Come.” Peter got out of the boat, walked on the water, and came toward Jesus. 30 But when he saw the strong wind he became afraid. And starting to sink, he cried out, “Lord, save me!” 31 Immediately Jesus reached out his hand and caught him, saying to him, “You of little faith, why did you doubt?” 32 When they went up into the boat, the wind ceased. 33 Then those who were in the boat worshiped him, saying, “Truly you are the Son of God.”

34 After they had crossed over, they came to land at Gennesaret. 35 When the people there recognized him, they sent word into all the surrounding area, and they brought all their sick to him. 36 They begged him if they could only touch the edge of his cloak, and all who touched it were healed.

What does Matthew mean by “Jesus walking on the water”? He means that Jesus is the crucified Lord.

Let me explain. The event in this passage is not something that happened one day in Galilee; it is something that happened in the life of disciples of Jesus then and continues to happen now. In the ship of faith we are forever running into “bad weather”, and not just any old bad weather, but the terrifying forces of evil. The raging sea in the bible is always a sign of the evil which resists the creative rule of God. God allows it to exist “above the earth” from where it may fall as deluge, and “below the earth” from where it surge upwards as flood.

When the ship of faith is at risk Jesus comes to its fearful sailors, walking on the water: that is, he treads the evil underfoot and renders it harmless. How does he do this? He refuses to run away from opposition, he accepts his suffering and death, trusting that God will raise him up and give him victory over evil. As the crucified and risen Lord, he always comes to be with his disciples in their struggle with evil and fear. His disciples know that they can learn from him how to win the struggle, but as the incident with Peter shows, the fear of suffering and death can make a small faith useless. This detail points forward both to Peter’s betrayal of Jesus and to Jesus’ ultimate forgiveness of him.

When I attempt to explain the meaning of this passage, I am always impressed with the economy and power of the passage itself. It asks me to translate my worst nightmares into a vast and stormy sea, across which Jesus comes to me, walking on the water.

The final verses of the passage above, show that just as Jesus gives himself to the forces of evil and conquers them, so also he takes into himself the evils that beset human beings and thereby provides a cure.