18-19 The Jews did not really believe that the man had been blind and then had become able to see, until they had summoned his parents and asked them, “Is this your son who you say was born blind? How does it happen that he can now see?”

20-21 “We know that this is our son, and we know that he was born blind,” returned his parents, “but how he can see now, or who made him able to see, we have no idea. Why don’t you ask him? He is a grown-up man; he can speak for himself.”

22-23 His parents said this because they were afraid of the Jews who had already agreed that anybody who admitted that Christ had done this thing should be excommunicated. It was this fear which made his parents say, “Ask him, he is a grown-up man.”

24 So, once again they summoned the man who had been born blind and said to him, “You should ‘give God the glory’ for what has happened to you. We know that this man is a sinner.”

26 “But what did he do to you—how did he make you see?” they continued.

27 “I’ve told you before,” he replied. “Weren’t you listening? Why do you want to hear it all over again? Are you wanting to be his disciples too?”

28-29 At this, they turned on him furiously. “You’re the one who is his disciple! We are disciples of Moses. We know that God spoke to Moses, but as for this man, we don’t even know where he came from.”

30-33 “Now here’s the extraordinary thing,” he retorted, “you don’t know where he came from and yet he gave me the gift of sight. Everybody knows that God does not listen to sinners. It is the man who has a proper respect for God and does what God wants him to do—he’s the one God listens to. Why, since the world began, nobody’s ever heard of a man who was born blind being given his sight. If this man did not come from God, he couldn’t do such a thing!”

34 “You misbegotten wretch!” they flung back at him. “Are you trying to teach us?” And they threw him out.

35 Jesus heard that they had expelled him and when he had found him, he said, “Do you believe in the Son of Man?”

39 Then Jesus said, “My coming into this world is itself a judgment—those who cannot see have their eyes opened and those who think they can see become blind.”

40 Some of the Pharisees near him overheard this and said, “So we’re blind, too, are we?”

41 “If you were blind,” returned Jesus, “nobody could blame you, but, as you insist ‘We can see’, your guilt remains.”

This black comedy may reflect some of the animosity between official Judaism and Christian believers at the time the Gospel was written as well as documenting the antagonism of the Pharisees to Jesus’  ministry. The comedy consists in showing the Pharisees becoming more and more unreasonable while the healed man and his parents are models of good sense and decency.

The comedy depicts the way in which dogmatic, arrogant, religious beliefs can lead people to deny the evidence of their own eyes: if faith says it cannot happen, it did not. If faith says that someone is a bad man then he cannot do anything good. If faith says that certain people are blasphemers, then God will command their killing. Richard Dawkins goes on about the danger of believing things without proof, and criticises all people of faith for their credulity. One can see the point of his criticism in this bible passage. But, in fact, dogmatic religion is just as much an enemy of true faith as it is of science. The author of this Gospel shows that faith is not believing “ten impossible things before breakfast” but opening one’s eyes to see the world without the veils of dullness, prejudice and pride.

The healed man sees quite clearly what the religious authorities are trying to do, and even begins to tease them a bit. With splendid common sense he sticks to the facts: “I was blind, but now I see.”

John Newton’s great hymn, written in the knowledge of his own participation in the slave trade, uses these words to confess his terrible blindness.

According to Jesus the real fault is not moral and spiritual blindness- all human beings are afflicted in this way-but rather arrogant preference for the blindness we have chosen in the face of the offer of sight. Looking back on my life I can see, so clearly now, the times I refused to be enlightened, and continued to act blind to the truth about myself and others. My own experience leads me to confess that this blindness was particularly evident in my life when I arrogantly thought I was in the right, rather than when I knew I was in the wrong. The “sinners” flocked to Jesus; the “righteous” stayed away. 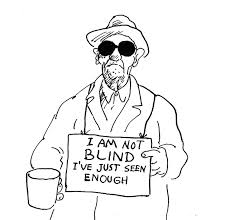 sight is not an unmixed blessing

Those who have killed brave medical staff because what they are doing is seen as contrary to their faith; those who have  threatened doctors who work in abortion clinics; those who have sent their citizens to concentration camps for challenging their state ideology; these, along with preachers of the gospel who are blind to their own faults, should listen very carefully to the message of John chapter 9.

Tags: blind but now I see/ Dawkins/ what blindness lets us do