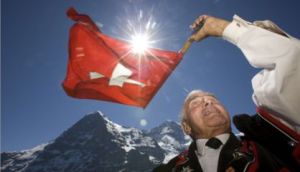 Jesus and blindness, physical and spiritual

9 Later, as Jesus walked along he saw a man who had been blind from birth.

2 “Master, whose sin caused this man’s blindness,” asked the disciples, “his own or his parents’?”

3-5 “He was not born blind because of his own sin or that of his parents,” returned Jesus, “but to show the power of God at work in him. We must carry on the work of him who sent me while the daylight lasts. Night is coming, when no one can work. I am the world’s light as long as I am in it.”

6-7 Having said this, he spat on the ground and made a sort of clay with the saliva. This he applied to the man’s eyes and said, “Go and wash in the pool of Siloam.” (Siloam means “one who has been sent”.) So the man went off and washed and came home with his sight restored.

8 His neighbours and the people who had often seen him before as a beggar remarked, “Isn’t this the man who used to sit and beg?”

10 “Then how was your blindness cured?” they asked.

11 “The man called Jesus made some clay and smeared it on my eyes,” he replied, “and then he said, ‘Go to Siloam and wash.’ So off I went and washed—and that’s how I got my sight!”

13-15 So they brought the man who had once been blind before the Pharisees. (It should be noted that Jesus made the clay and restored his sight on a Sabbath day.) The Pharisees asked the question all over again as to how he had become able to see. “He put clay on my eyes; I washed it off; now I can see—that’s all,” he replied.

16-17 Some of the Pharisees commented, “This man cannot be from God since he does not observe the Sabbath.” “But how can a sinner give such wonderful signs as these?” others demurred. And they were in two minds about him. Finally, they asked the blind man again, “And what do you say about him? You’re the one whose sight was restored.” “I believe he is a prophet,” he replied. 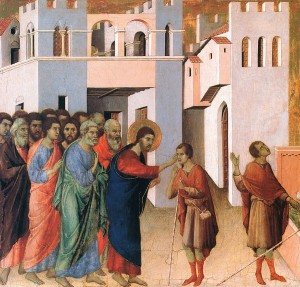 The opening question about the blind man is crucial. The disciples express a common belief that disease is a punishment for sin. Jesus rejects this brutal interpretation: in effect, he says, a sick person is an opportunity for healing which will show the goodness of God. We should note that Jesus simply dismisses the issue of the origin of disease. He’s not interested in an argument which tries to justify the creator by ascribing disease to sin; a diseased person brings God’s imperative that he/she should be cured.

John depicts Jesus behaving as a healer might behave; he uses the dust of the earth to make a healing paste. Perhaps John wants to emphasise that Jesus does not merely wave an arm, but actually works to heal the man. This gives some substance to the Pharisees’ opposition. Perhaps also it also shows that the dust of which human beings are made and to which they will return, can in the hands of Jesus become a medium of life. This is the basis in faith for the free provision of medical care in every country. Nobody should go without medical care because they are poor. It is to the glory of God that the Commonwealth enables skilled practitioners to offer free care to all. Here, he enables Jesus.

The healed man is clear in the face of scepticism; he knows who is he is, who he was, and who was responsible for the change. His sanity never wavers throughout the controversies that ensue in the rest of the chapter and his faith in Jesus increases. The reader is asked to realise that the formerly blind man can indeed “see” and that the religious authorities are indeed blind. The truth is

simple; a diseased man has been cured, to God’s glory. Only seriously sick people can make it complicated. The narrator shows clearly the nature of corrupt religion, which often tells us that white is black. Those, like me, who have gained a livelihood from religion, have to ask ourselves about our complicity with thugs who know how to cloak their prejudices in piety.

Tags: none so blind..., religious corruption, was blind but now