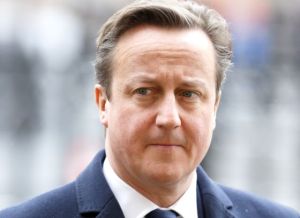 Jesus is taken before the Roman authority

28 Then they led Jesus from Caiaphas’ presence into the palace. It was now early morning and the Jews themselves did not go into the palace, for fear that they would be contaminated and would not be able to eat the Passover.

29 So Pilate walked out to them and said, “What is the charge that you are bringing against this man?”

30 “If he were not an evil-doer, we should not have handed him over to you,” they replied.

31-32 To which Pilate retorted, “Then take him yourselves and judge him according to your law.” “We are not allowed to put a man to death,” replied the Jews (thus fulfilling Christ’s prophecy of the method of his own death).

33 So Pilate went back into the Palace and called Jesus to him. “Are you the king of the Jews?” he asked.

34 “Are you asking this of your own accord,” replied Jesus, “or have other people spoken to you about me?”

35 “Do you think I am a Jew?” replied Pilate. “It’s your people and your chief priests who handed you over to me. What have you done, anyway?”

37 “So you are a king, are you?” returned Pilate. “Indeed I am a king,” Jesus replied; “the reason for my birth and the reason for my coming into the world is to witness to the truth. Every man who loves truth recognises my voice.”

38-39 To which Pilate retorted, “What is ‘truth’?” and went straight out again to the Jews and said: “I find nothing criminal about him at all. But I have an arrangement with you to set one prisoner free at Passover time. Do you wish me then to set free for you the ‘king of the Jews’?

Pontius Pilatus is one- dimensional man: he reckons with worldly power and nothing else. He operates as part of a world empire that expects its rule to be obeyed; he doubtless believes that Roman rule brings immense benefits to barbarian cultures like Judaea. Of course he knows philosophy, literature and art, just as he knows personal relationships, but these are matters of private enjoyment. The world works by the rational use of power: wealth, force, technology and administration. He is very like a decent British administrator in the Raj or an American attache in 1980’s South America; if the natives grow restless or become a threat to imperial interests, they have to be disciplined, for their own good.

John imagines that’s how Pilate would have approached the task of dealing with Jesus.  I say “imagines” because of course nobody would have known the content of such conversations. It is a subtle characterisation. He doesn’t make Pilate obviously cruel, or oppressive. Rather he’s a slightly weary, worldly-wise man, known to have executed messianic pretenders, convinced that there is no sensible alternative to a world order that gives him the right to command and others the obligation to obey. In this conviction he will kill without mercy if he thinks it necessary.

In this instance, he begins by asking Jesus to condemn himself by declaring himself Messiah. Jesus counters with a question of his own, an impertinence that Pilate rejects. He’s not a member of a slave nation and doesn’t need to understand their petty squabbles. Then Jesus explains that his kingdom, his capacity to rule, is not derived from any worldly power, and that his servants use no force. Pilate is probably reassured that Jesus is some kind of religious nutter, so he asks about the nature of this odd kingship. Jesus says he is a witness to the truth – the Greek word means unconcealment- and that lovers of the truth will recognise his voice, that is, his authority.

Pilate is impatient with this sort of stuff-all very well in the Academy maybe, but gets no marks in the real world. “What is truth? Wake up and smell the coffee, King Jesus!” But he thinks the man is no danger so offers to set him free as a Passover treat for the natives.

Jesus insists that there is another dimension, a truth that owes nothing to the empire, its troops, its engineers, its arenas, its poets, its laws, and its provincial governors, and which contradicts its power with the naked truth of God’s love. There is a source of goodness which enables powerless people like Jesus to look worldly power in the face without fear or hatred. Of course this seems delusional to Pilate but he is also somehow impressed, and attempts to save this hedgerow king from the consequences of his madness. 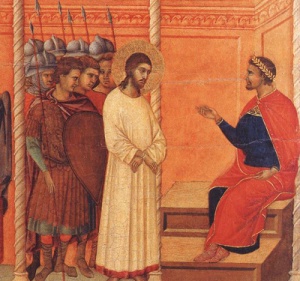 This is John’s portrait of the conflict between the representative of world empire and the representative of God’s truth. Jesus acts with quiet dignity while making the great refusal: he will not allow the world to be closed off from all truth other than the one imposed by power. Pilate’s impatience proves that he is no lover of the truth because he is deaf to Jesus’ voice, just as the many voices of worldly powers are deaf to the truth about the Ukraine. All the powers engaged have in one way or another intervened, invaded, oppressed or destabilised other nations when their own interests were at stake. That’s the way the world works, baby. And no protestations from international criminals like the U.S or the U.K will erase the record of what they have recently done. In this instance, those who stand for the truth that human beings ought to be more than the playthings of competing empires, will be able to draw on resources of courage and calmness that are not available to servants of empire. They may not be able to save their nation but their witness will nevertheless be fruitful. And perhaps, even a small acknowledgement of past crimes (truth=unconcealment) by Russia’s opponents might lead to a more fruitful negotiation.

Tags: Jesus before Pilate, Speaking the truth to power, the power that is not from this world