This blog offers a meditation on the Common Lectionary daily readings along with a healine from world news:

1 1-3 Paul, commissioned by the will of God as a messenger of Jesus Christ, and Sosthenes, a Christian brother, to the church of God at Corinth—to those whom Christ has made holy, who are called to be God’s men and women, to all true believers in Jesus Christ, their Lord and ours—grace and peace be to you from God the Father and the Lord, Jesus Christ!

I am thankful for your faith

4-9 I am always thankful to God for what the gift of his grace in Jesus Christ has meant to you—how, as the Christian message has become established among you, he has enriched your whole lives, from the words on your lips to the understanding in your hearts. And you have been eager to receive his gifts during this time of waiting for his final appearance. He will keep you steadfast in the faith to the end, so that when his day comes you need fear no condemnation. God is utterly dependable, and it is he who has called you into fellowship with his Son Jesus Christ, our Lord.

But I am anxious over your “divisions”

10-12 Now I do beg you, my brothers, by all that Christ means to you, to speak with one voice, and not allow yourselves to be split up into parties. All together you should be achieving a unity in thought and judgment. For I know, from what some of Chloe’s people have told me that you are each making different claims—“I am one of Paul’s men,” says one; “I am one of Apollos’,” says another; or “I am one of Cephas’”; while someone else says, “I owe my faith to Christ alone.”

Do consider how serious these division are!

13 What are you saying? Is there more than one Christ? Was it Paul who died on the cross for you? Were you baptised in the name of Paul?

14-17 It makes me thankful that I didn’t actually baptise any of you (except Crispus and Gaius), or perhaps someone would be saying I did it in my own name. (Oh yes, I did baptise Stephanas’ family, but I can’t remember anyone else.) For Christ did not send me to see how many I could baptise, but to proclaim the Gospel. And I have not done this by the persuasiveness of clever words, for I have no desire to rob the cross of its power.

18 The preaching of the cross is, I know, nonsense to those who are involved in this dying world, but to us who are being saved from that death it is nothing less than the power of God.

19 It is written: ‘I will destroy the wisdom of the wise, and bring to nothing the understanding of the prudent’.

Paul’s greetings and thanksgivings as always emphasise his gospel, in this case, the progressive growth in holiness expected of believers who await the return of Jesus Messiah. He moves on quickly to denounce the existence of parties/ cliques in the church community. People are forming sub-groups based on their favourite missionary or the one who baptised them. Paul urges the centrality of Jesus Messiah, whose death on the cross must not be made irrelevant by fancy preaching or special group theologies. Jesus’ death, he reminds them, is the power of God which sounds daft to worldly people who look for power and smart spiritualities. 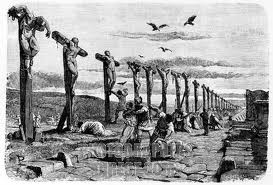 defeated rebel slaves crucified on the Via Appia

We are so familiar with the cross as a symbol that it’s hard for us, believers or non-believers, to recognise how offensive it must have seemed then. Paul does not gloss over the death of the Messiah on a Roman instrument of torture and disgrace. Perhaps it would have been less offensive if it had been preached as an insult to be avenged. But to announce it, as Paul did, as a supreme instance of God’s love, must have seemed perverse to many Corinthians.

That’s what Paul announced. Maybe he knew that this was the point in the Jesus’ story where his own sin and his own salvation were simultaneously addressed: his murderous cruelty towards Jesus’ followers which “filled out the sufferings of the Messiah” whose love offered him freedom from sin and death. For him the cross marked the beginning of the “world to come” in which the gospel announcement would extend the offer of God’s love to the ends of the earth.

The speed with which Paul moves from what could have been a barren argument about the merits of different apostles, to the heart of the Christian message, is exemplary. In any issue of church life, the outcome should not be determined by casuistry but by an appeal to the cross of Jesus.

Tags: Christian Cliques, The Gospel Announcement, The Power of the Cross