The message of the cross is daftness to those who are dying, but to those who are being rescued; it is the power of God. As Scripture says, I will destroy the wisdom of the wise, and the opinion of the pundit I will disregard.

Show me the wise; show me the scholar; show me the intellectual of our times-God has turned their worldly wisdom into daftness; for since, in the wisdom of God, the world through its wisdom did not know him, it delighted God through the daftness of the Announcement, to rescue those who trust in him.

Now Jews demand miracles and Greeks seek wisdom, but we announce a crucified Messiah, offensive for Jews and daft for Gentiles, but for those whom God has called, Jews and Greeks alike, a Messiah who is God’s power and God’s wisdom.

By God’s action, you are in Messiah Jesus, who has, through God, become our wisdom, justice, holiness and liberation; so as scripture says, Boaster, boast in the Lord!” 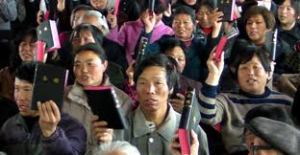 Chinese House Church-not many wise, not many powerful….

I’ve used my own translation today, to emphasise Paul’s bold vocabulary, especially in his use of the Greek, moros, here translated “daft”. It indicates mental incapacity and would certainly have been considered offensive as applied to God, and especially offensive by Corinthians who may have fancied themselves as sophisticated Christians. Paul is defending what I’ve translated as “The Announcement”; the word he uses indicates something made public.It’s not just “preaching” as often it’s translated, but more like the public proclamation by an official of the city or empire. That’s how he sees himself; as someone announcing an authoritative message.

But this announcement is daft, crazy, contrary to all proper standards of common sense and intellectual respectability. It tells people that God is downwardly mobile; that out of a stupid love of humanity he has entered the world in his human son, in an obscure part of the Empire, in a man of no rank, to suffer rejection by his own people and ignominious death at the hands of the Empire-so that all people without exception should know the embrace of his love.

For that reason anyone who wants to be upwardly mobile, in wealth, social status, intellectual or spiritual standing has to be told that they are going on the up-stair of the escalator while God is on the down. Paul is quite clear that the reason for God’s daft behaviour is to make sure that his goodness is received as a gift and not an achievement. The poor in status, wealth and “spirit” are ready to receive God’s blessing, whereas the powerful want it as their due. In hellenistic societies the mutuality of favours was important. You scratch my back and I’ll scratch yours. Here Paul suggests that God’s goodness cuts through all mutuality: the greatest has come to the least who can return only gratitude and love.

With some degree of impertinence Paul asks his converts to remember what they are. Very few have any status within their social system, most would be considered as the lower orders of society, and some would be altogether below the register of social recognition. Yet, Paul reminds them, they have been chosen by God to represent his empire in the world. They have been incorporated in the crucified Messiah Jesus, that is,in the Christian community, where wisdom, justice, holiness and liberation are received as shared gifts rather than as individual achievement. 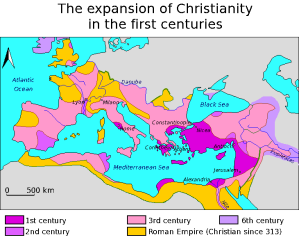 the church in the Empire

For Paul, arrogance, the desire to boast, is the sin of Adam. It is snatching at equality with God and living in constant competition with other men and women. God’s empire in the world, called into existence by the Announcement about the crucified Messiah, is truly a new creation, of which God’s daft humility is the founding principle. From inside the Roman Empire this community challenges its arrogance. No human wisdom can rival the daftness of God; no human strength can match God’s weakness, so no flesh and blood can boast in God’s presence.

In response to what might seem trivial to worldly eyes – the existence of cliques in a faith community- Paul opens up his counter- cultural gospel which is as challenging today as it was then and faithful to Jesus whose greatest concern was for the “little ones”.

Tags: blessed are the poor, Downwardly mobile God, The daftness of God