This blog offers a meditation on the Common Lectionary daily readngs along with a headline from world news:

PROTESTS AGAINST AUSTERITY IN SPAIN 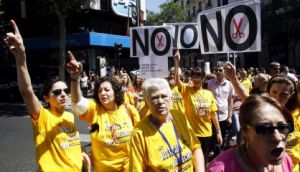 Jesus said, “The kingdom of heaven is like an employer who went out in the early morning to hire laborers for his vineyards. 2 He agreed with the laborers to pay them the standard daily rate of two silver coins, and sent them into his vineyard. 3 On going out again, about nine o’clock, he saw some others standing in the marketplace, doing nothing. 4 ‘You also may go into my vineyard,’ he said, ‘and I will pay you what is fair.’ 5 So they went. Going out again about midday and about three o’clock, he did as before. 6 When he went out about five, he found some others standing there, and said to them ‘Why have you been standing here all day long, doing nothing?’ 7 ‘Because no one has hired us,’ they answered. ‘You also may go into my vineyard,’ he said. 8 In the evening the owner of the vineyard said to his steward ‘Call the laborers, and pay them their wages, beginning with the last, and ending with the first. 9 Now when those who had been hired about five o’clock went up, they received two silver coins each. 10 So, when the first went up, they thought that they would receive more, but they also received two silver coins each; 11 at which they began to grumble at their employer. 12 ‘These last,’ they said, ‘have done only one hour’s work, and yet you have put them on the same footing with us, who have borne the brunt of the day’s work, and the heat.’ 13 ‘My friend,’ was his reply to one of them, ‘I am not treating you unfairly. Didn’t you agree with me for two silver coins? 14 Take what belongs to you, and go. I choose to give to this last man the same as to you. 15 Don’t I have the right to do as I choose with what is mine? Are you envious because I am generous?’ 16 So those who are last will be first, and the first last.”

Once the employer’s unconventional generosity is known he may find that there’s no-one there first thing in the morning. Still, Jesus emphasises that the wage each worker gets is the standard day-wage, which they all need regardless of when they started work. Any story about a vineyard told in Israel would be immediately interpreted by listeners as a story about Israel, which was traditionally depicted as God’s vine or vineyard. (See Isaiah 5), but that interpretation doesn’t seem quite to fit this one, which is focused almost entirely on the strange actions of the employer, who pays more than he needs to, and risks alienating the decent workers who have toiled all day. If the criticism of the workers reminds us of the criticism of the elder son in the story of the Lost Son, that’s no accident, for both are reactions to behaviour which seems dangerously generous on the part of the employer and the father. In this instance, it is a generosity which takes acount of need and makes sure it is met. God’s rule will meet the needs of those whom society places last to the chagrin of those whom it places first.

God does not run a scarcity economy; there is more than enough for all. Why should anyone pretend there isn’t? Only because some are determined to have more than enough for themselves. This applies as much to a spiritual economy as to a material one. Many leaders of religion want to make spiritual wealth hard to to get because this ensures their own superior status. Jesus’ “employer” reveals that there’s enough for all and that all spiritual and material needs can be met.

Is this unrealistic or perhaps only applicable to spiritual matters?

The UK government says it wants to make work pay by reducing benefits for the unemployed. (They are running a scarcity economy). It hasn’t been effective because employers don’t have to

compete with decent benefits and can offer part-time work, miserable conditions and low pay. So the government still has to pay benefits to people who are poorly paid. If instead the government had made a significant increase in the minimum wage and protected the rights of part-time workers, might this not have succeeded? The prevailing wisdom of our capitalist economy is to disregard human need and to promote austerity. Jesus’ “employer” meets need and reveals abundance.

It is this “new economy” which was revealed in the ministry of Jesus, through which there was suddenly an abundance of resources to meet the bodily and siritual needs of human beings. But the authors of austerity made sure, as they thought, that it didn’t last too long.

Tags: austerity, labourers in the vineyard, more than enough for all