This blog offers a meditation on the Common Lectionary daily readings along with a healine from world news: 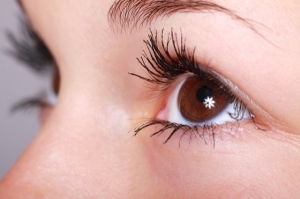 29 As they went out from Jericho, a great multitude followed him. 30 Behold, two blind men sitting by the road, when they heard that Jesus was passing by, cried out, “Lord, have mercy on us, you son of David!” 31 The multitude rebuked them, telling them that they should be quiet, but they cried out even more, “Lord, have mercy on us, you son of David!” 32 Jesus stood still, and called them, and asked, “What do you want me to do for you?” 33 They told him, “Lord, that our eyes may be opened.” 34 Jesus, being moved with compassion, touched their eyes; and immediately their eyes received their sight, and they followed him.

The reader should compare this with what Matthew found in his source, namely Mark 10:46-52, and ask what effect Matthew’s changes have. Let’s assume that stories about Jesus healing blind people circulated in the oral tradition of the first believers. It may be that the name Bartimaeus, as used by Mark, comes from that tradition.

Mark’s account, albeit brief, is full of details which emphasise the physicality of this event. The blind man cries out repeatedly, the bystanders tell him to get up, he rushes towards Jesus, he demands to see. Jesus tells him his trust has saved him. Matthew invents an extra beggar. I don’t undertsand why he does this – he also adds an extra in the story of the Gerasene madman /men- but it is less vivid than the solitary blind beggar in Mark. He also misses out most of the vivid detail, giving the reader just the essentials. There are two changes that stand out. In Matthew’s version the men ask that “their eyes should be opened” and Jesus responds by “touching” their eyes. 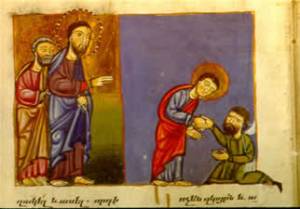 Both authors are concerned to use the incident to say something about spiritual blindness.

Mark focuses on the blindness of the disciples who don’t fully comprehend Jesus’ mission. Blind Bartinaeus gives Jesus his title as Messiah (Son of David) and by his whole behaviour demands entry to Jesus’ compassion. He is given a bodily presence in the story; by his energy he responds to the act of Jesus’ presence. Finally he follows Jesus “on the way”. Matthew focuses on the need of the blind men, specifically a need for opened eyes. They cry out to Jesus as Messiah, but they are given no physical prsence in the story. Jesus takes centre stage, he stands still, he is moved with compassion, he touches their eyes. They are cured and follow him.

Mark depicts Jesus as an explosion of healing and liberation, battling against the evil powers that diminish human life, arousing a physical as well as spiritual response from people. Matthew depicts Jesus as the one who takes upon himself the illnesses of his people; and by his words and deeds opens their eyes to the compassion of God. This variation in the depiction of Jesus shows the freedom with which the Gospel writers treated the traditions they received, in order to enrich their readers experience of Jesus’ life. Both authors however agree that their readers should have their eyes opened to the truth of Jesus and should “follow” him – a word which means especially to follow Jesus on the road to Jerusalem, to the place of conflict, suffering, death and resurrection.

Questions have been raised about the whole tradition of Jesus’ healings which take for granted that congenital abnormality and physical illness or injury are a) DIS-abling and b) linked to EVIL spiritual powers, by people with disabilities. They see these assumptions as in themsleves dis-abling and supportive of social exclusion. I think these are helpful questions which rest however on a misreading of the stories. I was listening to an account yesterday on the radio of an African boy born with a club foot. From birth his was stigmatized by his family and his community because they assumed his abnormaility was linked to evil spirits. Worse, he himself grew up believing that it must be his fault, some  wrongness in his character which had allowed these spirits in. He could not go to school, or play with other children; he had no work, no place in the world. By chance a medical team came across him and gave him the relatively simple operation which corrected his malformation and allowed him  to walk. Best of all, he came to realise that he was not responsible for his problem, he was as important a person as anyone else. 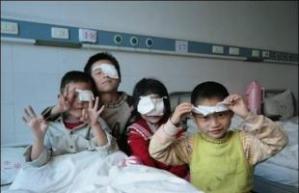 The condition of blind and crippled people in Jesus’ culture would have been similar to the boy’s: they were subject to fearful prejudice and exclusion from community. The evil spirits aganst whom Jesus battled were just these exclusive powers. His healings are first of all declarations of the full humanity of the sufferers as determined by God’s goodness, recreating their whole beings, souls, spirits and bodies. The healings are signs of a new creation breaking into the old, touching ordinary men, women and children, excluded from ordinary life, in insignificant villages in a backwater of the Roman Empire. All good medicine is also a sign of God’s goodness which is utterly opposed to all stigma and exclusion.