TIM HOWARD SAVES AND IS SAVED BY GOD’S LOVE

The USA goalkeeper is an enthusiastic Chritian believer

Once more Jesus spoke to them in parables. 2 “The kingdom of heaven,” he said, “may be compared to a king who gave a banquet in honor of his son’s wedding. 3 He sent his servants to call those who had been invited to the banquet, but they were unwilling to come. 4 A second time he sent some servants, with orders to say to those who had been invited ‘I have prepared my breakfast, my cattle and fat beasts are killed and everything is ready; come to the banquet.’ 5 They, however, took no notice, but went off, one to their farm, another to their business; 6 while the rest, seizing his servants, ill-treated them and killed them. 7 The king, in anger, sent his troops, put those murderers to death, and set their city on fire. 8 Then he said to his servants ‘The banquet is prepared, but those who were invited were not worthy. 9 So go to the cross-roads, and invite everyone you find to the banquet.’ 10 The servants went out into the roads and collected all the people whom they found, whether bad or good; and the bridal-hall was filled with guests. 11 But, when the king went in to see his guests, he noticed there a man who had not put on a wedding-robe. 12 So he said to him ‘My friend, how is it that you came in here without a wedding-robe?’ The man was speechless. 13 Then the king said to the attendants ‘Tie him hand and foot, and ‘put him out into the darkness’ outside, where there will be weeping and grinding of teeth.’ 14 For many are called, but few chosen.”

This is a savage variation of  Jewish religious story which features God the King arranging the wedding of his son the Messiah to Israel his bride. This is a metaphor for the arrival of God’s kingdom. Jesus takes the storyline and twists it by making the invited guests (the religious leaders of Israel) refuse to attend and even kill the king’s messengers, with predictable results: they and their city are punished severely. (This may be a reference to the Roman destruction of Jerusalem in 70CE). Jesus has made a prophetic story of his own and his messengers’ rejection by “official” Judaism.

The story however continues with the King’s pressing invitation to all whether good or bad to attend the messianic banquet. This is a fairly unflattering picture of Jeus’ mission and that of his apostles: they are gathering riff-raff for God’s kingdom! Indeed the King welcomes all-comers but even they are expected to understand  how honoured they are and to dress appropriately. The open invitation of the gospel is not to be treated with casual disrespect; only those who are ready to match their lifestyle to the way of the kingdom are truly “chosen”.  Theologians who like a harsh view of predestination have often used this phrase  as a proof text for their view that God has determined in advance who will respond to his love; while their opponents point to the totally undiscriminating nature of the invitation and the human choice of wearing or not wearing a wedding robe as evidence of God’s universal love and human free will. Subtler minds may see God’s use of an invitation which can easily be refused or disrespected as itself a pre-destination of those who truly want to come. 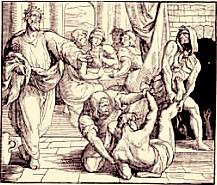 The harsh tone of the parable suggests the edgy vulnerability of a  God who puts his majesty at risk by inviting rather than commanding human participation in his rule. The darkness outside is Matthew’s picture of the hurt love of God.

I’ve found that it’s a good principle not to intepret Jesus’ parables as simply pointing to two groups of people (the sheep and the goats), but to two responses both of which may co-exist in the one group or even the one person. The line that divides refusal from acceptance of God’s kingdom, or casual disrespect from committed support of it, runs through each human life, rather than marking distinct groups of people. Sometimes  I  am with those who prefer to get on with their own business, sometimes with those who joyfully respond, sometimes with those who respond without changing their ways. The story tells me that the choices I make are not trivial and may be permanent.

ROMANS 8
1. There is, therefore, now no condemnation for those who are in union with Christ Jesus; 2 for through your union with Christ Jesus, the Law of the life-giving Spirit has set you free from the Law of sin and death. 3 What Law could not do, in so far as our earthly nature weakened its action, God did, by sending his own Son, with a nature resembling our sinful nature, to atone for sin. He condemned sin in that earthly nature, 4 so that the requirements of the Law might be satisfied in us who live now in obedience, not to our earthly nature, but to the Spirit. 5 They who follow their earthly nature are earthly-minded, while they who follow the Spirit are spiritually minded. 6 To be earthly-minded means death, to be spiritually minded means life and peace; 7 because to be earthly-minded is to be an enemy to God, for such a mind does not submit to the Law of God, nor indeed can it do so. 8 They who are earthly cannot please God. 9 You, however, are not earthly but spiritual, since the Spirit of God lives within you. Unless a person has the Spirit of Christ, they do not belong to Christ; 10 but, if Christ is within you, then, though the body is dead as a consequence of sin, the spirit is life as a consequence of righteousness. 11 And, if the Spirit of him who raised Jesus from the dead lives within you, he who raised Christ Jesus from the dead will give life even to your mortal bodies, through his Spirit living within you.

This may be the most interpreted passage in the Bible, at least since Luther’s rediscovery of Paul’s doctrine of grace. This translation, the Open English Bible, makes a good stab at allowing Paul’s argument to flow. In the previous section of his letter Paul has shown how the power of sin, which has taken up residence within human nature, is stronger than God’s holy law, which it perverts into an encouragement to sin. “Do not commit adultery” just reminds the sinner that adultery is on the menu! Now Paul says that God has found out the remedy by sending Jesus Messiah in a human body to defeat the power of sin over that body. He condemned sin’s power over earthly human nature not only by his sinless life but also by his willing death in obedience to God’s Spirit. In his willing death he “killed” that earthly nature controlled by sin and (by his resurrection) opened up a new life for mortal bodies ruled by God’s Spirit. When the believer links her life to Christ’s, her “earthly nature” is put to death by following Christ’s way of the cross, while her mortal body is liberated by Christ’s life-giving Spirit, and she becomes able to obey God. When Paul says there is no condemnation for believers, that is not because God accepts them in Christ “as if” they were righteous, nor (God forbid!) that he has punished Christ in their place, but because he has found a way of turning them into holy people.

If we wanted to harmonise these two passages of scripture we could see the “wedding feast” as God’s gift of new life in the Spirit, and the wedding robe as being “spiritually minded” and “living in obedience.” The parable uses a vivid story-telling langauge to depict God’s battle with evil, whereas Paul uses psychological and spiritual langauge for the same purpose. We’re lucky to have both.

Tags: many called/ few chosen, no condemnation in Christ, Romans 8