THE BLACK FLAG FLIES OVER THE ISIS CALIPHATE

This is not God’s kingdom

12 So then, friends, we owe nothing to our earthly nature, that we should live in obedience to it. 13 If you live in obedience to your earthly nature, you will inevitably die; but if, by the power of the Spirit, you put an end to the evil habits of the body, you will live. 14 All who are guided by the Spirit of God are sons of God. 15 For you did not receive the spirit of a slave, to fill you once more with fear, but the spirit of a son which leads us to cry ‘Abba, Our Father.’ 16 The Spirit himself unites with our spirits in bearing witness to our being God’s children, 17 and if children, then heirs — heirs of God, and joint heirs with Christ, since we share Christ’s sufferings in order that we may also share his glory.

15 Then the Pharisees went away and conferred together as to how they might lay a trap for Jesus in the course of conversation. 16 They sent their disciples, with the Herodians, to say to him: “Teacher, we know that you are an honest person, and that you teach the way of God honestly, and are not afraid of anyone; for you pay no regard to a person’s position. 17 Tell us, then, what you think. Are we right in paying taxes to the Emperor, or not?” 18 Perceiving their malice, Jesus answered: “Why are you testing me, you hypocrites? 19 Show me the coin with which the tax is paid.” And, when they had brought him a coin, 20 he asked: “Whose head and title are these?” 21 “The Emperor’s,” they answered: at which he said to them: “Then pay to the Emperor what belongs to the Emperor, and to God what belongs to God.” 22 They wondered at his answer, and left him alone and went away. 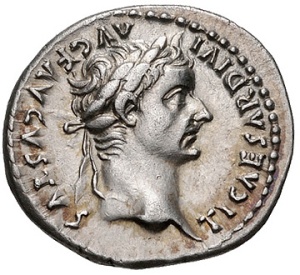 Matthew depicts Jesus is his role as prophet and teacher of wisdom. He attributes malice to the Pharisees but the kind of testing question asked here is typical of debates about God’s Law. It’s an obvious trap but a good one. Paying taxes to the Roman conqueror was not popular with the conquered people but advising people not to pay them was a a good way to shorten your life. Jesus’ answer shows wit and wisdom. First he exposes the hypocrisy of his questioners by showing that they use the foreign coinage with its (blasphemous) image of Tiberius Caesar on it. Then he tells them that the thing that has the emperor’s image on it doubtless belongs to the emperor and can be paid to him, but “what belongs to God” must be paid to God. But what belongs to God? Every Jew knew the answer: the things that bear his image, namely human beings. People belong to a greater emperor than Caesar because they are made in his likeness. They are never simply the property of some conqueror; although they may be conquered they do not lose the dignity of male and female made in the image of God. People may pay taxes to Caesar or not, using his boastful coinage, but they must give their lives to God.

This reply does not as some Reformers taught, divide life neatly into two realms: the state and the church, so that the government can rule one and the church, the other. Rather, it makes a fundamental statement about human worth and responsibility, which affects all dimensions of life. Any form of rule which does not respect human beings as the bearers of God’s image is blasphemy, whether it is the rule of insane tyrants as in North Korea or mad mullahs as in the new Caliphate of ISIS.

God’s kingdom as not “of this world”, that is, it does not rest on the same kind of authority as worldly kingdoms, nor does it manintain its authority by similar means. So it may be that God’s kingdom is compatible with Caesar’s taxes but that is something that can only be decided by people who know that their lives belong to God. In effect the early Christian belivers normally paid their taxes but refused to burn incense to the Emperor as a God. They said they would pray FOR the emperor but not TO him. Robert Burns once said, “There are no words which give greater dignity to humanity than these, ‘Let us worship God.” He meant that those who heard these words would worship nothing in the world.

The passage from Romans speaks of our earthly nature, literally in Greek, our flesh, our bioloogical being which can so easily be turned in upon itself, in fear, selfishness or arrogance. Those who open up their biological beings to the Spirit of God discover their true dignity: they are children of God. God, unlike worldly rulers has no slaves. God has children and desires they should know him as Abba, a dear father. Human beings are members of the royal family of God and will share the inheritance of Jesus Messiah, God’s unique son. No smaller dignity is appropriate for human beings. There is however a condition: only those who are ready to share the sufferings of Jesus will share his glory. Those who are to be raised to the heights must also be willing to the stoop to the depths for the sake of others.

Although the Pauline passage is less “political” than the Matthew passage, both ascribe immense worth to human beigs under God, and this has clear implications for all political systems.

Tags: give unto Caesar, human dignity, the politics of Jesus