When Jesus had finished teaching all of that, he said to his disciples: 2 “You know that in two days time the Festival of the Passover will be here; and that the Son of Man is to be given up to be crucified.” 3 Then the chief priests and the elders of the people met in the house of the high priest, who was called Caiaphas, 4 and plotted together to arrest Jesus by stealth and put him to death; 5 but they said: “Not during the Festival, or the people may riot.”

6 After Jesus had reached Bethany, and while he was in the house of Simon the leper, 7 a woman came up to him with an alabaster jar of very costly perfume, and poured the perfume on his head as he sat at the table. 8 The disciples were indignant at seeing this. “What is this waste for?” they exclaimed. 9 “It could have been sold for a large sum, and the money given to poor people.”

10 “Why are you troubling the woman?” Jesus said, when he noticed it. “For this is a beautiful deed that she has done to me. 11 You always have the poor with you, but you will not always have me. 12 In pouring this perfume on my body, she has done it for my burying. 13 I tell you, wherever, in the whole world, this good news is proclaimed, what this woman has done will be told in memory of her.”

14 It was then that one of the Twelve, named Judas Iscariot, made his way to the chief priests, 15 and said “What are you willing to give me, if I betray Jesus to you?” The Priests ‘weighed him out thirty pieces of silver’ as payment. 16 So from that time Judas looked for an opportunity to betray Jesus. 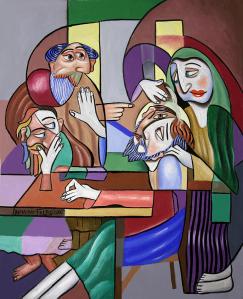 In a passage that is focused on Jesus’ betrayal and death, Matthew was probably aware of the resonance of the phrase, “in memory of her”, which parallels the phrase used by the church in the Lord’s Supper, “in memory of me (Jesus).” Any incident in which Jesus was anointed was of special interest to the Gospel writers, for whom Jesus was the Maschiach, the Christ, the anointed one of God. The woman’s action first of all declares her faith in him as Messiah. But as such it is almost a parody of God’s anointing of his special agent. Here the anointer is a woman, no special woman either, but a stranger, perhaps associated with Simon the Leper. What was the Messiah thinking of, keeping such company? The story indicates the meaning of “messiah” when applied to Jesus. He is the king of small people, the healer of the sick, the friend of outcasts, the compassionate one. He is indeed on his way to becoming quite literally small, outcast and in need of healing.

Jesus’ defense of the woman links his story inextricably with hers: she becomes part of the good news. Her understanding love for Jesus is not an alternative to love of the poor. She, a poor woman, has the dignity of making a gift to her Lord; and all his disciples already know their duty to the poor. She is part of the gospel forever, showing what a true response to Jesus should be; a costly outpouring of affection. That would be a good definition for Christian worship in all times. You could say she was leading the disciples in worship of Jesus, so how can some churches still refuse to acknowledge the ministry of women?

Those who do not love this downwardly- mobile messiah hasve their model in Judas who betrayed him. Honour to Judas also! For he does not simply desert nor does he try to twist the gospel of Jesus to his own preference; he knows Jesus well, he has had a long look at what he is doing, and he gives it the dignity of betrayal. He thinks it’s dangerous and must be destroyed.

I entreat you, then, friends, by the mercies of God, to offer your bodies as a living and holy sacrifice, acceptable to God, for this is your rational worship. 2 Do not conform to the fashion of this world; but be transformed by the complete change that has come over your minds, so that you may discern what God’s will is — all that is good, acceptable, and perfect.

3 In fulfillment of the charge with which I have been entrusted, I tell every one of you not to think more highly of himself than he ought to think, but to think until he learns to think soberly — in accordance with the measure of faith that God has allotted to each. 4 For, just as in the human body there is a union of many parts, and each part has its own function, 5 so we, by our union in Christ, many though we are, form but one body, and individually we are related one to another as its parts. 6 Since our gifts differ in accordance with the particular charge entrusted to us, if our gift is to preach, let our preaching correspond to our faith; 7 if it is to minister to others, let us devote ourselves to our ministry; the teacher to their teaching, 8 the counselor to their counsel. Let the person who gives in charity do so with a generous heart; let the person who is in authority exercise due diligence; let the person who shows kindness do so in a cheerful spirit.

Paul believes that the physical body of Christ which the woman anointed ahead of his death has been resurrected and glorified by God, so that now it is no longer an exemplary life to be followed, but rather a shared life in which all can participate. The ministry of Jesus Messiah continues in his shared body, the assembly of believers, where all his followers will find that their individual gifts can be valued and used.

Paul notes a range of gifts and ministries because he wants to show them as of equal value. Christian churches that determine the ministries first and look for people with approprate gifts afterwards, are doing things the wrong way round. They should take note of the gifts people bring as part of the body of Christ, and then decide on the ministries. Paul does not want to create institutions with a common constutution but communities with a common life inspired by Jesus.

Tags: Body of Christ, in memory of her, Jesus anointed at Bethany