26 While they were eating, Jesus took some bread, and, after saying the blessing, broke it and, as he gave it to his disciples, said: “Take it and eat it; this is my body.” 27 Then he took a cup, and, after saying the thanksgiving, gave it to them, with the words: “Drink from it, all of you; 28 for this is my covenant blood, which is poured out for many for the forgiveness of sins. 29 I tell you that I will never, after this, drink of this juice of the grape, until that day when I will drink it new with you in the kingdom of my Father.”

30 They then sang a hymn, and went out to the Mount of Olives. 31 Then Jesus said to them: “Even you will all fall away from me tonight. Scripture says — ‘I will strike down the shepherd, and the sheep of the flock will be scattered.’ 32 But, after I have risen, I will go before you into Galilee.” 33 “If everyone else falls away from you,” Peter answered, “I will never fall away!”

34 “I tell you,” replied Jesus, “that this very night, before the cock crows, you will disown me three times!” 35 “Even if I must die with you,” Peter exclaimed, “I will never disown you!” All the disciples spoke in the same way. 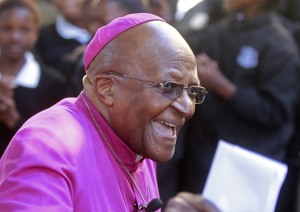 Tutu: “my humanity is bound up in yours for we can only be human together”

There are all manner of subtle connections between this supper and the passover meal. The passover bread, matzoh, is unleavened bread because prepared in haste as the Isrealites departed from Egypt “out of the house of slavery”.  The bread Jesus gave his disciples had for them the same significance; they were being led to freedom by Jesus. But there is also an irony here, for the angel of death “passed over” the Israelites whereas Jesus goes to his death. The covenant between Go and Israel was marked by the sacrifice of anmimals whereas the covenant to which Jesus refers is sealed by his own blood. Jesus’ actions and words at this “last supper” were amonsgt the most precious memories of him and already by Mattew’s time had been preserved in various forms and overlaid with various interpretations. More meanings continued to be added to the story over the early centuries of the church’s existence. The richness of the church’s reflection ought not to be despised, but there is a danger of losing sight of the story itself in a welter of symbolism.

A man sums up the purpose of his living and dying as being food and drink for his followers. In this moment he dedicates himself to that purpose: he will refuse wine until he drinks it again with his followers at the victory banquet of God’s rule on earth (That’s why he refuses wine on the cross).  This is a profound decalaration of generosity. True life is this sharing in which we become food and drink for each other. In the terminology pioneered by the Buddhist teacher, Thich Nhat Hanh, Jesus is the prophet of “interbeing”. We do not end at our skins or at the fragile shells of our egos, but truly share the lives of other creatures and of God.

But we should not think of this interbeing as a state naturally available to us. The disciples respond to Jesus by promising to share his life as he has shared with them, but Jesus warns them that they are not yet able for that. They will fail him. Only he will completely give his life, not just for them, but for many (meaning all humanity), then “go before them”  to the place where they will meet him again and be enabled to share their lives more fully.

When in Holy Communion believers say that Jesus commanded them to “do this” in remembrance of him, they do not simply refer to a symbolic action but to dedicating themsleves as Jesus did, to this urestricted generosity of life.