These readings are from the Catholic Lectionary for Daily Mass. The headline is chosen to remind me of the world in which I’m blogging. 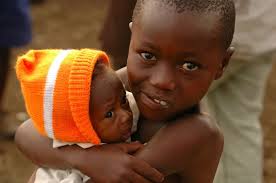 love does not come to an end

Be ambitious for the higher gifts. And I am going to show you a way that is better than any of them.
If I have all the eloquence of men or of angels, but speak without love, I am simply a gong booming or a cymbal clashing. If I have the gift of prophecy, understanding all the mysteries there are, and knowing everything, and if I have faith in all its fullness, to move mountains, but without love, then I am nothing at all. If I give away all that I possess, piece by piece, and if I even let them take my body to burn it, but am without love, it will do me no good whatever.
Love is always patient and kind; it is never jealous; love is never boastful or conceited; it is never rude or selfish; it does not take offence, and is not resentful. Love takes no pleasure in other people’s sins but delights in the truth; it is always ready to excuse, to trust, to hope, and to endure whatever comes.
Love does not come to an end. But if there are gifts of prophecy, the time will come when they must fail; or the gift of languages, it will not continue for ever; and knowledge – for this, too, the time will come when it must fail. For our knowledge is imperfect and our prophesying is imperfect; but once perfection comes, all imperfect things will disappear. When I was a child, I used to talk like a child, and think like a child, and argue like a child, but now I am a man, all childish ways are put behind me. Now we are seeing a dim reflection in a mirror; but then we shall be seeing face to face. The knowledge that I have now is imperfect; but then I shall know as fully as I am known.
In short, there are three things that last: faith, hope and love; and the greatest of these is love.

Jesus said to the people: ‘What description can I find for the men of this generation? What are they like? They are like children shouting to one another while they sit in the market-place:

‘For John the Baptist comes, not eating bread, not drinking wine, and you say, “He is possessed.” The Son of Man comes, eating and drinking, and you say, “Look, a glutton and a drunkard, a friend of tax collectors and sinners.” Yet Wisdom has been proved right by all her children.’ 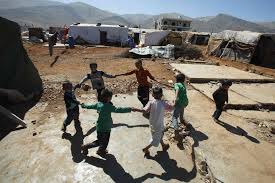 Refugee childfren in Lebanon. Love does not come to an end

Jesus was singling out the human ability to deflect awkward truths by concentrating on trivilaities. To evade the prophetic challenge of John the Baptist they picked on his austere habits and made him out to be a nutter; and they rejected Jesus’ call to receive the good news of God’s inclusive kingdom by slandering him as a good-time Charlie. By implication Jesus characterises these critics as fools who won’t receive God’s wisdom. To be a “fool” according to the wisdom tradition of Israel is to allow your hard heart to close your mind to the truth. It’s a serious condition.

We often see this condition during political debate. In the case of the Scottish Independence Referendum tomorrow, there have been good arguments by both sides, but also plenty evidence on both sides of people whose minds are closed because their hearts are not open to their opponents. I will vote “Yes” principally because an independent Scotland wil banish nuclear weapons from this land, but I will do so with some reserve, recognising the strength of the case for remaining part of the U.K. Whoever wins, only fools will use the result to lord it over their opponents.

Paul in his letter to Corinth was battling against a different sort of folly: the appeal of “religious ” achievement as a a means of self-glorification. Already in this letter he has said that “religious knowldege puffs up but love builds up.” A group of believers in Corinth had turned faith into a kind of esoteric knowldge which only clever people could understand, while looking down on ordinary believers. I think we can be justified in attributing Paul’s devastating critique of this tendency to his own history. He described himself as a perfectly righteous pharisee distinguished by the zeal with which he persecuted the followers of Jesus. He knew in himself the arrogance which can turn faith into zealotry. 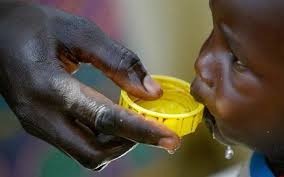 Water Aid: love does not come to an end

Here he stops criticising and presents a matchless portrait of the most important gift of God’s presence in human lives: the love of neighbour commanded in the Jewish scripture and demonstrated in the life of Jesus Messiah. All the other gifts-eloquence, prophecy, faith, even self-sacrifice, become empty displays without the presence of love. Paul’s characterisation of love is as splendid for its exclusions as for its inclusions: out are jealousy, boastfulness, conceit, rudeness, selfsihness, readiness to take offence, resentment, pleasure in other people’s sins; in are patience, kindness, delight in truth, readiness to excuse, trust, hope and endurance. Love takes first place because for Paul it belongs to grown-up faith. In another letter he says that the Jewish religious law has been in charge of people as long as their faith was immature, like a child-minder; whereas the Gospel of Jesus offers adult faith. Here he suggests that over-attention to “religious” gifts is essentially childish. People who grow up into Messiah Jesus, believing that God knows them intimately and allows himself to be known by them, also know that love is the greatest of all gifts. Paul confesses that the possession of this gift is as yet imperfect but it will be perfected “then”, that is, in God’s kingdom.

No amount of commentary can do justice to this passage. If it were used as a fundamental statement by which all other creeds were to be interpreted and all religious behaviour judged, it would prevent much folly and hardness of heart.

Tags: Adult faith, better than creeds, love does not come to an end