The readings are taken form the Catholic Lectionary for daily Mass and the headline is chiosen toremind me of the world in which I live.

SCOTS VOTE FOR OR AGAINST INDEPENDENCE TODAY 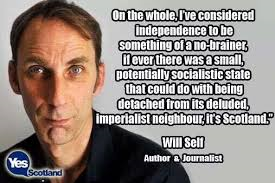 Brothers, I want to remind you of the gospel I preached to you, the gospel that you received and in which you are firmly established; because the gospel will save you only if you keep believing exactly what I preached to you – believing anything else will not lead to anything.
Well then, in the first place, I taught you what I had been taught myself, namely that Christ died for our sins, in accordance with the scriptures; that he was buried; and that he was raised to life on the third day, in accordance with the scriptures; that he appeared first to Cephas and secondly to the Twelve. Next he appeared to more than five hundred of the brothers at the same time, most of whom are still alive, though some have died; then he appeared to James, and then to all the apostles; and last of all he appeared to me too; it was as though I was born when no one expected it.
I am the least of the apostles; in fact, since I persecuted the Church of God, I hardly deserve the name apostle; but by God’s grace that is what I am, and the grace that he gave me has not been fruitless. On the contrary, I, or rather the grace of God that is with me, have worked harder than any of the others; but what matters is that I preach what they preach, and this is what you all believed.

There are at least two dramas lurking under the surface of this passage.

One is the handing on of the “memory of Jesus” which is at the heart of the Christian message. This has happened from the very start and is specifically linked to the “appearances” of Jesus after his death. These according to Paul were only to believers, to Cephas (Peter) the twelve (no mention of them as only eleven), and 500 brothers (sisters also?), who are cited as witnesses who can still give testimony. What was an appearance? Paul tells his readers elsewhere of his own experience in the simple words, “It pleased God to reveal his son in me.” As he describes himself as a persecutor of the church, we might feel that this revelation was part of his conversion (as in the book of The Acts), but Paul doesn’t say so. It’s a pretty sober account, Paul merely adding his own name on to the list of accredited witnesses. It is from the perspective of the appearances of the risen Jesus that the tradition depicts Jesus’ death as “in accordance with the scriptures, that is, Isaiah Chapter 53, which tells of God’s servant who suffers so that others may be healed. The process of passing on the “good news” of Jesus’ death and resurrection, from person to person, across time and space is the primary function of the Christian Church.

The other drama is Paul’s own history. His change from persecutor to apostle was extreme and must have been influenced by the behaviour of the Jesus people he hunted down. His appreciation of the character of Jesus must have beeen moulded by their characters. He attributed the change to a revelation of God but the revelation was made through human lives and perhaps human deaths. This wholesale change of life is a powerful witness to the dangerous aliveness of the crucified Jesus.

So Paul’s evidence for the life and death of Jesus is twofold: it is traditional in that it notes witnesses and the terms of their witness; but it is also personal in that it bears witness to a transformation of personal faith and life.

One of the Pharisees invited Jesus to a meal. When he arrived at the Pharisee’s house and took his place at table, a woman came in, who had a bad name in the town. She had heard he was dining with the Pharisee and had brought with her an alabaster jar of ointment. She waited behind him at his feet, weeping, and her tears fell on his feet, and she wiped them away with her hair; then she covered his feet with kisses and anointed them with the ointment.
When the Pharisee who had invited him saw this, he said to himself, ‘If this man were a prophet, he would know who this woman is that is touching him and what a bad name she has.’ Then Jesus took him up and said, ‘Simon, I have something to say to you.’ ‘Speak, Master’ was the reply. ‘There was once a creditor who had two men in his debt; one owed him five hundred denarii, the other fifty. They were unable to pay, so he pardoned them both. Which of them will love him more?’ ‘The one who was pardoned more, I suppose’ answered Simon. Jesus said, ‘You are right.’
Then he turned to the woman. ‘Simon,’ he said ‘you see this woman? I came into your house, and you poured no water over my feet, but she has poured out her tears over my feet and wiped them away with her hair. You gave me no kiss, but she has been covering my feet with kisses ever since I came in. You did not anoint my head with oil, but she has anointed my feet with ointment. For this reason I tell you that her sins, her many sins, must have been forgiven her, or she would not have shown such great love. It is the man who is forgiven little who shows little love.’ Then he said to her, ‘Your sins are forgiven.’ Those who were with him at table began to say to themselves, ‘Who is this man, that he even forgives sins?’ But he said to the woman, ‘Your faith has saved you; go in peace.’ 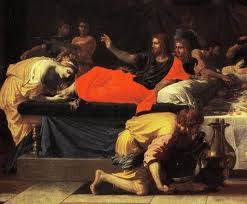 Poussin, The woman at Jesus’ feet

Doubtless the woman had heard of Jesus and his message, else why bother to break 23 social and religious taboos to seek his company. All that she does constitutes a terrible abuse of the Jewish hospitality code. Yet it is precisely these breaches of etiquette that Jesus turns to praise. His words simulataneously deride the pharisee and raise up the woman. Step by step Jesus restores her dignity. This is “justification”, being declared to be “in the right”.  The story Jesus tells interprets her behaviour as grateful love responding to forgiveness; and the pharsiees’ coolness as the ingratitude of one who thinks he needs no forgiveness. Jesus’ words confirm that the woman’s trust has brought her salvation, that is, she is rescued and given a victory.

This is the sort of story that may persuade people to trust Jesus.