The readings are from the Catholic lectionary fior daily mass, while the headline is chosen to remind me of the world in which I blog. 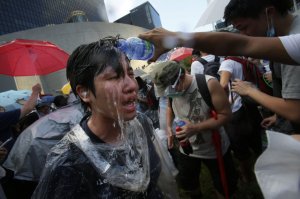 The holy ones of Hong Kong

Thrones were set in place
and one of great age took his seat.
His robe was white as snow,
the hair of his head as pure as wool.
His throne was a blaze of flames,
its wheels were a burning fire.
A stream of fire poured out,
issuing from his presence.
A thousand thousand waited on him,
ten thousand times ten thousand stood before him.
A court was held
and the books were opened.

And I saw, coming on the clouds of heaven,
one like a son of man.
He came to the one of great age
and was led into his presence.
On him was conferred sovereignty,
glory and kingship,
and men of all peoples, nations and languages became his servants.
His sovereignty is an eternal sovereignty
which shall never pass away,
nor will his empire ever be destroyed.

This passage is preceded by a vison of four savage beasts which symbolise the successive empires which have ruled the author’s world, culminating in the Greek empire ruled by the successors of Alexander the Great. The rule of God however is symbolised in this passage by a son of man, a mortal person, who represents God’s humane kingdom. Elsewhere in this chapter, this figure is interpreted as “the holy ones of the Most High” suggesting that the “son of man” is not a single ruler but a community guided by God. 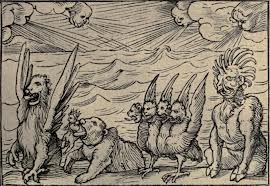 One of the interesting aspects of this vision is that destructive power is symbolised by animals and constructive power by humans. In a time when we know that humanity is far more destructive than any animal we may find this imagery less convincing than its first readers did.

But the message of the vison is clear: great savage empires may rule the earth, but there is a supeme court beyond the world, which has the power to grant ultimate authority over the world. There the One of Great Age, the Most High, scrutinises the records of worldly power and confers authority on a representative mortal to establish his eternal kingdom. The author may have identified this son of man with Israel or with its Messiah but he certainly intended his vision to offer a transcendent hope to those who were in the grip of brutal tyrannies.

We have to ask however, if this sort of vision still gives hope to those caught in the miserable warring nations of today’s Middle East, where it’s only too clear that religious visions can be used to justify the all manner of brutality.

When Jesus saw Nathanael coming he said of him, ‘There is an Israelite who deserves the name, incapable of deceit.’ ‘How do you know me?’ said Nathanael ‘Before Philip came to call you,’ said Jesus ‘I saw you under the fig tree.’ Nathanael answered, ‘Rabbi, you are the Son of God, you are the King of Israel.’ Jesus replied, ‘You believe that just because I said: I saw you under the fig tree. so You will see greater things than that.’ And then he added ‘I tell you most solemnly, you will see heaven laid open and, above the Son of Man, the angels of God ascending and descending.’

“One ever hangs where shelled roads part”
(Wilfrid Owen)

Here Jesus identifies himself wth the promised “Son of Man”. He tells Nathaniel that he comes to demonstrate that heaven is open, meaning that God is open to his creatures, and that the connection of heaven and earth experienced by Jacob at the place he called Bethel, (House of God) would be evident in his ministry.

It seems probable that Jesus did use the title, Son of Man, for his own ministry; and it’s certain that the gospel writers did so.This leads to the extraordinary claim that the rule of The One of Great Age, the eternal God, is exercised on earth through a crucified Galilean carpenter. Through his suffering servant Jesus, and those who share his suffering, God rules.

This is obviously a fundamental re-interpretation of the transcendent hope of God’s kingdom. The hope is not lost, indeed it is even now being realised, through what the world regards as ignominious defeat. Jesus is the model for those who will conquer by sober utterance of unpopular truth, by love of the disregarded and the oppressed, and by readiness for sacrifice. For those with eyes to see, heaven will be open and the angels will minister to God’s holy ones, but for those in thrall to inhuman powers it will look like business as usual.

The imagery of the Son Of Man in the scripture can enlighten and enable the holy ones of God in their worldly struggles.

In my own less than holy service I’m always encouraged by the last couplet of Isaac Watts splendid hymn “Join all the glorious names”:

A feeble saint shall win the day

though death and hell obstruct the way

Tags: The feeble saints, the peaceable kingdom, The Son of Man