The readings are from the Catholic lectionary for daily mass, while the headlines are chosen to keep my thinking real: 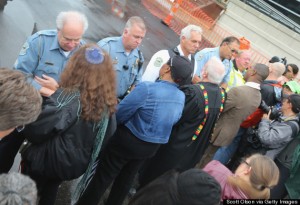 This is what I have to say — Let your steps be guided by the Spirit, and then you will never gratify the cravings of your flesh. 17 For these cravings of our flesh conflict with the Spirit, and the Spirit with our flesh — they are two contrary principles — so that you cannot do what you wish. 18 But, if you follow the guidance of the Spirit, you are not subject to Law. 19 The works of our flesh are unmistakable. They are sins like these — sexual immorality, impurity, indecency, 20 idolatry, sorcery, quarrels, strife, jealousy, outbursts of passion, rivalries, dissensions, divisions, 21 feelings of envy, drunkenness, revelry, and the like. And I warn you, as I warned you before, that those who indulge in such things will have no place in the kingdom of God. 22 But the fruit produced by the Spirit is love, joy, peace, forbearance, kindliness, generosity, trustfulness, gentleness, self-control. 23 Against such things there is no law! 24 And those who belong to Jesus, the Christ, have already crucified their flesh, with its passions and its cravings.

Kate Moss by L. Freud. Paul is not condemning the human body, but rather inhuman appetites

I’ve used a translation which keeps Paul’s word “flesh” (sarx in Greek) wheras all modern translations intepret it in phrases like “earthly nature”, “self-indulgence”  and so on. It’s true that Paul’s term does not mean the human body- Paul respects the body and even promises us new, splendid bodies in heaven. “Flesh” on the other hand is the biological life we share with all creatures. For them, that life is natural and right. But for human beings, equipped with with body, soul ,mind and spirit, it is the choice to live solely by appetite which dominates all aspects of a person’s nature, issuing in bodily sins like sexual indulgence and spiritual sins like envy. This biological life turned in upon itself and closed to God, is what Paul means by “flesh”: it leads to death. When Paul talks about the “works” of the flesh, he means attitudes and actions “enforced” by appetite; those who do them may say that they are liberated but in fact they are in thrall to unnatural desire. The modern idea of addiction is close to Paul’s idea of “works”.

On the other hand, “Spirit” for Paul means the whole person open to God’s goodness, so that all aspects of her life-body, souls, mind and spirit- can grow and flourish. The Spirit does not force or dominate, but rather enables growth, so that its actions and attitudes can be called, “fruits” rather than works. This is in line with Jesus’ teaching that a good tree bears good fruit. The nine fruits of the Spirit listed by Paul are lovely products of the whole person.

This is not achieved without violence, however. Those who belong to the crucified Messiah have crucified their flesh, according to Paul. This can be interpreted as a fundamental decision to be open and vulnerable, as Jesus was, rather than closed and dominating. Our flesh, our inturned appetites, will fight against this decision, but they must be subdued and surrendered to death. When it comes to “addiction” there can be no compromise. Again this is in line with Jesus’ teaching: “if your right eye leads you astray, pluck it out! Better to enter the kingdom half-blind than to burn in the fires of hell.”

The psychological understanding of Jesus and Paul is in conflct with much modern thinking. Its brutality towards destructive appetites may seem gross to modern psychotherapists. But it has a depth and a realism missing in much modern thinking, not to mention a more resolute commitment to human growth.

The Lord said to the Pharisees:
‘Alas for you Pharisees! You who pay your tithe of mint and rue and all sorts of garden herbs and overlook justice and the love of God! These you should have practised, without leaving the others undone. Alas for you Pharisees who like taking the seats of honour in the synagogues and being greeted obsequiously in the market squares! Alas for you, because you are like the unmarked tombs that men walk on without knowing it!
A lawyer then spoke up. ‘Master,’ he said ‘when you speak like this you insult us too.’
‘Alas for you lawyers also,’ he replied ‘because you load on men burdens that are unendurable, burdens that you yourselves do not move a finger to lift.’

Jesus and Pharisees
A Van Dyke

Jesus was denouncing a kind of religion which had become in Paul’s term,”of the flesh”. What had originally been a delight in the law of God had become a fierce appetite directed towards self-advancement and the domination of others. God’s justice and love were neglected in favour of a multitude of religious duties that were easy to fulfil if you were a well-to-do pharisee but an unendurable burden for ordinary men and women.

Jesus offers a shrewd portrait of religious self-righteousness in all times and places.