The readings are from the Catholoic lectionary for daily mass while the headlines are chosen to keep my thinking real:

This is a radical translation. The orginal Greek sounds very different, consisting mainly of one long sentence, with many subordinate clauses and attached phrases. So, no, Paul didn’t sound much like this translation. On the other hand the meaning of the words he used is brought out clearly here, by getting rid of traditional theological vocabulary which has gone dead. “Grace” for example is rendered as “kindness” which gets rid of the idea that it’s some kind of technical procedure which only God can perform.

In fact the original Greek is so unlike the letters which are certainly by Paul that many scholars have seen this letter as composed by a disciple of Paul writing “in his name”. I’m not competent to pronounce on this matter,but I’m inclined to think that the profound understanding eveident in this letter comes from Paul, even if someof the language and sentence structure may come from his scribe. I’ll call the author Paul.

The main drift of this passage is the describe in outline the eternal plan that God has revealed in Jesus. Paul wants to emphasise that the kindness he has shown in Messiah Jesus is not a new start or a Plan B for the world but is the clear revelation of what he had planned from the outset. In effect Paul is saying that the Messianic communitiy has been part of God’s creative purpose from all eternity, the reason why God “chose” the Jewish people, gave his beloved son to live and to be killed and rise again, and adopted all humanity as his dear children. By these means, Paul says, God will finally complete his creation, when heaven and earth shall be one. 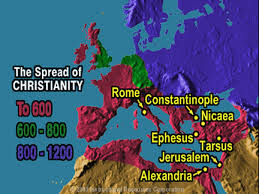 The fact that the Messianic communities of Paul are interracial, international and at peace across the dividing lines of the ancient world, rivalling the Roman Empire in scope, shows that Paul’s vision is political as well as theological. He is saying that one new humanity, united peacefully in Jesus Messiah, is an essential part of God’s purpose for the world. It is not the whole pupose – Paul looks forward to the day when, as he says in another letter, “creation itself will be set free from its slavery to decay and share the glorious freedom of God’s children.”

Jesus Messiah, for Paul,  is not the divinity of a new religion or empire but the end of all religions and empires, as human beings accept God’s invitation to be his/her children, holy, innocent and loving. In comparison with the sweep of Paul’s vision, the retreat of today’s Christianity into religion, sectarianism, salvationism and subjection to the powers of the world, is evident.

Jesus said:
‘Alas for you who build the tombs of the prophets, the men your ancestors killed! In this way you both witness what your ancestors did and approve it; they did the killing, you do the building.
‘And that is why the Wisdom of God said, “I will send them prophets and apostles; some they will slaughter and persecute, so that this generation will have to answer for every prophet’s blood that has been shed since the foundation of the world, from the blood of Abel to the blood of Zechariah, who was murdered between the altar and the sanctuary.” Yes, I tell you, this generation will have to answer for it all.
‘Alas for you lawyers who have taken away the key of knowledge! You have not gone in yourselves, and have prevented others going in who wanted to.’
When he left the house, the scribes and the Pharisees began a furious attack on him and tried to force answers from him on innumerable questions, setting traps to catch him out in something he might say.

Here Jesus attacks the religious sectarianism of the Jewish establishment. He looks at the history of his people as a struggle bewteen the prophets who have fought for God’s liberating truth and the establishment which has persecuted them. He sees himself as one of a series of witnesses who have met a bloody end.

The pious attention to the tombs of the prophets is travestied by Jesus as an confession of guilt, while the careful scholarship of the religious lawyers is depicted  as a way of preventing access to God’s truth. This is no way to make friends, we might say. Faced with Jesus’ anger all of us who preside at pious ceremonies and dispense authoritative biblical teachings – even in blogs! – should tremble.

I started out my ministry almost 50 years ago as a disciple of Dietrich Bonhoeffer, a German pastor executed by the Nazis He pioneered a “religionless Christianity” which would allow men and women to find God beside them in the “acessible neighbour” rather than in temples and cathedrals. I remain a follower.