5 This is the book of Adam’s generations. In the day that God created humankind, in the likeness of God he made it.

2 Male and female created he them; and blessed them, and called their name Humankind, in the day when they were created.

3 And Adam lived a hundred and thirty years, and begot a son in his likeness, after his image, and called his name Seth.

4 And the days of Adam after he had begotten Seth were eight hundred years; and he begot sons and daughters.

5 And all the days of Adam that he lived were nine hundred and thirty years; and he died.

6 And Seth lived a hundred and five years, and begot Enosh.

7 And Seth lived after he had begotten Enosh eight hundred and seven years, and begot sons and daughters.

8 And all the days of Seth were nine hundred and twelve years; and he died.

10 And Enosh lived after he had begotten Cainan eight hundred and fifteen years, and begot sons and daughters.

11 And all the days of Enosh were nine hundred and five years; and he died.

13 And Cainan lived after he had begotten Mahalaleel eight hundred and forty years, and begot sons and daughters.

14 And all the days of Cainan were nine hundred and ten years; and he died.

16 And Mahalaleel lived after he had begotten Jared eight hundred and thirty years, and begot sons and daughters.

17 And all the days of Mahalaleel were eight hundred and ninety-five years; and he died.

18 And Jared lived a hundred and sixty-two years, and begot Enoch.

19 And Jared lived after he had begotten Enoch eight hundred years, and begot sons and daughters.

20 And all the days of Jared were nine hundred and sixty-two years; and he died.

22 And Enoch walked with God after he had begotten Methushelah three hundred years, and begot sons and daughters.

23 And all the days of Enoch were three hundred and sixty-five years.

24 And Enoch walked with God; and he was not, for God took him.

25 And Methushelah lived a hundred and eighty-seven years, and begot Lemech.

26 And Methushelah lived after he had begotten Lemech seven hundred and eighty-two years, and begot sons and daughters.

27 And all the days of Methushelah were nine hundred and sixty-nine years; and he died.

28 And Lemech lived a hundred and eighty-two years, and begot a son.

29 And he called his name Noah, saying, This one shall comfort us concerning our work and concerning the toil of our hands, because of the ground which Jehovah has cursed.

30 And Lemech lived after he had begotten Noah five hundred and ninety-five years, and begot sons and daughters.

31 And all the days of Lemech were seven hundred and seventy-seven years; and he died.

This list of Adam & Eve’s descendants is interesting because it completely misses out Cain and his descendants who have already been noted by the author, as if he was saying that these, here, are Adam’s real descendants.  The effect of the whole list is to indicate the passage of time and to separate these human beings from later ones by their extraordinary longevity. They are both the ancestors of modern humans and very different: they belong to the era of origins. (The modern account of human origins, although much more scientific, has not yet given us a much fuller narrative, although it’s clear that the lives of our most distant ancestors were shorter rather than longer than ours.)

The list is carefully prefaced by a reminder of Genesis chapter 1, emphasising that humankind is made in God’s likeness and that Adam’s children are made in his likeness. Human fertility is likened to God’s creativity, giving it great dignity. This preface also tells the reader, therefore, that the likeness of God is carried down the generations of humankind, and is not lost through “original sin” as some theologians have speculated. These descendants of Adam & Eve, albeit struggling to win a livelihood from the soil, manage to obtain it; and their women, through cursed with pain in childbirth, produce children; so that life is renewed even as individual people die. God’s original blessing remains in force and his command to be fruitful is obeyed. It’s important to emphasise this, as the story of humanity will shortly take a decisive turn for the worse.Initially, the line of Adam & Eve -with the exception of Cain and his line – manages to express their likeness to God.

Enoch is picked out as being a man who “walked with God”, that is, who particularly expressed his likeness to God in his actions. That’s why his death is not simply noted by the word “died” as with the others, but with the phrase “God took him.” This also means he died (later Jewish and Christian speculation imagined him lifted bodily into heaven), but suggests that his life was completed in God’s care.

Finally after a huge lapse of time Noah is born, as one who will “bring comfort for our work and the toil of our hands.” Eventually the story notes that there is cause for hope, which comes through a person born in the ordinary succession of human lives. nevertheless, as readers who now the story will be aware, this hope only just survives a process of destruction and disaster. The emergence of new hope from the human line and the paradoxical way it wins through disaster, is familiar to all who follow the traditions of Judaism, Christianity and Islam.

3 And he entered again into the synagogue; and there was there a man with a dried up hand.

2 And they watched him if he would heal him on the sabbath, so that they might accuse him.

3 And he says to the man who had the dried up hand, Rise up and come out into the midst.

4 And he says to them, Is it lawful on the sabbath to do good or to do evil, to save life or to kill? But they were silent.

5 And looking round upon them with anger, distressed at the hardness of their hearts, he says to the man, Stretch out your hand. And he stretched it out, and his hand was restored.

6 And the Pharisees going out straightaway took counsel with the Herodians against him, how they might destroy him.

I have previously likened Jesus’ ministry, as described by Mark, to a repeated explosion of life. Mark depicts a series of small explosions as Jesus comes into contact with needy people damaged by the powers of evil and death. These powers are evident not just in the symptoms of physical and mental illness but also in their causes and consequences, especially as regards the communities who accept illness as God’s will. For Jesus, anything that diminishes life cannot be God’s will and must always be opposed. The Scottish theologian David Cairns wrote a book about the miracles of Jesus called, “The faith that rebels.”

In this instance, Mark shows that Jesus’ opponents were not interested in the man’s health so much as Jesus’ anticipated breaking of the Sabbath Law. Healing in response to an emergency was lawful, but not in the case of a long-term condition. Jesus immediately attacks the passive condition of the man, telling him to “Rise up” (the resurrection word) and to become the centre of attention. Jesus will not be complicit, even for 24 hours, in the man’s diminshed life. His question to his 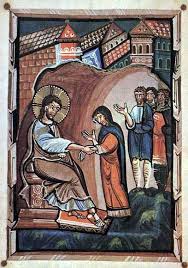 opponents is barbed. He only needs to ask, “Is it lawful to do good on the Sabbath”: that’s the devastating word that cuts through all the religious hoohah. Does God want to stop us doing good on the Sabbath? Rather than concentrating on what should not be done Jesus focuses relentlessly on the good that must be done. But of course he asks the question about evil because he shrewdly suspects that his opponents are out to harm him.

Their silence shows that both parts of his question have hit the mark. Mark describes Jesus as angry and distressed by their “hardness of heart”, a phrase that in the Jewish Bible goes back to Pharaoh, who in the face of repeated plagues on his people, refused to let his slaves go free for God had “hardened his heart.” It refers to the stubborn wrongness which persists even in the face of warnings and opportunities to change.

Jesus also needs the man to show his trust, so he commands him to stretch out his hand as a sign that he wants to be healed; as he does so, he is healed. Mark depicts the healing as instantaneous; he sees it as a miracle of God’s goodness working through Jesus. Like many readers, I find myself saying, “Of course it didn’t really happen like that”, but Mark’s no dafter than me; he knows that flesh doesn’t heal instantly; but he wants to tell me that this is “what really happened” in Jesus’ ministry. Mark wants to tell the powers of evil and death “Your boys took one hell of a beating.”

Marks little footnote tells us that the holy Pharisees then made common cause with the unholy politicians of King Herod, to destroy Jesus. Again he reminds his readers that Jesus’ resurrection power will bring about his death on the cross. In the Ballad of the Bread Man the poet Charles Causley says of Jesus, “he was charged with bringing the dead to life/ no man was that prisoner’s friend.”

Tags: and Adam begat...., Enoch in the first rapture?, Explosions of God's goodness