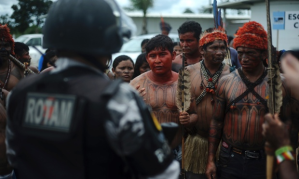 This blog gives a meditation on the Book of Genesis and the Gospel of Mark. Today I will quote from a radical translation of Genesis”The Five Books of Moses” by Everett Fox, (Schocken Books) which gives a vivid imitation of the Hebrew text. The letters YHWH are the consonants of God’s name in Hebrew.

9 These are the begettings of Noah.

Noah was a righteous, whole – hearted man in his generation;

in accord with God did Noah walk.

Now the earth had gone-to-ruin before od, the earth was filled with wrongdoing.

God saw the earth and here: it had gone-to-ruin,

for all flesh had ruined its way upon the earth.

God said to Noah:
And end of all flesh has come before me;

the earth is filled with their wrongdoing;

here, I am about to bring ruin upon them, along with the earth.

Make yourself an Ark of gofer wood,

with reeds make the Ark, and cover it within and without with a covering of pitch.

And this is how you are to make it:

A skylight you are to make for the Ark, finishing it to a cubit upward.

The entrance to the Ark you are to set in its side;

with a lower, a second, and a third deck you are to make it.

here, I am about to bring in the Deluge, water upon the earth,

to bring ruin on all flesh tha has rush of life in it, from under the heavens,

all that is on earth will perish.

I’ve kept God’s covenant with Noah for tomorrow, as I want to pay attention to the destructive side of God’s promise. Alexander Pope, the English poet coined the phrase, “uncreating word.” This passage gives us God’s uncreating word. It’s worth careful examination.

1. There is a degree of inevitability: “the end of all flesh has come before me”. It is God’s decision, but the extravagant evil of his human creatures has brought this decision “before God.” All flesh has “ruined its way” that is, denied its divine purpose, and so God will bring ruin upon them. The wrongness and its punishment are intimately linked.

2. God will do this by natural means, that is, by a deluge which will happen by God removing the barriers he has placed to confine the waters of chaos, above and below the earth. Chaos is always still present, in these waters and in the night which follows each day. The evil of human beings, which transgresses the limits placed by God is another form of chaos, which human beings tend to call progress; for all that is new, that is not part of what God has already determined, is drawn out of what is indeterminate, to find a place on earth. The wrongness of humankind in Genesis is intimately linked to its creativity which goes beyond safe limits and brings disaster. Of course the disaster happens by God’s decision but it proceeds inexorably from human action.

3. The earth and the heavens are not to be destroyed, only that special form of creation which has the “rush of life” in it. We are talking specifically about an ecological disaster. This is a clue to the modern relevance of the Noah story. The arrogant evil of humanity threatens to bring chaos which will overwhelm all forms of life.

Global warming:
God gave Noah the rainbow sign/ No more water but the fire next time.

4. We call it Noah’s Ark but as we see from the story it is really God’s Ark, planned in detail by God to enable all forms of life to survive the Deluge. It seems likely that the Genesis editors understood the link between this Ark and the Ark of the Covenant, the dwelling place of God’s commandments. God’s Ark in either form is designed to give life. In their different ways both Arks are symbols of the world as planned by God. Modern humankind is conscious of this earth as our spaceship Ark, carrying us round our sun, and with our sun through space. We must ask in what ways it can become an Ark of God, capable of carrying life through the kinds of chaos we have unleashed.

13 And he goes up into the mountain, and calls whom he would, and they went to him.

14 And he appointed twelve that they might be with him, and that he might send them to preach,

15 and to have power to heal diseases, and to cast out demons.

16 And he gave to Simon the surname of Peter;

17 and James the son of Zebedee, and John the brother of James, and he gave them the surname of Boanerges, that is, Sons of thunder;

18 and Andrew, and Philip, and Bartholomew, and Matthew, and Thomas, and James the son of Alphaeus, and Thaddaeus, and Simon the Zealot,

19 and Judas Iscariot, who also delivered him up.

In Matthew’s Gospel, Jesus goes up a mountain to teach. Here it is to name twelve of his followers to share his ministry of teaching and healing, and to represent the twelve tribes of the new Israel, the new people of God. Through his twelve disciples Jesus calls his whole people into God’s rescue. Given that the institution of the Twelve had virtually no place in the first churches, we can assume that it is not an invention of the church but a historical fact. The lists of the twelve names in the four gospels do not tally perfectly, however, and very little is known about most of them. We get reasonably frequent mentions of Peter, Andrew, James and John, some information about Thomas and Judas and practically nothing about the rest, unless Matthew is to be identified with Levi the Tax Collector.

Perhaps the surnames or by-names can tell us something. I tend to think of them as instances of Jesus’ humour and insight: Simon whose courage is a bit flaky is called, The Rock; James and John who are hot – headed are called “Thunder-boys”; Simon who may have been a fervent nationalist is called *Jihadi”. The by-names may express affection and trust as well as laughter. Jesus trusted Simon to become a rock in his community, James and John to represent the thunder of the Gospel, Simon to fight for God’s kingdom.

Scholars will mock this interpretation, but I think it’s just as likely as any I’ve read in their works. This is a nugget of early tradition which Mark is using in his story. These details may tell us something about Jesus’ relationship with his disciples, as does the information about Judas who is depicted as a traitor in all the gospels. His name may mean “dagger-man” (Latin, sicarius, dagger) or it may point to his birthplace, the town of Kerioth. Here Mark tells us that he “delivered Jesus up”, he “handed him over” to his enemies. The same word is used of Jesus delivering himself up, or being delivered up by God (Romans 8:32), for the rescue of humankind. There is a sense in which Judas the traitor is, ironically, doing God’s work.

As we will see, Mark’s picture of the Twelve is fairly critical. Did he think that Jesus had made mistakes in “calling whom he would” to his service or was he giving his Christian readers hope that they were no worse than the original apostles?