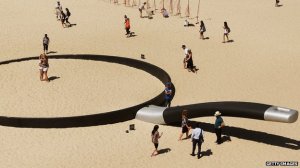 But I will establish my covenant with you,

and from all living things, from all flesh, you are to bring two from all into the Ark, to remain alive with you.

There are to be a male and a female each,

two from all are to come to you, to remain alive.

As for you, take for yourself from all edible things that er eaten, and gather it to you,

it shall be for you and for them, for eating.

according to all that God commanded him, so he did.

Come you and all your household into the Ark!

For you have I seen as righteous before me in this generation.

From all pure animals you are to take seven and seven each, a male and his mate;

and from all animals that are not pure, two each, a male and his mate,

and also from the birds of the heavens, seven and seven each, male and female

to keep seed alive on the face of al the earth.

For yet in seven days

and will blot out all existing things that  have made, from the face of the soil.

according to all that YHWH had commanded him.

There is a bit of evidence here that originally there was a story using the word God and another using the word YHWH the holy name of God. An editor has stitched them together but there is some repetition, as readers can see and some disagreement with regard to the numbers of creatures that are to be taken into the Ark. Did they all come in two by two, or were there some seven by seven?

Noah has been picked by God because he is a good man. In him God sees that he was not mistaken to see his original creation of humankind as good. Therefore he has to make sure that the good creation is rescued; he is made responsible for their survival, and he does exactly as he is commanded, showing his respect for God’s wisdom.

Yet the reader may wonder about that. God is not starting again with creation; he is merely getting rid of all evil human beings and a lot of perfectly innocent animals.Will it work? After all, as the reader can predict, at the end God will be left with what he started with: males and females of humankind and all other creatures. So it’s a repeat rather than a new movie. The reader can probably guess that this is unlikelyto be a winner. It seems an implausible strategy, yet maybe “God” will come up with something completely unexpected.

We should note in our own time that in the face of ecological disaster, God expects human beings to preserve the other creatures of the earth. It may have been unwise of God to have allowed humankind such freedom on the earth but the story insists on his faithfulness to his creation. After all, with human help, he will not let it go.

And they come to Jesus’ house.
20 And again a crowd comes together, so that they cannot even eat bread.
21 And his relatives having heard of it went out to lay hold on him, for they said, He is out of his mind.
22 And the scribes who had come down from Jerusalem said, He has Beelzebub, and, By the prince of the demons he casts out demons.
23 And having called them to him, he said to them in parables, How can Satan cast out Satan?
24 And if a kingdom has become divided against itself, that kingdom cannot subsist.
25 And if a house has become divided against itself, that house cannot subsist.
26 And if Satan rise up against himself, and is divided, he cannot subsist, but has an end.
27 But no one can, having entered into his house, plunder the goods of the strong man unless he first bind the strong man, and then he will plunder his house.
28 Amen, I say to you, that all sins shall be forgiven to the sons of men, and all the injurious speeches with which they may speak;
29 but whosoever shall speak injuriously against the Holy Spirit, to eternity has no forgiveness; but lies under the guilt of an everlasting sin;
30 —because they said, He has an unclean spirit.
31 And his brethren and his mother come, and standing without sent to him calling him.
32 And a crowd sat around him. And they said to him, Behold, thy mother and thy brethren seek thee without.
33 And he answered them, saying, Who is my mother or my brethren?
34 And looking around in a circuit at those that were sitting around him, he says, Behold my mother and my brethren:
35 for whoever shall do the will of God, is my brother, and sister, and mother.

Here Jesus sets out his family values, which seem radical even today and in the midst deals with the accusation that he is possessed by an evil spirit. These two subjects are linked by the theme of house and household, covered by the word oikos in Greek, which indicates ink of the most important themes in Scripture, the “house” of God. I’ve written on this at greater length at emmock.com oikos.

Again the author refers to Jesus’ house in Capernaum, which of course is a house of God. It initially comes under attack from a surprising source, his own family who think he is possessed by a destructive spirit and have come to take him home. This diagnosis is also made by the scribes who identify the evil spirit as Beelzebub, prince of demons, who grants Jesus the miraculous powers he’s demonstrated. Jesus laughs this accusation out of court. So he says, you think Satan is giving me power to throw out his own evil spirits? Everyone knows that divided kingdoms and regimes (houses) will break up, so if Satan’s household is divided, it must be in a bad state! Then he moves on to depict Satan’s household as a strong man’s house. Now, he says, you can’t take away the strong man;s belongings – such as the poor souls Satan has possessed- without tying him up first. This is Jesus’ vivid description of his own healings: he ties up the power of evil and lets its captive people go free. Of course, he does not do this in his own power, but through the goodness of God. So anyone who slanders what he is doing for people is slandering God’s spirit which dwells in him; Jesus himself is a house of God. Why is it an unforgiveable sin to slander God’s Spirit? Because it is by God’s spirit that men and women are forgiven. Those who deny it or abuse it are refusing forgiveness.

This is a closely argued passage but once the reader sees and follows the connecting picture of houses/households it becomes plain enough. Jesus s describing the battle between the household of God and the household of Satan. Oh I guess some readers will say, “Do we have to believe in Satan?” No indeed, but we are to see that Satan is created by the evil thoughts and actions of human beings. As a personification of the transpersonal power of evil in the world, Satan exists and gathers a household until in God’s name someone ties him up and frees his prisoners. In the story of Jesus the household of Satan is a dark place inhabited by a) vicious self-righteous religionists, b) rich violent exploiters, and c) a whole batch of unfortunate and excluded victims, the poor, the sick and the mad. When Jesus “ties up the strong man” by the tough compassion of his ministry many of groups b) and c) respond and walk free, while most of group a) haven’t noticed that they are prisoners.

But the passage ends with the issue which Mark signalled at the start: Jesus’ own household have come to take him back “home”. This puts them, for the moment, amongst those who are slandering God’s Spirit. Jesus’ response is dismayingly clear. His real family are those who do God’s will, those who are God’s household. They are his dear ones, not those who think he’s disgracing their family name. 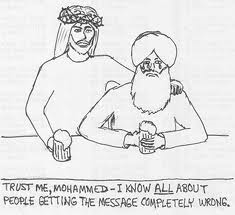 Jesus is not violent but he can be savage; this is a savage rejection of much that many people hold dear and in which they find safety. Jesus own jihad (his battle against evil) is not without its radicalism. Perhaps it’s time that the flag of Christian radicalism was raised again. It would have no place for any kind of violence or exclusivity; no place for self-righteousness or religious hierarchies, no wealthy corporations or commanding kalifates, no protection from heresy or laughter, none of these; only a savage, sane, joyful commitment to the goodness of God.