PLASTIC POLLUTION IN ALL PARTS OF ALL OCEANS

After the seven days it was

that the waters of the deluge were upon the earth.

In the six hundredth year of Noah’s life, in the second
new Moon, on the seventeenth day after the New Mon,

then burst all the well-springs of the great ocean

and the sluices of the heavens opened up.

The torrent was upon the earth for forty days and forty nights.

On that very day came Noah and Shem, Ham and Yefet,

and Noah’s wife and his sons’ three wives with them,

they came to Noah, into the Ark, two and two each, from all flesh in which there is the rush of life,

male and female from all flesh they came

as God had commanded him.

YHWH closed the door upon them.

The Deluge was forty days upon the earth.

The waters increased and lifted the Ark, so that it was raised above the earth.

The waters swelled and increased exceedingly upon the earth, and the ark floated upon the face of the waters.

Then died all flesh that crawls upon the earth, birds, herd animals, wildlife and all swarming things that swarm on the earth,

all that had the breath of the rush of life in their nostrils, all that were on firm ground,

He blotted out all existing things that were on the face of the soil,

from humans to beast, to crawling thing and to bird of the heavens, they were blotted out from the earth.

Noah alone remained and those who were with him in the Ark. 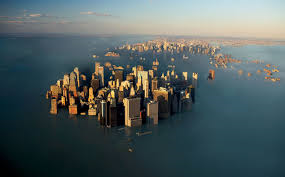 The author is using an ancient legend current in Mesopotamia about a great flood. In some instances the story involves the interactions and plots of humans and heavenly beings as in the entertaining epic of Gilgamesh, but the biblical version, while vivid, remains plain: God the creator is permitting most life to be blotted out because of the rampant evil of human beings. The chaotic waters above and below the earth, which God has restrained, are let loose but the Ark which God has designed to preserve all forms of life, succeeds in doing so.

In the theology of Genesis, there is no creation from nothing. The void with its chaotic waters co-exists with God at the beginning. The creator’s work is to build a balance between chaos and order; there is no sense in which chaos is abolished. Waters remain above the dome of the sky and below the dry land of the earth. The space of life is a fragile crust protected by the creator’s will. When his “will for life” is overcome by the rank evil of humanity he opens the door to the forces of chaos, while also closing the door of the ark behind its passengers. This tender, domestic detail of the God who shuts doors, is like that of the God who wipes away tears, in its gentle insistence on what we can only call the humanity of God.

The writer must have been aware of the similarity of this Ark to the Ark of the Covenant which contained God’s commandments: both are symbols of God’s will that life should flourish over against evil and the chaos it can unleash. Already, in our time, as a result of global warming many forms of life have suffered due to the raised level of the seas, and helpless human beings have experienced the power of surging waters. Noah is not a piece of antiquated legend but a parable for our times.

And again he began to teach by the sea. And a great crowd was gathered together to him, so that going on board ship he sat in the sea, and all the crowd were close to the sea on the land.

2 And he taught them many things in parables. And he said to them in his doctrine,

3 Hearken: Behold, the sower went forth to sow.

4 And it came to pass as he sowed, one fell by the wayside, and the birds came and devoured it.

5 And another fell on the rocky ground, where it had not much earth, and immediately it sprung up out [of the ground] because it had no depth of earth;

6 and when the sun arose it was burnt up, and because of its not having any root, it withered.

7 And another fell among the thorns, and the thorns grew up and choked it, and it yielded no fruit.

8 And another fell into the good ground, and yielded fruit, growing up and increasing; and bore, one thirty, and one sixty, and one a hundred.

9 And he said, He that has ears to hear, let him hear.

Jesus is talking about God’s kingdom, his new creation and appropriately he does so from a boat, symbol of God’s capacity to bring forth life from the midst of chaos. Jesus goes on the characterise the way in which God’s re-creation of his world wil be accomplished. It will no be like magic, nor like an act of force; but it will be like sowing seed. God trusts that his earth and its inhabitants will co-operate in his new creation. This may seem an undignified way for the creator to proceed because it means starting small. It will not happen everywhere in the blinking of a eye but will start somewhere on earth, perhaps even a place like Capernaum. You might have thought that God the Sower would be anxious about the results of this most ungodlike of methods, but no, Jesus depicts him as almost carefree, spreading the seeds of his kingdom with a lavish hand. The nature of the seeds goes undefined. We can think of them as aspects of Jesus’ ministry, his teaching and healing, or as the lives of human beings who believe in his new creation. In any case, they are scattered by the Sower over land which is only then, following Palestinian custom, ploughed.

Jesus’ story assumes there will lots of waste, given that there are lots of poor soils. But there will also be lots of success and fruitfulness for when their seeds land in decent soil they will grow and yield an ample harvest. God’s trust in humanity is no more misplaced than the confidence of any farmer who has decent arable land. 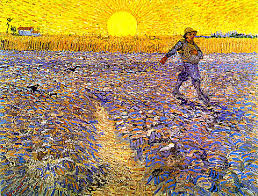 It is easy to become dismayed by the world’s evils and the sufferings of its inhabitants or to despair at the obscurity of efforts for justice and peace. Jesus’ parable tells us to lift up our eyes, “Behold! A sower goes forth to sow seed”; in the kingdom of God it is always seed-time. There will be a harvest, but at the moment, we are asked to part of the sowing.

This is Jesus explanation of why the kingdom of God begins in Galilee.

The parable is followed by its “explanation by Jesus. I think Mark knew that the explanation is really a different use of the same materials, concentrating on the nature of the soils. As the parable stands it notes the waste but concentrates on the confident sowing. Just as the farmer trusts the fertility of the soil, so God trusts the fruitfulness of human nature. When the church asks help with sowing the seeds of justice rather than selling a branded salvation product, it often gets unexpectedly high levels of support.

Tags: New York under water, The Flood, the parable of the Sower