Today’s blog contiunues my commentary on Genesis and Mark’s Gospel which I began on 1st January. Previous episodes can be found in my archives. 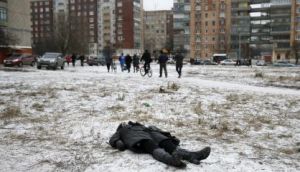 a woman lies dead as people pass by in Kramatorsk

The two messengers came to Sedom at sunset

as Lot was sitting in the gate at Sedom.

When Lot saw them he arose to meet them and bowed low, brow to the ground

pray turn aside to your servant’s house

spend the night; and wash your feet;

starting early you may go your way.

No, we would rather spend the night in the square.

But he pressed them exceedingly hard

so they turned in to him and came into his house.

He made them a meal with drink and baked flat-cakes, and they ate.

They had not yet lain down, when the men of the city, the men of Sedom, encircled the house,

from young lads to old men, all the people even from the outskirts.

They called out to to and said to him:

Where are the men who came to you tonight?

Bring them out to us, we want to rape them!

Lot went out to them, to the entrance, shutting the door behind him

Pay, brothers, do not be so wicked.

I have two daughters who have never known a man,

pray let me bring them out among you, and you may deal with them however seems good in your eyes;

only to these men do nothing

for they have after all come under the shadow of my roof-beam!

This one came here to sojourn and now he wants to play the judge!

Now we will do worse to you than to them!

And they pressed exceedingly hard against the man, against Lot,

and stepped closer to break down the door.

But the men put out their hand and brought Lot in to them, into the house and shut the door.

And the men who were at the entrance of the house they struck with dazzling light -all of them great and small,

so that they were unable to find the entrance.

The men said to Lot:

Whom else have you here – a son-in-law, sons, daughters?

Bring anyone whom you have in the city out of this place!

For we are about to bring ruin on the place

for how great is the outcry about them before YHWH!

And YHWH has sent us to bring it to ruin.

Maybe not Dad of the Year

The sly storyteller has to make the corruption of the Sedomites real to his audience; and he succeeds not just by his account of the attempted rape of male visitors, in violation of all taboos about treatment of guests and about sexual behaviour; but also by his characterisation of Lot.

Avraham’s nephew has already come under suspicion in the narrative for choosing what seems to be the best land for himself (the plain of Jordan) and leaving his uncle with the rougher land of to the west. Now, although he enjoys protection because he is one of the innocents for whom Avraham has argued before God, and because he has acted as a true host to his visitors, he is shown as weak in his offer of his daughters for rape in the place of his guests. Some scholars have argued that the offer just reflects the value system of the time – that the homosexual rape of strangers would be a “crime against God” whereas “ordinary rape” would just be a crime. There may be some truth in this interpretation, but even so Lot’s readiness to sacrifice his daughters to a lustful crowd of men is likely to have seemed disturbing to its original audience. Those readers who know what is still to come in the story will see in this incident a foretaste of the “readiness” of Lot’s daughters to sacrifice their father’s honour by having sex with him to propagate the human race after the destruction of Sedom; and also of Avraham’s very different “readiness” to sacrifice his son Yitzahk. As always in Genesis, the more the story advances, the more its narratives echo each other.

Rather than giving his audience a general catalogue of the evils of Sedom, the storyteller gives this one incident which shows how relentless brutality can spread insidiously from its perpetrators to its innocent victims. It’s an unsparing view of human evil.

And Jesus went forth with his disciples, into the villages of Caesarea-Philippi. And by the way he asked his disciples, saying to them, Who do men say that I am?

28 And they answered him, saying, John the Baptist; and others, Elias; but others, One of the prophets.

29 And he asked them, But you, who do you say that I am? And Peter answering says to him, You are the Messiah.

30 And he instructed them strictly, that they should tell no one about him.

31 And he began to teach them that the Son of man must suffer many things, and be rejected of the elders and of the chief priests and of the scribes, and be killed, and after three days rise again.

32 And he spoke the thing openly. And Peter, taking him aside, began to rebuke him.

34 And having called the crowd with his disciples, he said to them, Whoever desires to come after me, let them deny themselves, and take up their cross and follow me.

36 For what shall it profit a man if he gain the whole world and suffer the loss of his soul?

37 for what should a man give in exchange for his soul?

38 For whosoever shall be ashamed of me and of my words in this adulterous and sinful generation, of him shall the Son of man also be ashamed when he shall come in the glory of his Father with the holy angels. 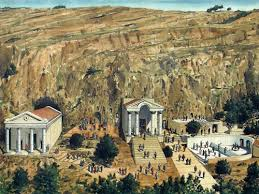 Reconstruction of Caesarea Philippi against its actual location

As I have noted in previous blogs, Mark has been encouraging his readers to focus on Jesus as the true king of Jews and Gentiles. He has shown the other leaders of the people, namely King Herod and the religious authorities as corrupt and untrue; and Jesus as committed to feeding people with his teaching and healing, that is, with God’s goodness. Already the readers will have picked up allusions to the “Supper of the Lord” in the repeated use of the verbs “take, bless, break and give” which point to the cost of Jesus’ Way.

Now in the passage above, Mark brings these themes together with greater clarity.

The place is significant: Caesarea Philippi reminds the reader of the Greek and Roman imperial rulers of Palestine; it is a place where kingship has been an issue. Jesus’ question probes the extent of popular understanding of his ministry – he is seen as a new John Baptist, a new Elijah, or a new prophet – and of his disciples’ understanding. Peter, on behalf of the others, says that he is the Messiah, the promised leader and restorer of Israel.

Jesus responds by ordering them not to speak of him publicly as Messiah; and he goes on to reveal his reasons. He will suffer official rejection from the religious authorities, he will be put on a cross to die, and after “three days” (an expression which means “finally”) rise again. Mark wants his readers to see clearly that Jesus anticipated his own failure and death on the cross. Nobody in the Roman world would have been tempted to think of the cross as a decoration or religious symbol. It was a feared punishment used by the Romans for foreigners, slaves and rebels.

Jesus’ prophecy of his own fate is historically likely. He could see where he was likely to end up. Some scholars have doubted that Jesus’ prescience would have included a cross, but given the fate of other “Messiahs” I think it would have been obtuse of Jesus not to see it as a probable outcome. The surprise is that rather than seeking to avoid this debacle, he actively embraces it. This what God’s goodness demands: that he will keep on revealing it, even in rejection, suffering and death. This constitutes his true self, his soul, which cannot be protected by worldly power but only by its faithfulness to God.

For Peter, all this is foreign to the meaning of “Messiah”: failure is not an option for Gods’ anointed.Jesus’ rebuke to Peter is savage, identifying him with The Satan, the enemy God’s goodness. He is told to get back in line behind the true king who will give himself to feed his people. He and the disciples and the crowd are invited, bizarrely, (think of the “getting your cross” scene in the “Life of Brian”) to carry crosses as a sign of allegiance to King Jesus, or even as the only weapons to be used in his cause.Those who close themselves to protect their lives, find death, while those who open themselves to suffering, find life. Mark knows that his readers will not understand the full meaning of this truth until they have read the second half of gospel which reveals that meaning step by step.

It seems clear to me that Mark, while recognising Jesus as the fulfilment of the messianic prophecies, regards “Messiah” as a  lesser title for Jesus than Son of God, and possibly as a test of His integrity.

The cross should not be made into a symbol of suffering in general; but rather of the suffering which comes to those who resist worldly powers in allegiance to Jesus.

Tags: Lot's offer of his daughters at Sodom; Jesus at Caesarea Philippi, Was Jesus the Jewish Messiah