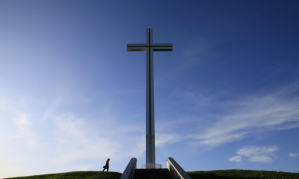 Now when the dawn came up

the messengers pushed Lot on, saying:

Up, take your wife and your  two daughters who are here

lest you be swept away in te iniquity of the city.

When he lingered the men seized his hand, his wife’s hand and the hands of his two daughters

– because YHWH’s pity was upon him –

and bringing him out, they left him outside th city.

It was when they brought him out one of them said:

Escape for your life, do not gaze behind you, do not stand still anywhere on the plain:

to the hill country escape, lest you be swept away!

Lot said to them:

Now pray, your servant has found favour in your eyes,

you have shown great faithfulness in how you have dealt with me, keeping me alive –

but I, I am not able to escape to the hill country,

even though the wickedness cling to me, and I die.

Now pray, that town is near enough to flee to and it is so tiny,

let me escape there – is it not tiny? – and stay alive.

He said to him:

Here then, I lift  up your face in this matter as well,

by not overturning this town of which you speak.

for I am not able to do anything  until you come there.

Therefore the name of the town was called Tzo’ar / Tiny.

Now the sun was going out over the earth as Lot came to Tzo’ar.

But YHWH rained down fire and brimstone upon Sedon and Amora, coming from YHWH, from the heavens.

He overturned those cities and all those settled in the cities and the vegetation of the soil.

Now his wife gazed behind him and she became a pillar of salt.

Thus it was, when God brought ruin on the cities of the plain,

when he overturned the cities where Lot had settled. 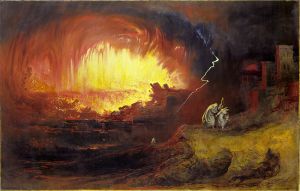 The number of the innocent has not even reached the magic ten, for whose sake God had promised to spare the cities, but in faithfulness to Avraham God saves the innocent family of Lot. Or maybe he’s not completely innocent as he’s so reluctant to leave the plains behind. The author may want to show that the sin does cling to him and that he only escapes by the skin of his teeth, to the little city which God agrees to not to destroy. In the theological geography of the book of Genesis, the hill country comes to stand for virtue and the plains for vice.

Even although Lot is a weak and vacillating man, God is ready to listen to him. God has not decided all things in advance, but leaves room for human beings to contribute to his plans, not only in allowing Lot his wish but also in “keeping Avraham in mind”, so that his plea for the innocent bears fruit. The destruction of the cities reminds the reader of God’s dilemma: that in the face of human corruption God’s only weapon has been his power to destroy what he has created. Now however his partnership with Avraham points to a better option, a way of bringing his blessing to the world.

Lot and his daughters are saved but the pillar of salt remains, as in no-man’s land, as a warning to those who are reluctant to leave evil behind.

9 And he said to them, Truly I say to you, There are some of those standing here that shall not taste death until they shall have seen the kingdom of God come in power.

2 And after six days Jesus takes with him Peter and James and John, and takes them up on a high mountain by themselves apart. And he was transfigured before them:

3 and his garments became shining, exceedingly white as snow, such as a fuller on earth could not whiten them.

4 And there appeared to them Elijah with Moses, and they were talking with Jesus.

5 And Peter in resposnse says to Jesus, Rabbi, it is good that we should be here; and let us make three tabernacles, for you one, and for Moses one, and for Elijah one.

6 For he knew not what he should say, for they were filled with fear.

8 And suddenly having looked around, they no longer saw any one, but Jesus alone with themselves.

9 And as they descended from the mountain, he instructed them that they should relate to no one what they had seen, unless when the Son of man should be risen from among the dead.

10 And they kept that saying, questioning among themselves, what rising from among the dead was.

11 And they asked him saying, Why do the scribes say that Elias must first have come?

12 And he answering said to them, Elijah indeed, having first come, restores all things; and how is it written of the Son of man that he must suffer much, and be utterly rejected:

13 but I say unto you that Elijah also is come, and they have done to him whatever they would, as it is written of him.

It’s not clear where Mark got this story bu it is clear that it is not meant to be factual: Mark knew as well as we do that human beings are not suddenly illuminated by supernatural light. How would the disciples have recognised Moses and Elijah? Did they have their names on their shirts?

Therefore we know that Mark has placed the story here at the hinge of his gospel to remind the reader that the one who has demonstrated God’s goodness in the lake villages of Galilee, and who is about to become, ever more clearly, the one rejected by his own people and thrown into suffering, is God’s son, his Beloved. If we are tempted to say that this One is beloved of God because he brings God’s goodness to the world, we should realise that for Mark it’s the other way round: he is able to bring God’s goodness because he is God’s Beloved. Jesus is about to begin his descent into darkness and the disciples of Jesus are reminded to keep listening to him, to identify with the Beloved in his sufferings so that they may share his victory.

The frightening power of worldly forces is noted by Jesus when he identifies the promised Elijah, forerunner of the Messiah, with the murdered John Baptist: “they have done with him whatever they would”. Jesus is warning his disciples that he and they will also be subject to these forces.

If we’re not disadvantaged by our faith in Jesus, it’s probably because we haven’t been clear enough in our opposition to the powers that rule our world. If we do however manage to oppose,we do so in union with Jesus  the Beloved, with whom we shall shine like the sun in the kingdom of heaven.

Tags: the Beloved, The destruction of Sodom & Gomorrah, The Transfiguration of Jesus