This blog is following the book of Genesis and the Gospel of Mark in tandem. The headline is meant as a reminder of the world.

HOPE FOR ARABS IN ISRAEL’S ELECTION

Now Avimelekh went to him from Gerar, along with Ahuzzat his aide and Pikhol the commander of his army.

Yitzhak said to them:

Why have you come to me?

For you hate me and have sent me away from you!

We have seen, yes seen that YHWH has been with you,

so we say: Pray let there be an oath-curse between us, between us and you,

we want to cut a covenant with you:

If ever you should deal badly with us….!

– you are now blessed by YHWH!

He made them a drinking feast and they ate and drank.

Early in the morning they swore an oath to one another;

then Yitzhak sent hem off and they went from him in  peace.

Now it was on tha same day

that Yitzhak’s servants came and told him about the well that they had been digging,

they said to him:

we have found water!

therefore the name of that city is called Be’er Sheva until this day.

And they were a  bitterness of spirit to Yitzhak and Rivka.

The author concludes the tale of Yitzhak the peaceful man with another example of his neighbourly common sense. Avimelekh has not treated him well, and his men have argued over the crucial supply of water through wells, but when he comes looking for peace and acknowledging Yitzhak’s blessings fromYHWH, he knows it’s an opportunity for lasting safety for both tribes and readily binds himself to peace.

On the other hand he knows that his own destiny under YHWH’s guidance is at present for his own family only. That explains why the Hittite wives of his son Esav are not fully accepted by him and Rivka. The blessing, as far as they know at this time, is to be carried by Esav their older son and they doubt whether it is compatible with “foreign” wives.

The familial (racial) basis of Jewish faith may seem strange to modern secular society and even to Christian believers, but we should remember that it is not, in the present age, an evangelical faith. It does not urge other people to take upon themselves the yoke of Torah, but accepts it as the calling of one people only, to be the means whereby God may bring blessing to all peoples. Judaism will become evangelical only in the “age -to-come”, when the Gentiles will seek Israel’s God. Until then Israel must bear witness. The beginnings of this faith are seen in the stories of the fathers and mothers of Israel. Clearly such a faith can be perverted into racial prejudice but ts origin is neither racist nor narrow.

It’s not so long ago in my culture – and may still be the case in others – that Christian parents were shocked if their children wanted to marry outside the faith. For such families faith was more important than race or culture. My own wife of almost fifty years is not and has never been a Christian believer, although she has generously supported my own calling throughout our marriage. My paternal grandfather, a man of great faith and courtesy, was troubled by her unbelief and remained hopeful till his death that she would find faith, because he believed family life was one of the main instruments of God’s spirit. I agreed with this belief but disagreed with his view that explicit Christian commitment was required of both partners.

I’m still of the same opinion, but now find myself faced with parents, neither of whom has any real faith at all, bringing children for Baptism. 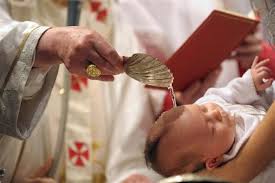 As a minister of the Gospel I wonder how families now can keep the baptismal promises they make “to bring up their children in the truths and duties of the Christian faith,” when they no longer see family life as a place for the expression and nurture of faith. I am sure we should continue the practice of infant baptism, but I can see that our provision of this sacrament is increasingly open to the criticism of Baptist Churches, that it has become empty of evangelical meaning. Other denominations of the Christian Church who also practice infant baptism may have more encouraging experience of this sacrament than the Church of Scotland.

12 And he began to say to them in parables, A man planted a vineyard, and made a fence round it and dug a wine-vat, and built a tower, and let it out to husbandmen, and left the country.

3 But they took him, and beat him, and sent him away empty.

4 And again he sent to them another bondman; and at him they [threw stones, and struck him on the head, and sent him away with insult.

5 And again he sent another, and him they killed; and many others, beating some and killing some.

6 Having yet therefore one beloved son, he sent also him to them the last, saying, They will have respect for my son.

7 But those husbandmen said to one another, This is the heir: come, let us kill him and the inheritance will be ours.

8 And they took him and killed him, and cast him forth out of the vineyard.

9 What therefore shall the lord of the vineyard do? He will come and destroy the husbandmen, and will give the vineyard to others.

10 Have you not even read this scripture, The stone which the builders rejected, this has become the corner-stone:

11 this is of the Lord, and it is wonderful in our eyes?

12 And they sought to lay hold of him, and they feared the crowd; for they knew that he had spoken the parable of them. And they left him and went away.

As Mark reports it, this parable is a simple allegory about Israel as God’s vineyard, the prophets as his messengers, the people of Israel (or maybe their leaders) as the husbandmen, and Jesus as the beloved son. It would have been very surprising if the religious leaders had not recognised this. But it is very surprising that Jesus should depict God as an absentee landlord demanding his rent. Such landlords were increasingly known in Jesus’ time and were increasingly unpopular. Perhaps Jesus is hinting that his own people had treated God like an absentee landlord making unwelcome  demands.

On the other hand this landlord is unusually patient and indeed naive: he puts up with repeated outrages and then thinks that they will respect his son! In this way Jesus represents the indignity of a God who risks the life of his son to gain the respect of his creatures.He also represents the arrogance of these human creatures who think they can take over the territory if they kill the heir. Whether we see the territory as Israel, the kingdom of God, or the earth, the vicious arrogance is only too clear.

The threat of dispossession and divine punishment is directed especially at the religious leaders, but may have been applied by his readers to the people of Israel, recently defeated and scattered by the Romans. They would also have interpreted the “others” of Jesus’ story as being the communities of his disciples. If Jesus actually told this parable as we have it, he probably meant either a) a remnant of Israel or b) the Gentiles.

When the imagery turns from vineyard to a building, readers would have interpreted it as referring to God’s House, the Temple, no longer seen as a physical entity but as a “temple not made with hands.” The rejected stone is found to be the cornerstone; the rejected son of God is found to be the one who holds God’s household together.

Mark does not scruple to depict Jesus as the crucified and risen Lord throughout his Gospel, nor to place on his lips words which belong to the time of the church rather than the time Jesus’ ministry. For him doubtless, the faith and worship of the church simply clarified the meaning of what Jesus did and said.

In a broader perspective, the parable portrays the behaviour of human beings who have received God’s gifts, whether these are seen as the earth and its fruits or as the message of God’s goodness. Often they forget that these are gifts, that God is looking for the fruits of goodness from his people, and turn the gift into a possession. Such people are quite capable of murdering God’s beloved son and ejecting him from their kingdom. This parable says that God knows where they live.

Tags: Baptism today, Isaac man of peace, The parable of the tenants