With apologies to regular readers for a short break from the sequence, the blog on Genesis and Mark resumes today. The  last one in sequence dealt with Yaakov’s proposal that he should keep the dark and streaked sheep of the flocks he shared with Lavan his uncle. The headline is a reminder of the world we live in.

Good, let it be according to your words;

and every speckled and dappled she-goat, every one that had any white on it,

and every dark one among the lambs

and handed therm over to his sons.

Then he put a three day journey between himself and Yaakov.

and peeled white peelings in the, exposing the white that was on the rods

then he presented the rods that he had peeled in the gutters, in the water roughs where the flock would come to drink.

Now they would be in heat as they came to drink;

this the flock came to be in heat by the rods

and the flock bore streaked, speckled and dappled young.

But the sheep Yaakov set apart

and gave position among the flock to each streaked one and very dark one amongst Lavan’s flocks;

thus he made special herds for himself, but did not make them for Lavan.

Yaakov would put the rods in sight of the flock animals, in the gutters, to make them be in heat net to the rods. But whe the animals were feeble, he would not put them there.

So it was that the feeble ones became Lavan’s and the robust ones, Yaakov’s.

The man burst forth with wealth exceedingly, yes exceedingly he came to have many flock animals and maids and servants and camels and donkeys.

Now he heard the words of Lavan’s sons, that they said:

Yaakov has taken away all that was our father’s,

and from what was our father’s he has made all this weighty wealth!

And Yaakov saw by Lavan’s face:

Look, he was no longer with him as yesterday and the day before.

and YHWH said to Yaakov:

Return to the land of your father’s, to your kindred.

I will be with you! 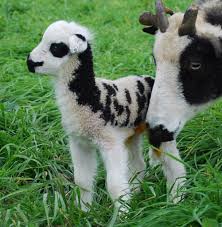 Here’s a challenge: try drawing a plan of the flocks as Yaakov arranged them according to this passage: I’ve tried it and realise that I don’t quite understand what was happening. It rests on the folk belief that whatever animals can see as they mate will determine the appearance of their offspring. So Yaakov’s rods in front of the robust animals produce streaked, speckled and dappled offspring for Yaakov and because they are robust they reproduce more fruitfully. So much I get, but what’s that about “giving position among the flock”?

Anyway, it’s clear that in spite of Lavan’s cheating described in the opening sentence above, Yaakov prospers at his expense and revenges himself for the way Lavan has treated him. But now, at the very moment when his success might prove counter productive and put him at risk from Lavan’s sons, behold! YHWH tells him to go home!

We might suspect that this voice is no more than that of Yaakov’s self interest, were it not for the fact that the command would take Yaakov away from one angry relative to another even more angry and more dangerous; Esav, whom he had cheated. But from the start of Yaakov’s journey YHWH’s blessing had included Yaakov’s peaceful return to the land of his forefathers. So YHWH’s word “return” asks Yaakov to put the blessing itself above his own safety and to take the risky road back home. It will bring Yaakov face to face with the wrong he has done to his brother.

At some point in our pilgrimage we begin to discover the true source of fruitfulness: it is not our own cleverness but rather God, who cannot be deceived and wants us face the truth about ourselves. To revisit those left behind  by our “success” is never an inviting prospect. The story lets us see how Yaakov / the Cheat deals with it.

14 But when ye shall see the “abomination of desolation” standing where it should not, (he that reads, let him understand it,) then let those in Judaea flee to the mountains;

15 and him that is upon the housetop not come down into the house, nor enter into it to take away anything out of his house;

16 and him that is in the field not return back to take his garment.

18 And pray that it may not be in winter time;

19 for those days shall be distress such as there has not been the like since the beginning of creation which God created, until now, and never shall be;

22 For false Messiahs and false prophets will arise, and give signs and wonders to deceive, if possible, even the chosen ones.

23 But you take heed: behold, I have told you all things beforehand.

This part of Jesus’ prophecy deals with the Jewish uprising put down with devastating force in 70 CE when the temple was destroyed by the conquering Roman armies. This is depicted in the words “abomination of desolation” which comes from the book of Daniel and refers to the Greek King Antiochus 4th, who made pagan sacrifices in the temple.The point is that conquering unbelievers have tried to make the place uninhabitable by God. We may sense that this language sees the catastrophe of 70CE as a something more than an historical happening, a special moment in God’s timetable when the forces of evil seem to have the upper hand and cause terrible suffering. Mark may have believed that this was preparatory to the return of Jesus as Messiah, but he includes Jesus’ warning that there will also be others who seize the chance to claim that title for themselves, as indeed was the case in the Bar Kochba rebellion of 135 CE

Mark wants to tell his readers who were living through the aftermath of these terrible events that Jesus had foreseen them and that they should continue to put their faith in him.

It’s possible that Mark would not have used the phrase “abomination of desolation” without thinking of the crucifixion of the son of God, by the will of the Jewish religious leadership and the hand of the Romans. If so, he is reminding his community that God is not separate from the evils of history and the sufferings of his people, but in his human son has borne with these as well. This should give confidence to people enduring suffering that God is not only at the end of it promising rescue, but also in the midst of it sharing the pain: God in Jesus inhabits the abomination of desolation.