This blog follows the book of Genesis and the Gospel of Mark in tandem. The series which started on 1/1/2015 can be accessed from my archives. The headline is chosen a reminder of the world we live in. 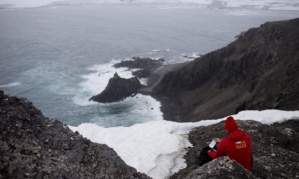 And YHWH said to Yaakov:

Return to the land of your fathers, to your kindred!

I will be with you!

So Yaakov sent and had Rahel and Lea called to the field, t his animals,

and said to them:

I see by your father’s face,

indeed his is no longer toward me as yesterday and the day before;

But the God of my gather has been with me!

but your father has cheated me and chamged my wages te times over;

yet God has not allowed him to do me ill.

If he said thus: the speckled ones shall be your ages –

all the animals would bear speckled ones;

and if he said thus: the streaked ones shall be your wages,

all the animals would bear streaked ones.

So God has snatched away your father’s livestock and given them to me.

that I lifted up my eyes and saw in a dream:

Look, the he-goats that mount the animals-streaked, speckled and spotted!

And God’s messenger said to me in the dream:

Lift up your eyes and see-

All the he-goats that mount the animals- streaked, speckled and spotted!

For I have seen all that Lavan is doing to you.

I am the God of Bet-El

where you anointed the pillar,

where you vowed a vow to me.

get out of this land,

and return to the land of your kindred!

Rahel and Lea answered him, they said to him:

Do we still have a share, an inheritance in our father’s house?

Is it not as strangers that we are though of by him?

For he has sold us and eaten up, yes eaten up our purchase- price!

they belong to us and to our children.

So now whatever God has said to you, do!

The rhythm of the story quickens as once more YHWH is introduced to the action, moving things forward by addressing his beloved human being in a vision. He is “heard” through his messenger in Jacob’s mind, but he does not directly interfere with the natural course of events. Jacob attributes his breeding trick to YHWH’s inspiration but clearly he had to work it out for himself. This God relies on the human ingenuity of his people. 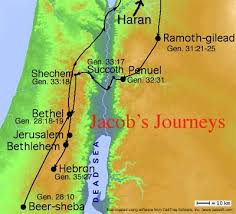 The main purpose of Jacob’s account is to face his wives with the proposal to leave Lavan as a call of God. The narrator reminds the audience of the challenge that faced Rivka, Yaakov’s mother, many years before – to leave family and clan territory and journey to the land of promise. Now they too make the decision to trust God and the man of God, leaving their father’s family behind. It is not a self-sacrificing choice-indeed they think that it will work to their advantage and that of their children. But it is a bold choice rather than a safe one. The audience has seen, especially in the story of the sacrifice of Yitzhak, that God can demand incomprehensible obedience from his people, but more often the influence of YHWH is a quiet pressure towards bold and decisive action which requires a degree of trust in the blessing. In this case, Yaakov’s choice involves either  resignation or recklessness in the face of the probable threat from his bother Esav. He does not mention this probability to his wives, who will ultimately play an important role in his plan to soften his brother’s heart. We know that Yaakov is not conventionally brave, so we must regard his decision to return to Canaan as evidence of his gambler’s instinct for the right throw of the dice.

The audience will have begun to see that YHWH too is gambling on the character of his people Yaakov, Rahel , Lea and their children.

24 But in those days, after that distress, the sun shall be darkened and the moon shall not give its light;

25 and the stars of heaven shall be falling down, and the powers which are in the heavens shall be shaken;

26 and then shall they see the Son of man coming in clouds with great power and glory;

27 and then shall he send his messengers and shall gather together his chosen from the four winds, from end of earth to end of heaven.

28 But learn the parable from the fig-tree: when its branch already becomes tender and puts forth the leaves, you know that the summer is near.

29 Thus also you, when you see these things happening, know that it is near, at the doors.

30 Amen, I say unto you, This generation shall in no wise pass away, till all these things take place.

31 The heaven and the earth shall pass away, but my words shall never pass away. 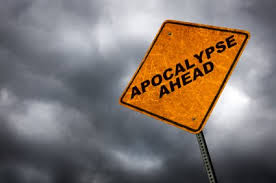 The language of this part of Jesus’ prophecy is more “apocalyptic” – stars falling and the like- but modern scholarship has tended to suggest that such phrases have a more mundane meaning than we might think. In Jesus’ day and place, the heavenly bodies were seen primarily as god-like powers rather than as gaseous or solid material  bodies as today. As such they influenced the power structures of the earth. Nations would be dominant because their stars considered to be so. People would rise to power under the influence of their birth-stars. With such a perspective we can see that the cosmic turmoil prophesied by Jesus is primarily a statement that the powers which rule the earth will be displaced, in this case by the arrival of God’s rule. The human dimension of this rule will be the gathering of all who trust in and hope for it, doubtless those who have responded to the universal preaching of the Good News mentioned in yesterday’s passage.

But who is the Son of Man who will be seen coming in cloud with great power and glory? An examination of Daniel chapter seven reveals this to be not so much a person as a certain kind of rule. In that chapter evil rule is represented by savage beasts, and finally good rule by “one like a son of man”, that is, like a human being, representing humane government. So the “Son of Man” is a biblical code word for the rule of God and his holy ones. Doubtless the first believers identified Jesus with this figure, and it may be that Jesus saw himself as the representative of God’s rule on earth and of all the holy ones of God. Probably Mark trusted that the One ultimately sent by God to enforce his rule would be none other than the One who had established it through his life, death and resurrection. In fact, one of the apocalyptic markers above, the sun being darkened, is used by Mark in Jesus’ crucifixion. For him that event especially is the arrival of God’s rule.

The timing of all this is a relevant issue. Jesus appears to say that it will be in the lifetime of his disciples. Or we could say, if we think of Mark writing these words, in the lifetime of Mark’s generation. Some think that Jesus and Mark expected the arrival of God’s rule on earth in the lifetimes of the first believers. There is evidence that St Paul thought so. We should not be scared to say: they were wrong. Let me be clear: if Jesus said the words attributed to him by Mark, AND we interpret them in the obvious way, he was wrong.

So maybe there is a less obvious interpretation. Maybe God’s kingdom is not within the historical flow of time or at its end, but aslant it, so that in some sense the rule of worldly power and the the rule of God co-exist in different dimensions, so that what we see in the worldly dimension as the defeat of goodness and the triumph of evil is simultaneously in the heavenly dimension, the victory of goodness and the judgement on evil. Something like that interpretation I think is found in the Christian book of The Apocalypse/ The Revelation in the bible. I won’t spell this out in greater detail here, but simply leave the suggestion that if we think of God’s Rule in this way, then it will come in every generation, including our own. In every generation God’s Rule through the Son of Man Jesus, arrives and is welcomed by those who are, in Jesus word, “watching.”