This blog continues to follow the books of Genesis and the Gospel of Mark in tandem. The series which began on 01/0102015 can be accessed from my archives. The headlines are reminders of the world we live in.

Yaakov lifted up his eyes and saw:

There was Esav coming, and with him, four hundred men!

He divided the children among Lea, Rahel and the two maids,

he put the maids and their children first,

Lea and her children behind them

and Rahel and Yosef behind them,

while he himself advanced ahead of them.

And he bowed low to the ground seven times, until he had come close to him, to his brother.

Esav ran to meet him,

he embraced him, flung himself on his neck and kissed him.

Then he lifted up his eyes and saw the women and the children, and said:

What are these to you?

the children with which God has favoured your servant.

Then the maids came close, they and their children and bowed low;

Then Lea and her children came close and bowed low;

What to you is all this camp that I have met?

To find favour in my lord’s eyes.

I have plenty my brother, let what is yours remain yours.

Pray if I have found favour in your eyes,

then take this gift from my hand.

For I have after all seen your face, as one sees the face of God,

and you have been gracious to me.

Pray take my token of blessing that is brought to you,

for God has been gracious to me, and I have everything.

And he pressed him, so he took it.

Let us travel on and  will go at your side. 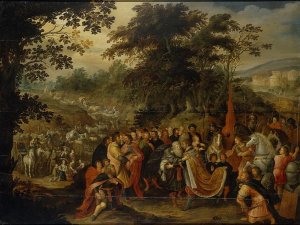 But he said to him:

My lord knows that the children are frail

and the sheep and the oxen are suckling, in my care.

If we were to push them for a single day, all the animals would die.

Pray let my Lord cross on ahead of his servant;

while as for me,  will travel slowly,

until I come to my lord and Se’ir.

Pray et me leave with you some of the people who are mine.

May I only find favour in my lord’s eyes!

So Esav started back that same day on his journey to Se’ir,

while Yaakov travelled to Succot.

He built himself a house there and for his livestock he made sheds.

Therefore they called the name of the place Succot / Sheds.

Now that Yaakov/ Israel has seen the face of God, he is ready to face his test: to meet the brother he once wronged. He again arranges his “troops”, his family but this time he has the courage to place himself in front of them. The storyteller has kept his audience in doubt until this moment but now swiftly he shows Esav rushing to embrace his brother, demonstrating his goodwill. The future Yaakov dreaded has come upon him as a moment of grace.But he is still Yaakov, still cautious, offering his gifts to Esav as to a king and rebuffing Esav’s enthusiasm for a companionable relationship. He wants a little distance between them.

Still he puts into words his joyful understanding of what has happened: Esav has come to him in the goodness of his human heart, but Yaakov greets his face, his presence, as the face of God. There is no mythical mingling of God and human beings, yet as I have noted before in this series, these people are the humanity of God, learning how to be a blessing to the world. The storyteller shows them moving slowly in an immense and largely uninhabited landscape, dreaming their own dreams, using their own cunning and courage, yet capable of a vulnerable dignity that reminds us, they are made in the likeness of God.

Genesis does not on the whole tell us how to behave, but rather reveals who we are and what we can be. God does not stand off from our sometimes ugly humanity – sometimes indeed he seems to delight in it – but he helps us learn how to become what he intended from the start, his agents in his creation.

27 And Jesus says to them, All of you shall lose faith in me, for it is written, I will smite the shepherd, and the sheep shall be scattered abroad.

28 But after I am risen, I will go before you into Galilee.

29 But Peter said to him, Even if all should lose faith, I will not.

30 And Jesus says to him, Amen I say to you, that you to-day, in this night, before the cock shall crow twice, you will deny me three times..

31 But he said so much exceedingly the more, If I should have to die with you, I will in no way deny you. And so said they all too.

He says  that it’s easy to lose faith (literally to be offended) by the one who goes to the cross. When the shepherd is killed the sheep will be scattered. But when he is risen will they heed his call and gather to him again? Probably by the time Mark was writing followers of Jesus had found that they might be made to suffer for their belief. Jesus’ words about losing faith would doubtless have touched a cord with them. Recently I’ve had to mention to church congregations in Scotland that their brothers and sisters in Pakistan, Syria, Egypt and Iraq were taking their lives in their hands to worship each Sunday. To be loyal to the one whose loyalty took him to death has always been hard.

At times of safety Christian worship may be no more than Peter’s bluster, “I will never deny you!” if the believer is not ready to follow the offensive Jesus into unpopularity or loss. Believers who have never been put under pressure may be as ignorant of their cowardice as Peter was. When I knew myself less well than I now do, I often thought that, had I been there, I would have been more courageous  than Jesus’ disciples. Now I know better and find their cowardice consoling.