this blog has been following the book of Genesis and thenGospel of Mark in tandem. The whole series from 01/01/2015 can be accesses from my archive. The headlines are reminders of the world we live in.

OBAMA AND CASTRO A  HISTORIC HANDSHAKE

Yaakov came home in peace to the city of Shekhem which is in the land of Canaan.

On his homecoming from the land of Aram, he encamped facing the city.

from the sons of Hamor, Shekhem’s father, for a hundred lanbs’ worth.

There he set up a slaughter site and called it:

Dina, Lea’s daughter whom she had borne to Yaakov,

went out to see the woman of the land,

and Shekhem, son of Hamor the Hivvite, the prince of the land, saw her.

He took her, and lay with her, forcing her.

But his emotions cling to Dina, Yaakov’s daughter – he loved the girl

and he spoke to her heart

So Shekem spoke to Hamor his father:

Get me this girl as a wife.

Now Yaakov had heard that he had defiled Dina his daughter,

but since his sons were were with his livestock in the fields, Yaakov kept silent until they came home.

Hamor, Shekhem’s father, went out to Yaakov, to speak with him.

and the men were pained, they were exceedingly upset,

for he had done a disgrace in Israel,  by lying withYaakov’s daughter,

such a thing is not to be done!

Hamor spoke with them,  saying:

his emotions are so attached to your daughter,

.Uso pray give her to him as a wife!

and make marriage alliances with us,

and settle  among is.

the land shall be before you;

settle down, travel about it, obtain holdings in it

And  Shekhem said to her father and her brothers:

May I only find  favour in your eyes!

However much you say to mean, I will give in payment,

I will give however much you say to me –

only gove me the girl as a wife!

The storyteller makes this savage story into a test for Yaakov. The Hivvites look on Dina as a commodity with whom Shekhem is infatuated; and even he sees her a something he must possess. His rape of her is to be forgotten because he loves her! Dina is repeatedly described as ‘the girl ‘ and  the modern reader may imagine that the original audience while holding patriarchal assumptions would have found their behaviour revolting.

Jacob is hesitant for two reasons: he needs the support of his sons, although he anticipates their fury; and he is presented with a chance to settle in Canaan and to prosper. It it too good a chance to miss?

The story of Dina takes the audience back to the main issue of the whole narrative of the ancient fathers, namely, the promise of the land and the nature of God’s blessing.

32 And they come to a place of which the name is Gethaemane, and he says to his disciples, Sit here while I shall pray.
33 And he takes with him Peter and James and John, and he began to be amazed and oppressed in spirit.
34 And he says to them, My soul is full of grief even unto death; abide here and watch.
35 And, going forward a little, he fell upon the earth; and he prayed that, if it were possible, the hour might pass away from him.
36 And he said, Abba, Father, all things are possible to you; take away this cup from me; but not what  I wiish, but what you wish.
37 And he comes and finds them sleeping. And he says to Peter, Simon, are you asleep? Have you not been able to watch one hour?
38 Watch and pray, that you enter not into temptation. The spirit indeed is willing, but the flesh weak.
39 And going away, he prayed again, saying the same thing.
40 And returning, he found them again sleeping, for their eyes were heavy; and they knew not what they should answer him.
41 And he comes the third time and says to them, Sleep on now, and take your rest. It is enough; the hour is come; behold, the Son of man is delivered up into the hands of sinners.
42 Arise, let us go; behold, he that delivers me up has drawn near. 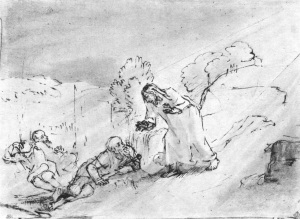 Dietrich Bonhoeffer, writing from a Nazi prison, says that nothing is less congenial to human beings than to share the weakness of God in the world. The God who moves the sun and the other stars by love can move nothing by force. Even Jesus found this hard. He imagines that his dear father can intervene to sort things out, to take the cup of suffering away; and his human flesh shrinks from the ordeal ahead of him. But we have to say as a result of Jesus’ suffering, that there is no God behind the God who does not intervene to save his dear son. The only God is the God of the crucified Jesus. That’s why as John realised, God does not come and get Jesus from death; rather, Jesus goes to the Father by way of the cross. That’s why, although I believe in the real resurrection of Jesus, and in his risen body, I do not believe in corpses flying out of tombs.  Supernatural hocus-locus makes nonsense of Jesus’ agony in the garden and on the cross.

I know this may seem both harsh and perhaps heretical to some readers of this blog, especially maybe to those who are celebrating Easter this weekend. But I would invite them to read again the story of Gethsemane and ask if Bonhoeffer may not be right. As he says, ‘God is pushed out of the world on to the cross.’