In my last blog on the Corinthian correspondence of Paul I promised an additional blog on issues of sexual behaviour from a Christian point of view. Of course there are many Christian views on these issues, especially on contentious issues like same-sex relationships, and I would not pretend that my own standpoint is better than others. 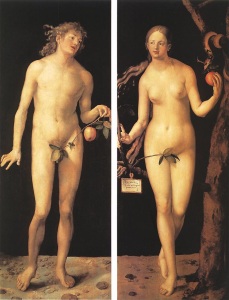 The bible is a good deal less obsessed with sex than contemporary Scottish society, but it does contain both discursive and narrative writing on this topic.

The most important of these for a Christian believer is Jesus’ teaching given in reply to a question about the Torah rule permitting men to divorce their wives by giving a written declaration of fault. In line with a legal view that the wife was the man’s possession, this was really no more than permission to return goods which were considered not fit for purpose.

Jesus’ response, as quoted by Mark acknowledges the Torah but interprets it as a rule given only to prevent something worse because Moses knew the hardness of male hearts. Jesus contrasts this with God’s intention in the “beginning” expressed in his creation of male and female beings out of a single original human, so that they would always desire to become one flesh again. According to Jesus this fundamental desire lies behind the institution of marriage which takes a male away from his own family to be united with a woman in a  new creative partnership designed by God. The sexual act constitutes a unity which is not disposable by divorce. Nobody should separate what God has joined together.

Although this would seem to have ruled out divorce for disciples of Jesus, it’s clear that Jesus words reported by Mark were seen as a statement of God’s intention rather than a rule, so that Matthew modifies the saying to include, ‘ except for reason of sexual misconduct.’ Doubtless different Christian communities interpreted Jesus’ teaching in different ways. ( Mark 10:1-12; Matthew 19: 1-12)

It’s clear that Jesus was correcting the male bias of the Torah while insisting on a an unbreakable partnership which some women as well as some men may have found unfulfilling or even destructive. If we are to praise Jesus for his radical statement of God’s purpose, we should also as the first Christians did, recognise its dangers and provide ways of avoiding them.

We can also however see Jesus’ teaching as thoroughly Jewish in thinking of marriage as the purpose of human sexuality. But the idea that human sexuality has a purpose looks like the sort of muddle that results from confusing cultural constructs with biological facts, so it’s probably a good moment to check Jesus’ teaching against the five tests I proposed yesterday.

2. Jesus’ teaching sees sexuality as fundamental to the physical and psychological nature of men and women.

3. It interprets sexual pleasure as the desire to be complete human beings. Their physical coupling is God’s plan.

4. Human sexuality is explicitly related to that of animals which are also commanded to ‘multiply’ although of all animals only human beings are made in the likeness of God. The story holds a balance between human beings as animals and human beings as God’s representatives on earth. Jesus’ insistence on the the physical act which unites male and female recognises the animal likeness, whereas his recommendation of indissoluble faithfulness recognises the divine likeness.

The modesty, sanity and brevity of Jesus’ teaching is in stark contrast with the deluge of sexualised nonsense offered by our media, and with the nervous wittering of so many church assemblies.