Since this blog has clocked up more than 1800 information-packed commentaries on scripture, I may be excused a paragraph about what it adds up to.

Firstly it is a record of my bible reading habit over six years, which usually has been daily from Monday to Friday with occasional omissions during the week and occasional additions on Saturdays. I’ve sometimes managed to continue it during holidays, sometimes not. Lately I’ve started another blog xtremejesus.co which is more directly political and which takes the place of the bible blog on two days a week. In he first instance I blog for myself so that I have a record of my own responses to scripture over time, but it has also proven useful to readers from the UK, USA, Canada, South Africa, Myanmar, and a number of other countries. The comments I have received have given me the privilege of acquaintance and sometimes friendship with people of different traditions and beliefs.To them I record my thanks.

The website now stands as a public record and resource. I am not an expert scholar, simply a reasonably diligent reader with a passion for understanding the Christian Bible and applying its wisdom to my life. If you want to check if I have dealt with a passage that interests you, then google emmock.com plus the scripture reference, thus: emmock.com john 3.16. If you are interested in a particular topic, google emmock.com plus the topic word, thus: emmock.com Satan. The WordPress system provides a note of some other related blogs at the foot of each blog. The news headlines which do not have any special relevance to the blog other than they come from the news of the day, which I often access from the Spanish Newspaper, El Pais.

I have just completed a reading of The Revelation and have decided to begin today a new series which will look at the Psalms, or at least the first book of them, that is Psalms 1-41. I am even less of an expert in Hebrew than I am in Greek, but I will study the Hebrew and usually give the reader my own translation of the Psalm for the day. The Psalms collected in the Hebrew bible were written over a period of perhaps 800 years, and are difficult to date. Probably none of them were written by King David and their true authors are unknown. They were used in the worship of the second temple in Jerusalem and have been used in most traditions of Christian worship, including that of the Church of Scotland, in which they were versified into such international favourites as “The Lord’s my shepherd” and “All people that on earth do dwell”. They are poetic songs and should be appreciated as such. They are also not free of prejudice, (they hardly mention women) and inappropriate emotions (they ask God to smash the faces of enemies). In other words, they speak my sinful language.

How happy is the man

Who does not walk by the directions of the wicked

Nor stands on the road of the wrongdoers

Nor sits in the seat of the insolent;

but his pleasure is in the Law of the Lord

which he memorises day and night.

He shall be like a tree planted by the waterside

That yields its fruit in due season

Whose leaves do not wither;

Whatever it does, thrives.

The wicked are different:

So the wicked shall not stand in the face of judgement

Nor wrongdoers in the assembly of the just;

For the Lord watches over the way of the just

But the way of the wicked shall fail. 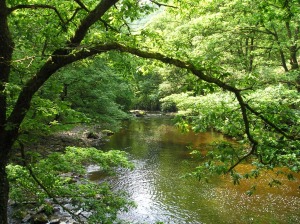 This is an introductory Psalm, placed here at the beginning of the collection. The five books of the Psalms were intended to accompany the five books of the Torah, the Pentateuch. Some of the psalms are addressed to God, as prayers, laments or petitions, and others like this one are simply poems, distilling the experience of faithful people.

The psalm has a clear structure:

The wicked people are characterised by another vivid image (2B)

and defined by what they cannot do.(2A)

It’s a simple elegant form that mimes the argument of the psalm.

The negative phrases at the beginning show by means of verbs what the happy man does not do: he does not walk…. stand….or sit. These verbs depict the moral and spiritual life of the man in physical terms: This reflects the practicality of the Jewish faith. A just person walks in God’s paths; stands in the road of righteousness; sits in the seat of wisdom. Goodness (and evil)  is a direction and implies a journey. Wisdom (and folly) is communal and implies conversation. The just person refuses to be directed by popular immorality, or to permit herself common sorts of wrongdoing, or to give comfort to evil people by sneering at goodness. Her behaviour is guided by the Torah, the Law of God given in the books of Moses. Learning this Law is her pleasure or delight; it is no chore. She memorises it (literally, mutters it) day and night.

The image of the tree is not original but part of a common stock of wisdom. In very hot climates, trees are a welcome sign of shade and water. There are trees that grow elsewhere but their lives are precarious, and perhaps dependent on artificial water supplies. I have used “waterside” in my translation to give the sense that this is traditional language but “streams of water” might be more accurate. These would be a tree’s best chance of staying green and bearing fruit. The just person, by her walking, standing and sitting in the right places, has found a reliable source of life-giving energy. The true path, the right road and the seat of wisdom, into which she is directed by God’s Law, are the channels of this energy, which allows her to thrive. Here is an organic understanding of goodness which suggests that firm habits of right behaviour, learned from the Law book and the people of the book, give a person access to the elements that nourish human life.

In contrast the life of the wicked, that is, those who have no concern for goodness but only for their own desires, gets short shrift. In another traditional image it is depicted as lightweight and valueless, easily swept away by the wind. It has no organic connection to the source of life. In the place of judgement – the civil courts – such a person will not be able to sustain their cause, nor will they be acceptable in religious or secular assemblies of decent citizens. Some suggest that judgement refers to God’s judgement but I think this goes against the argument of the psalm, which is that good people enjoy life and honour and that evil people don’t.

The summing up is brief but savage: God “watches over” the way of the just. Literally God “knows” it, which in Hebrew means an intimate knowledge like that of husband and wife. God is lovingly concerned with the lives of just people. As far as the wicked are concerned, it’s as if God had no knowledge of them. They fail, they go to their destruction.

I’ve used feminine pronouns above because the psalm translation uses masculine ones.

In all biblical images of binary separation, wise and foolish, blessed and cursed, sheep and goats, saved and damned, I have found it useful to think that the dividing line goes through the middle of people rather than between them. In this psalm that means I should see myself as both just and wicked, both happy and unhappy. I should expect to find the characteristics of both in my own character, sometimes mixed together in very complicated ways. The psalm by its clear disentangling of the two characters allows me to see where I am fruitful and where I am sterile and why. It challenges me to read my bible, take heed of its commandments and keep firm standards in my everyday life, so that I can remain connected to the source of true life. It warns me what will happen if I don’t.