I have just completed a reading of The Revelation and have begun a new series which will look at the Psalms, or at least the first book of them, that is Psalms 1-41. I am even less of an expert in Hebrew than I am in Greek, but I will study the Hebrew and usually give the reader my own translation of the Psalm for the day. The Psalms collected in the Hebrew bible were written over a period of perhaps 800 years, and are difficult to date. Probably none of them were written by King David and their true authors are unknown. They were used in the worship of the second temple in Jerusalem and have been used in most traditions of Christian worship, including that of the Church of Scotland, in which they were versified into such international favourites as “The Lord’s my shepherd” and “All people that on earth do dwell”. They are poetic songs and should be appreciated as such. They are also not free of prejudice, (they hardly mention women) and inappropriate emotions (they ask God to smash the faces of enemies). In other words, they speak my sinful language. 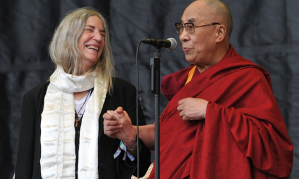 PSALM 2 Why do the nations ?

Why do the nations conspire

And their peoples make empty plans?

The kings of the earth take up position

And their rulers discuss strategies

Against the Lord and his Anointed One:

“Let’s rip their defenses to shreds

And shake ourselves free of their fetters.”

The one who sits in the sky laughs,

The Lord derides them.

Then he speaks to them in his anger

And terrifies them in his rage;

“I, yes I, have installed my king

On Zion my holy mountain.”

I will announce the Lord’s decree;

Today I have fathered you.

Ask me and I shall give the nations as your inheritance

And the ends of the earth as your territory.

You will break them with an iron bar

So now, you kings, be wise!

Be biddable, you rulers of the earth!

Serve the Lord with fear!

Tremble and rejoice to submit to the King!

In case the Lord is angered

And you have a fatal accident,

For his rage is easily kindled.

How happy are those who take refuge in him.

This is a slightly shouty piece of work, just as is every nationalistic song in which smaller nations show their defiance of larger ones. Scottish songs, such as “Scots wha hae wi’ Wallace bled” or the lugubrious football anthem, “O Flower of Scotland,” are good examples of the genre. At least they don’t bring God into it, like this Psalm. As I write the ruling class of the land will gather in Westminster Abbey to give thanks to God for the sacrifice of the Battle of Britain pilots in 1940. They will assume that God was on our side in that conflict, just as they tended to assume he was also on our side when we were pillaging India or destroying Saddam, while wisely judging He might not support us in hanging on to Hong Kong.

We do not know the date of this Psalm and so cannot tell if it was written for a particularly threatening situation.Israel may have had more excuse for such songs than most nations, because apart from a time of minor imperialism under King David, they were always small and liable to get a kicking from the big boys round about them. It may come from the time of the monarchy as it uses language which comes from the coronation ceremony, in which God acknowledges the king as his son, albeit the prophets insisted that Israel itself was God’s son. Possibly, by the time this psalm was placed at he beginning of the Book of Psalms,  this language had been applied to the Anointed One, the Messiah, the expected leader from God. In that case it would be placing the messianic hope at a prominent place in the people’s hymnbook.

It’s a vigorous song, which imagines the arrogant plans of the bully boy nations arousing the mockery of Israel’s God. The image is powerful like the image of Zeus in Homer who is never flustered and often amused by the arrogance of mortals. God insists that he has enthroned his own King on Mount Zion, the hill of the temple. The king in turn gives witness that he is enthroned as God’s Son, “begotten” by him in the coronation ceremony. Scholars use the term “adopted son” but I can’t see any mention of that in the Hebrew: God begets the King. Indeed that’s why these verses were often applied by Christian commentators to Jesus, the “only-begotten son of God.” Of course, if we took this scripture literally we would have to see Jesus as only one of God’s begotten sons (!).

The notion of “divine kingship” was common in the ancient world, and even afflicted unfortunate European monarchs like Charles 1st of Britain, Louis 14th of France, and many others. In Israel, the King was not considered divine but rather the channel of God’s fatherly justice towards his people. In this case God declares that his will and testament already promises his Son the whole earth as his inheritance. Probably this promise does not mean universal conquest but rather God’s justice exercised by his Anointed One for the benefit of all the earth. I’m never sure however with these promises, if the inhabitants of all the earth are going to be asked if they want it. Talk of iron bars and smashed crockery points to something more robust than democratic choice.

The direct commands to the kings and rulers are issued with all the relish of a Mafia boss meeting official power with real power and the accompanying threat is made in authentic mafia language, “Take care to avoid a nasty accident because the big man has a very bad temper.” (Hebrew tho’b’du derech: lest you perish on the way) The advice to tremble and…submit is my translation of a Hebrew phrase which has probably been corrupted by scribes, but it means something like that. I’m not sure if the psalmist makes out a good case for non-Jews being happy to take refuge with this God but he does make it sound a good insurance policy.

I have exaggerated the mafia style, but not much. The psalmist is a good deal less pious than his modern readers, who are looking for some religious message. Here is the poet of a small country under threat from larger neighbours hurling his uncouth defiance at them all. It’s like the spiky Scottish thistle saying “nemo me impune lacessit” (Wha daur meddle wi me?), adding in this case that if an enemy doesn’t rate its army, it ought to reckon with its God and give him the body swerve. Yet embedded in this politically incorrect faith there is the marvellous conviction that God is not the God of the big battalions but the God of small people, the God of David, not Goliath. It’s a Psalm which could well be sung today by any Tibetan or Palestinian; or indeed by Mariem Hassan, the Sahrawi singer who died this week. She sang for her people of the West Sahara, no sooner liberated from Spain than occupied by Morocco. If you listen to her songs you can hear the voice of the God of small people, fierce, unconquered, uncompromising.