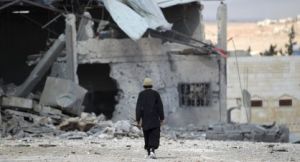 How long my Lord

Will you forget me altogether?

Will you hide your face from me?

Will I have trouble in my soul

Sorrow in my heart all day?

will my enemy triumph over me?

and answer me my Lord!

Give my eyes light

Lest I sleep the sleep of death

Lest my enemy say,

I have overcome him

dance at my defeat!

But I have put my trust

In your steadfast love

And I will dance

When you rescue me.

I will sing to my Lord

because he has cherished me.

This is a strong psalm, succinct and definite in its complaint to God. Its repeated use of the cry “How long?” which comes from the experience of the prophets, is powerful. My Spanish bible comments that “God’s time and human time are different”. Well, yes, and that’s just the problem: “a thousand ages in thy sight/ are like an evening gone” is a  hard saying for those whose lives are limited by age and death. The psalmist wants God to know that human beings are mortal and can’t wait for ever for God’s justice.

The wall in Gaza
“How long?”

The appeal in the first verses is like that of a disregarded courtier to neglectful king. The psalm accuses God of “hiding his face”, which in the language of the court means paying no attention to his case. God’s neglect means a) that the petitioner is grieved and b) that his enemy can continue to oppress him. The petitioner dares to cry out to his Lord with an imperative verb, “Look now” risking a stern rebuke but communicating his urgent need. If the Lord does nothing then the enemy will win and the petitioner’s other foes will celebrate his defeat with dancing.

The climax of the psalm however is not God’s answer, or God’s rescue, but a quiet statement of the petitioner’s trust. He has put his trust In his Lord’s “chesed”, that is, his loving kindness or steadfast love. The verb is in the perfect tense; this trust has already been put in God. And because of this past commitment, the petitioner is able to assert that he “will dance” when God rescues him. The commitment made to God enables the petitioner to expect a joyful future.

But it does not deny the urgent petition which has been made; rather it is the reason the petition can be made at all. In the face of his own suffering and God’s silence, we realise that it is the petitioner’s trust that leads him to excuse God by addressing him as a ruler who may have a lot on his plate. The quiet trust of the petitioner gives life to the common image of God as a king and to use it as a means of getting attention: “God, if you’re really like a king, could you understand that it’s time you listened to me?”

The last lines are carefully constructed. The petitioner will (now and in the future) sing to God, because God has cared for him (by what He has already done). God’s record of care for this petitioner and his people Israel enables worship now, even in the midst of danger.

It’s a wonderful psalm which exists also in a wonderful version by John Bell and Graham Maule, song 14 in “When Grief is raw” Songs for times of sorrow and bereavement. Wild Goose Publications.