WHO HAS WELCOMED THE SYRIAN REFUGEES? ( in Spanish but you can cope!)

11 The next day Yeshua, accompanied by his disciples and a large crowd, went to a town called Na‘im. 12 As he approached the town gate, a dead man was being carried out for burial. His mother was a widow, this had been her only son, and a sizeable crowd from the town was with her. 13 When the Lord saw her, he felt compassion for her and said to her, “Don’t cry.” 14 Then he came close and touched the coffin, and the pallbearers halted. He said, “Young man, I say to you: get up!” 15 The dead man sat up and began to speak, and Yeshua gave him to his mother.[a] 16 They were all filled with awe and gave glory to God, saying, “A great prophet has appeared among us,” and, “God has come to help his people.” 17 This report about him spread throughout all Y’hudah and the surrounding countryside.

Chapter 7 of the Gospel depicts Jesus bringing God’s goodness to the poor: a Roman slave, a destitute widow, a woman with a bad reputation. The story of the centurion’s slave comes from material that Luke has in common with Matthew, whereas the other two stories are found only in Luke.

Luke’s purpose in this chapter is revealed in an interlude in which Jesus is questioned by messengers from John the Baptist and replies by pointing to his healings and preaching as a fulfilment of prophecies. Luke is reminding his readers that God’s rescue (salvation) of his people is happening in the ministry of Jesus, and that it is directed especially at those who have no power or prestige.

Jesus is depicted as doing the unthinkable by interrupting a funeral procession, but he does so with sovereign assurance. Luke simply describes him here as “the Lord” a title he almost certainly was not given until after his death and resurrection. This is the title used by Jesus’ contemporaries for God. But Luke emphasises that this godlike figure is moved by compassion for the woman who has just lost her last support in life.

Luke is careful to exclude all mumbo-jumbo from Jesus’ actions. He simply commands the young man to ‘rise up’ using the verb which became associated with his own resurrection. The words ‘gave him to his mother’ are significant. The youth is momentarily in Jesus’ power, he belongs to Jesus, who returns him to his mother. In all of this the focus is upon the mother who needs her son, rather than on the son who has lost his life.

Throughout this episode Luke wants to remind the reader of the story of Elijah and the widow’s son ( 1 Kings 17) whom the prophet revives by ‘stretching out on top of him.’ By contrast, Jesus simply gives a command. No wonder the people are filled with awe. But Luke also shows their understanding faith both in Jesus as a great prophet and in God who has turned towards his people. Luke is always writing THEOLOGY, that is, his story of Jesus is simultaneously a story of God’s fulfilment of his ancient promises in the Torah and the prophets, that He will bless his people so that they may be a blessing to all nations. 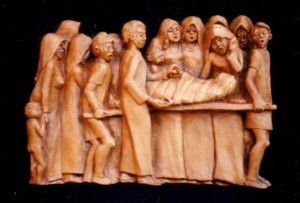 Obviously Luke believed that Jesus could do things like this. His main purpose however is not to make his readers wonder at Jesus’ power, but rather to reveal him as the embodiment of God’s compassion, bringing life into a world of death. This image of Jesus as a the source of life is common to all four gospels, and is therefore deeply embedded in the first believers’ memory of Jesus. Luke’s image of Jesus as also the bearer of God’s rescuing justice for those on the margins of society is also shared by Matthew and Mark, and would also seem to be an authentic memory of Jesus, as well as an indication of the social status of people who formed the first assemblies of Jesus.

The tradition of Jesus’ miracles grows out of the joyful astonishment of the first believers at the transformation of their lives within the assemblies. Here there was no condemnation or exclusion, no domination of the poor by the rich or of women by men, no fearful abandonment of the sick, no going hungry while others feasted, but rather dignity, equality, partnership, healing and happiness. This transformation was in itself such a miracle, that stories of miraculous goodness abounded, and many were ascribed to Jesus, the Lord who was alive amongst them. These are rebellious stories that challenge the limits imposed on human creativity and joy by the ruling powers of the world. God, in the weakness, poverty and indignity of his son Jesus had challenged these powers, they believed, and had defeated them!

The gospel stories of Jesus reflect this faith. In respect of healing I think that the true inheritor of Jesus’ miracles is not the church but scientific medicine which proceeds from a similar unwillingness to accept illness and premature death. Probably we should greet the healing achieved in our health service with praise to God who has come to help his people.

But did this really happen? I think not, but in my examination of the story of Jairus daughter ( see Luke 8) I found that there are many stories in the ancient world of healers raising the dead, and evidence that some healers may have been good at telling when the person was in coma and not dead, so that they could be revived.  Jesus may have had this skill. But what impressed others and is expressed by the gospel authors was his concern for the poor and his ruthless battle against the powers of death.