LIVING UNDER THE FREEWAY IN BUENAS AIRES THE HIDDEN POOR 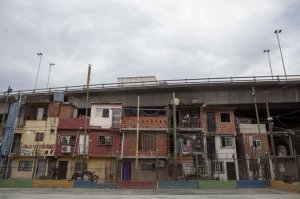 ‘See, I am sending out my messenger ahead of you;
he will prepare your way before you.’[c]

28 I tell you that among those born of women there has not arisen anyone greater than Yochanan the Immerser! Yet the one who is least in the Kingdom of Heaven is greater than he!”

29 All the people who heard him, even the tax-collectors, by undergoing Yochanan’s immersion acknowledged that God was right; 30 but the Pharisees and the Torah-teachers, by not letting themselves be immersed by him, nullified for themselves God’s plan.

31 “Therefore,” said the Lord, “how can I describe the people of this generation? What are they like? 32 They are like children sitting in the marketplaces, calling to one another,

33 For Yochanan has come not eating bread and not drinking wine; and you say, ‘He has a demon!’ 34 The Son of Man has come eating and drinking; and you say, ‘Aha! A glutton and a drunkard! A friend of tax-collectors and sinners!’35 Well, the proof of wisdom is in all the kinds of people it produces.”

In this chapter Luke is showing how Jesus’ ministry reached those on the edge of decent society, the slave, the foreigner, the widow. Luke also wants to insist that this is all according to the scriptural prophecies. Material about John the Immerser which Luke shares almost word for word with Matthew’s gospel, is placed here because it gives Jesus’ view of his own ministry and refers to appropriate scriptures (here printed in bold).

John the Immerser, whose disciples were active well beyond Israel and the life of Jesus as mentioned in The Acts of the Apostles, was admired by followers of Jesus, but deliberately characterised as a forerunner for Jesus. As we see in this incident, John himself was not sure about Jesus as the expected Messiah. Luke shows Jesus dealing gently with John’s enquiry, pointing to his healing and preaching as fulfilment of bible prophecy. He adds a blessing on those who are not “offended” by Jesus. The Greek is “skandalizein” from which the English “scandal and scandalize” are derived. Its literal sense describes an ancient weapon, the “stumbling block”strewn in the feet of attacking enemies. It is the gospel word for the an important dimension of Jesus’ ministry: it causes people to stumble. People who are sure they are mere sinners are tripped up by Jesus’ confidence in them; righteous people are tripped up by his lack of confidence in them. The people who follow Jesus have to reckon with the scandalous nature of his work. Jesus hopes that John will not be tripped up by the obvious differences between their ministries. Jesus answer says in effect, “Let what I am doing speak for itself,” – which is still a good answer to questions about Jesus. No serious enquirer reads a gospel without gaining new reapect for Jesus.

The passage which follows is very interesting. Firstly because it sounds like Jesus. I can’t defend that judgement except to say that frequent reading of the gospels gives one an ear for this voice: dry, passionate, engaging ( what did you go out to see?), generous, scandalous (the least in the kingdom is greater than John!). That doesn’t mean that every bit of it is from Jesus, but he must have reflected on his great predecessor as the one preparing the way, not for himself, but for God bringing his goodness to his people. The gospel writers saw John as pointing to Jesus, but in fact both John and Jesus pointed to the Rule of God (The kingdom of heaven) in the world. Jesus imagines that the waifs and strays who accept God’s Rule as he offers it, are greater than the great prophet because they are part of the new era of God’s lavish generosity. He’s not putting John down; he’s lifting up the little people.

Jesus also gives a characteristically wry view of the reaction of the religious establishment to John and himself. They are like a bunch of recalcitrant kids who refuse to play either at weddings or funerals, dismissing the severe John as a nutter and the approachable Jesus as a boozie pal of the riff-raff. The remark about Wisdom – a female personification of good thinking- may be proverbial. Matthew gives it as “Wisdom will be proved right by her deeds,” whereas Luke says literally, “by all her children.” The translation above is unusual and may well be right. Other scholars suggest that it means God’s wisdom will be recognised as right by God’s true children. In any case, Jesus, who identifies his ministry with Wisdom, says that he is content if it is judged by its ultimate results. He does not ry to force his teachings on people; nor does he organise an evangelical campaign to convince the doubters. He does what he does, and lets people respond as they decide.