28 After saying this, Yeshua went on and began the ascent to Yerushalayim. 29 As he approached Beit-Pagei and Beit-Anyah, by the Mount of Olives, he sent two disciples, 30 instructing them, “Go into the village ahead; on entering it, you will find a colt tied up that has never been ridden. Untie it and bring it here. 31 If anyone asks why you are untying it, tell him, ‘The Lord needs it.’” 32 Those who were sent went off and found it just as he had told them. 33 As they were untying the colt, its owners said to them, “Why are you untying the colt?” 34 and they said, “Because the Lord needs it.” 35 They brought it to Yeshua; and, throwing their robes on the colt, they put Yeshua on it. 36 As he went along, people carpeted the road with their clothing; 37 and as he came near Yerushalayim, where the road descends from the Mount of Olives, the entire band of disciples began to sing and praise God at the top of their voices for all the powerful works they had seen:

38 “Blessed is the King who is coming in the name of The Lord
“Shalom in heaven!”
and
“Glory in the highest places!”
39 Some of the Phariseesin the crowd said to him, “Rabbi! Reprimand your disciples !” 40 But he answered them, “I tell you that if they keep quiet, the stones will shout!”

This passage begins the final section of Luke’s Gospel, the story of the death and resurrection of Jesus. The long section dealing with Jesus’ journey to Jerusalem has come to an end. Many commentators have entitled this section, “The final conflict” which is appropriate in two senses: firstly, in reference to Jesus’ conflict with the secular and religious authorities; secondly in reference to his conflict with transhuman powers of evil, the forces of the Adversary, whom he has tackled in his ministry of healing. The modern reader, who may find the notion of such powers embarrassing should give Luke’s story the benefit of trust as it is unfolded. Throughout this passage Luke is again using the Gospel of Mark as his main source.

The modern reader will also find it hard to appreciate the importance of Jerualem for Luke. It is of course the holy city of the Jewish people, the location of its temple, to which faithful Jews might make pilgrimage for Passover and other religious feasts. The fervour of present day Muslims at Hajj would be a good parallel to the mood of Jewish pilgrims to the temple. Increasingly however, in the times of Jewish subjection to foreign powers,  some  faithful Jews believed that God himself had ceased to dwell there, and would only return when the heathens were removed. The return of The Lord to his Temple was for some worshippers an keen expectation. Meanwhile the ruling religious groups tried to maintain an understanding with the Romans which would allow them to maintain their authority as long as they kept their flocks peaceful and reasonably obedient to the Empire. Roman provincial governors like Pilate tried to rule with a light hand and with the cooperation of local elites, because it made fewer demands on imperial resources, but were prepared to act with extreme prejudice against any person or group that disturbed the peace. And there was a jihadist group, called Zealots, who were ready to use violence to that end. Jerusalem was the place where all these competing concerns encountered each other.

The password motif in the story comes from Mark and his sources. It is used by Matthew and Luke. In context it looks very like a messianic password, “The Lord” being the Messiah, the bringer of God’s kingdom. This is a clear signal to the reader that Jesus entry to Jeruslaem is to be interpreted as a claim to be Messiah, although a Messiah of a particular sort. The donkey is important because it picks up the prophecy of Zechariah 9:9 which envisages the victorious King arriving “humble and riding on a donkey” that is, not on a war horse. This King will “remove the war chariots from Jerusalem and make peace amongst the Gentiles.” On this basis we can say that Jesus’ use of the donkey is a) a claim to be Messiah; but b) a Messiah who comes to drive out war rather than to make it.

The details given by Mark which are repeated by Luke make the event almost a parody of a Roman Triumph where palm branches and clothing take the place of scented petals and Galileans substitute for the nobility of the state. The shouting however is openly messianic, these people are welcoming a King. Indeed, in case the reader doesn’t work this out, Luke changes the traditional phrase “the one who comes” to “the King who comes.” He balances this alteration with the addition of the cry, “Peace in heaven!” which reminds the reader that God’s Rule is peaceful. 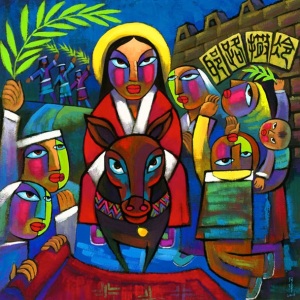 Luke is depicting the return of God to his Temple in the person of his peaceful Messiah Jesus. That’s why its stones will shout if the disciples are silent. The reader is going to find that the climax of this return is even more paradoxical than its beginning, as Luke takes his story towards the Messiah’s death.