41 When Yeshua had come closer and could see the city, he wept over it, 42 saying, “If you only knew today what is needed for peace! But for now it is hidden from your sight. 43 For the days are coming upon you when your enemies will set up a barricade around you, encircle you, hem you in on every side, 44 and dash you to the ground, you and your children within your walls, leaving not one stone standing on another — and all because you did not recognize your opportunity when God offered it!” 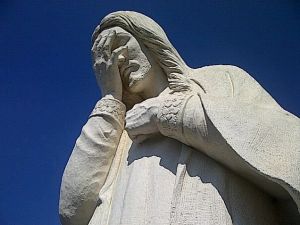 Luke’s portrait of Jesus is consistent in depicting him as a prophet to his people and of his people. Although Luke has an international perspective on the gospel, which is perhaps more explicit in his sequel to the gospel, The Acts of the Apostles, he is very clear about Jesus’ Jewishness and the origins of the universal gospel in the faith of Israel.

In this brief episode he depicts Jesus mourning the blindness of his people’s rulers, prophesying the destruction of Jerusalem and its temple, as a consequence of their refusal of his peaceful kingdom rather than one achieved by violence.  Luke would have known the history of the Jewish rebellion of 70 CE, which was defeated with the dispersal of The Jewish leadership and the destruction of its temple. We may suspect that some details in Jesus prophecy are written out of that knowledge, but we should not therefore simply disregard Jesus’ prophetic vision, or his anguish, as fictional.

Luke interprets Jesus’  prophetic mission as offering a peaceful way to assert God’s Rule in Judaea/ Galilee, even in the midst of Roman power, claiming in effect that Jesus’ Way could have prevented the disaster of 70CE. The fact that the Romans were quite happy to kill Jesus on the grounds that he was a messianic agitator, raises questions about the accuracy of this claim.

Luke was writing in the time of the growth of the Assemblies of Jesus as communities no longer accepted by the Jewish leadership, in an Empire that was suspicious of all religious cults. He was concerned to depict the faith of Jesus as different in its peacefulness from the faith of the Jewish jihadis. This illustrates a genuine problem for the Gospel writers who were depicting a man given the title Messiah (anointed King) and executed by the Romans as a messianic rebel ( “The King of the Jews”) while distinguishing him clearly from messianic  pretenders before and after him. The fact that they still use the title Messiah ( Christ) of Jesus is evidence of how deeply it is  embedded in the believers’ memory of him, and how likely it is to be a record of fact: that Jesus saw himself as the peaceful ruler of his people. 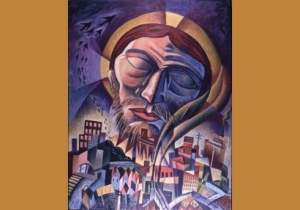 Luke’s picture of the messianic King weeping over the city that is rejecting him and his way of peace, is a powerful corrective to all who imagine that oppression justifies the use of violence. That is not the way of Jesus.