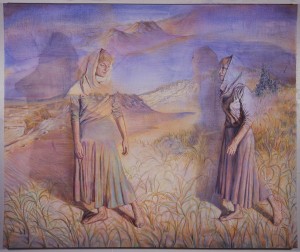 Now it came to pass in the days when the judges ruled, that there was a famine in the land. And a certain man of Bethlehemjudah went to sojourn in the country of Moab, he, and his wife, and his two sons.

3 And Elimelech Naomi’s husband died; and she was left, and her two sons.

5 And Mahlon and Chilion died also both of them; and the woman was left of her two sons and her husband.

7 Wherefore she went forth out of the place where she was, and her two daughters in law with her; and they went on the way to return unto the land of Judah.

8 And Naomi said unto her two daughters in law, Go, return each to her mother’s house: the Lord deal kindly with you, as ye have dealt with the dead, and with me.

9 The Lord grant you that ye may find rest, each of you in the house of her husband. Then she kissed them; and they lifted up their voice, and wept.

10 And they said unto her, Surely we will return with thee unto thy people.

11 And Naomi said, Turn again, my daughters: why will ye go with me? are there yet any more sons in my womb, that they may be your husbands?

13 Would ye tarry for them till they were grown? would ye stay for them from having husbands? nay, my daughters; for it grieveth me much for your sakes that the hand of the Lord is gone out against me.

14 And they lifted up their voice, and wept again: and Orpah kissed her mother in law; but Ruth clave unto her.

16 And Ruth said, Intreat me not to leave thee, or to return from following after thee: for whither thou goest, I will go; and where thou lodgest, I will lodge: thy people shall be my people, and thy God my God:

17 Where thou diest, will I die, and there will I be buried: the Lord do so to me, and more also, if ought but death part thee and me.

18 When she saw that she was stedfastly minded to go with her, then she left speaking unto her.

19 So they two went until they came to Bethlehem. And it came to pass, when they were come to Bethlehem, that all the city was moved about them, and they said, Is this Naomi?

20 And she said unto them, Call me not Naomi, call me Mara: for the Almighty hath dealt very bitterly with me.

21 I went out full and the Lord hath brought me home again empty: why then call ye me Naomi, seeing the Lord hath testified against me, and the Almighty hath afflicted me?

22 So Naomi returned, and Ruth the Moabitess, her daughter in law, with her, which returned out of the country of Moab: and they came to Bethlehem in the beginning of barley harvest.

There’s a good deal of uncertainty about the date of the writing and therefore about its purpose. I read it as a fiction in the style of an ancient chronicle, composed probably around the beginning of the 4th century BCE, with the purpose of questioning the established policy of Nehemiah and Ezra who forbade Jewish men to marry foreign women. It is a masterclass in storytelling, subtle, passionate, humane and with a radical message. I’ve chosen to read it in the King James Version because its  author was imitating an older style of writing, which the KJV supplies to the contemporary reader.  I am also giving myself the pleasure of re-reading it in Hebrew.

The restoration of the small kingdom of Judah after the Persian King Cyrus had allowed the exiled  Jews in Babylon to return to their own land, was a slow and difficult process. Jews who had not been exiled resented the returnees, and disputed their version of Torah. The split with the Samaritan Jews took place in the years following the return, while the Torah advocated by Nehemiah and Ezra attempted to impose a religious/ racial purity on the people. Foreigners and unorthodox Jews became objects of suspicion.

The story of Ruth is inserted into this culture of racial and religious purification, and into its literature as typified by the biblical books of Exra and Nehemiah. It offers a quiet but devastating counter- narrative to the stories of a more exclusive Judaism.

It is about human beings behaving well. That makes it unusual.

The story is set in a realistic world where famine happens and people are forced from their own place, which is ironically called Bethlehem, meaning in Hebrew “house of bread” which in this case has no bread at all. The family deaths in the land of Moab make the misfortune into a bitter tragedy for Naami (whose name means “pleasant”) and her daughters-in-law. This establishes another crisis in the life of Naomi which demands decision and she judges that her own survival can be best secured by her return to Judah. The pattern of this movement, from the homeland to another country in time of famine is the same as that of Israel into Egypt in the time of Joseph, and the return to Judah therefore sets up in the Jewish reader’s mind the model of the Exodus. These parallels are not explicit but remind the reader who wants to get rid of foreigners that the Jews were once refugees in the land of Egypt and had found succour, as Naomi has, in foreign lands in time of famine. The language of the narrator is a mixture of naive storytelling along with a sophisticated charm of expression, which draws the reader into the world of the story. The little detail that “the Lord has visited his people in giving them bread”, for example, reminds the reader of Bethlehem, the house of bread, which is going to be the scene of second half of this story.

At the point where Naomi’s decision provokes a decision on the part of her daughters-in-law, the story breaks into direct speech, much in the way of the stories of the patriarchs in Genesis, in which crucial moments are marked by speech. This narrator has learned from the ancient storytellers and is a master of devising passionate speech that expresses human feelings and decisions while taking the story forward. Naomi calls on her daughters-in-law to go back to their own, while recognising their faithfulness to her sons and herself. They respond by pledging their faithfulness to her and her decision to go back to her people. Naomi responds passionately, calling them her daughters, telling them they can hope for nothing from her: as young widows they need new husbands and as a woman she can not supply them. There is here a profound understanding of the role of women in their societies. Naomi is being faithful to these women by advising them to look to their own security rather than hers. Then comes the astonishing speech by Ruth, who until this point in the story is just one of the daughters-in-law. Now through the words given to her she becomes the main character. Her words are also passionate, expressing her loving faithfulness to Naomi. It is not a response which could be expected of her by any social or religious morality. No, she ventures upon a new and distinctive loyalty as she speaks, bringing a new possibility into being by her own decision. The beauty and power of the Hebrew phrases are different from the English which nevertheless rises to match them in memorability. She binds herself phrase by phrase – whither thou goest, I will go…….thou lodgest I will lodge….thy people my people…thy God, my God – to Naomi, so that even in the midst of the ordinary trials of the world, both women, and the reader, now know that something beyond the ordinary is possible.

The ordinary trials are not thereby lessened. Indeed when the two women get back to Bethlehem, Naoami for the first time voices her sorrow, denying her own name which means  pleasant and adopting a new name Marah that means bitter. And she lays her suffering at the door of Yahweh the God of her people, who has dealt with her very bitterly. Her experience of human loyalty gives her strength to question the loyalty of her God.

Still, the story teller wants to move us onwards and gives us a hint that the future will be positive by mentioning that in the House of Bread, it is the time of harvest, when perhaps the fruits of human faithfulness will also be revealed.

I am reading this brief masterpiece in the wake of the Brexit vote, in a society which has been encouraged to accept a racist narrative that makes migrants the cause of all our societal ills. Although my own nation, Scotland, decisively rejected this narrative, its dehumanising effects are evident here as well as in the rest of the U.K. The societal conditions therefore of contemporary UK and ancient Judah are similar enough for me to insist that the narrative of Ruth is as relevant now as it was then, because in the figure of Ruth, who binds herself to “us”, it undermines all the  labels that say she is “them”, and in whose vivid humanity it destroys all attempts to turn her into a thing.