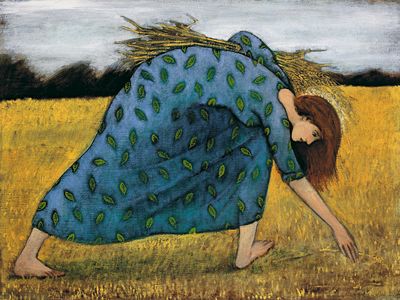 Now Na′omi had a kinsman of her husband’s, a man of wealth, of the family of Elim′elech, whose name was Bo′az. 2 And Ruth the Moabitess said to Na′omi, “Let me go to the field, and glean among the ears of grain after him in whose sight I shall find favor.” And she said to her, “Go, my daughter.” 3 So she set forth and went and gleaned in the field after the reapers; and she happened to come to the part of the field belonging to Bo′az, who was of the family of Elim′elech. 4 And behold, Bo′az came from Bethlehem; and he said to the reapers, “The Lord be with you!” And they answered, “The Lord bless you.” 5 Then Bo′az said to his servant who was in charge of the reapers, “Whose maiden is this?” 6 And the servant who was in charge of the reapers answered, “It is the Moabite maiden, who came back with Na′omi from the country of Moab. 7 She said, ‘Pray, let me glean and gather among the sheaves after the reapers.’ So she came, and she has continued from early morning until now, without resting even for a moment.”

8 Then Bo′az said to Ruth, “Now, listen, my daughter, do not go to glean in another field or leave this one, but keep close to my maidens. 9 Let your eyes be upon the field which they are reaping, and go after them. Have I not charged the young men not to molest you? And when you are thirsty, go to the vessels and drink what the young men have drawn.” 10 Then she fell on her face, bowing to the ground, and said to him, “Why have I found favor in your eyes, that you should take notice of me, when I am a foreigner?” 11 But Bo′az answered her, “All that you have done for your mother-in-law since the death of your husband has been fully told me, and how you left your father and mother and your native land and came to a people that you did not know before. 12 The Lord recompense you for what you have done, and a full reward be given you by the Lord, the God of Israel, under whose wings you have come to take refuge!” 13 Then she said, “You are most gracious to me, my lord, for you have comforted me and spoken kindly to your maidservant, though I am not one of your maidservants.”

14 And at mealtime Bo′az said to her, “Come here, and eat some bread, and dip your morsel in the wine.” So she sat beside the reapers, and he passed to her parched grain; and she ate until she was satisfied, and she had some left over. 15 When she rose to glean, Bo′az instructed his young men, saying, “Let her glean even among the sheaves, and do not shame her. 16 And also pull out some from the bundles for her, and leave it for her to glean, and do not rebuke her.”

17 So she gleaned in the field until evening; then she beat out what she had gleaned, and it was about an ephah of barley.

I began reading this marvellous book in bible blog, but have also commented on its meaning in my other blog xtremejesus.co in which I noted the the way in which Ruth’s loyalty creates a new human identity for herself and Naomi her mother-in-law.

I am glad that I have also been reading it in Hebrew, because in this section the language used by the author draws on the “pastoral” tradition of Jewish narrative, such as we find in the stories of Abraham, Isaac and Jacob. This tradition tells of events in a measured and delicate way, with respect for traditional customs, while nevertheless indicating the strong human desires of the characters.

In this passage, the reader is reminded that harvest time in the fields is a season of hard labour in the sun, when a slave woman might be a little at risk from the desires of young men who lived and worked together for a landowner. This same sense of harvest is present more than 2000 years later in Robert Burns’ song Corn Rigs, in which a young man asks a girl to “see him through the barley.” Within the text here there  are little nudges to remind the reader of human sexuality, as for example in the Hebrew word  translated maiden, which means a slavegirl, but also a concubine. The author wants the reader to realise gradually that Ruth and Boaz have more than a polite interest in each other. We are told that Boaz is a kinsman of Naomi’s dead husband, and that he is wealthy, but we are are shown by his treatment of Ruth that he is a generous, careful, decent man. The dialogue between them is full of delicate indications of mutual respect. Ruth is properly respectful as befits someone picking up the leavings of the cut grain. Boaz is careful of her dignity as stranger in need and as a foreign woman who has shown great loyalty to a widowed Jewish woman.

Boaz reveals that he knows her story. The human loyalty by which Ruth has created a new identity for herself and Naomi is recognised by Boaz and taken up into the story of Istael and its God. For the harvest season with all its lively abundance is the gift of God who is remembered in Boaz’ greeting to his workers and their reply.Generous  loyalty is also the bond between Israel and her God, and between each Israelite and her neighbour, but it emerges in this story in response to the actions of a foreign woman. A powerful feminine image of God as mother bird is used to describe the power which has brought Ruth to Bethlehem, the house of bread, which lives up to its name as Ruth is encouraged to glean enough grain for her needs.

Boaz may already have an interest in Ruth which goes beyond duty, but he is depicted as doing his duty with justice and discretion. He wants to let her gather her own grain, allowing her the dignity of labour, instructing his men to leave her generous amounts, without telling her or demanding her gratitude. This kindly courtesy is part of an identity based on common humanity and the generosity of God, both of which lead to an abundance that is simply shown in one sentence:

“so she sat beside the reapers, and he passed to her some parched grain; and she ate until she was satisfied, and had some left over.”

Human beings share God’s goodness seated together, and there is more than enough. This reminds the Christian reader of the baskets of leftovers after the feeding of the five thousand. The day ends with an estimate of Ruth’s harvest as being an ephah, which as far as I can work out, is a sizeable amount, more than sufficient for herself and Naomi.

Step by step the story show how people through human loyalty can create a common identity that is worthy of God. If, as I think, the story was written in Judah at the time when Ezra was teaching a Torah that told men to divorce their foreign wives,  and that put forward a narrow definition of God’s people, the author is patiently contradicting the sectarian assumptions of that kind of Torah by insisting that human goodness is found beyond as well as within Israel/ Judah. For him or her, the fact of human goodness is what underpins trust in the goodness of God.