not a sparrow falls to the ground without the Father

So I can ask, has God banished his people? Certainly not! For I myself am an Israelite, a descendant of Abraham, of the tribe of Benjamin. God has not banished the people whom he knew in advance as his own! Don’t you know what the Scripture says of Elijah, how he appeals to God against Israel?

“Lord, they have killed your prophets and torn down your altars; and I alone am left, and they seek my life.”

But what does God’s voice say to him?

“I have kept for myself seven thousand men who have not bowed the knee to Baal.”

In the same way then, there is at the present time a remnant of Israel, chosen by kindness. But if it is by kindness then it is no longer by human achievement, since otherwise kindness would not be kindness at all.

What follows? Israel did not get what it was after. Well, God’s chosen ones got it, but the rest were given hearts of stone. As the Scripture says,

“God put them in a dwalm, eyes without sight and ears without hearing, down to this very day.”

And David says, “May their rich table become for them a snare, a trap, a trip-stone and a punishment! May their eyes be benighted so that they cannot see, and may they always be subject to error! 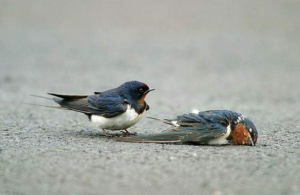 Here Paul spells out his notion that Jews who follow Jesus Messiah are the prophesied “righteous remnant” of Israel – a term originally applied to those who survived exile in Babylon and returned to Jerusalem. He emphasises that God had always known these faithful people. The translation of the Greek proegno, “foreknew” is tricky because the verb to know in Hebrew also means sexual knowledge, and the prophets play with this connotation of God’s knowledge.  I have sometimes translated “loved in advance” at other times as here, “known in advance as his own.”  Human beings are subject to time but God’s love is not.

The corollary of this is that God’s knowledge of Israel’s wrongdoing is also without time. His love permits and anticipates wrongdoing, so that it can be said that “God put them in a dwalm.” This biblical language describes stubborn wrongdoing in which God seems almost complicit. Does Paul mean that this human action is predestined? Yes, he does, but his view of God’s eternal plan and of God as God, is very different from the heavy –handed doctrine of predestination developed by Augustine, Luther and Calvin. He means that God’s love encompasses and includes the wrongness as well as the rightness of human beings.

This  capacity of God to include without remainder is crucial to Paul’s faith in his power to rescue creation from sin and death.