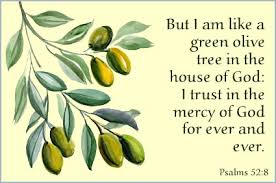 So I ask you, did they err so that they might have a fall? Certainly not! On the contrary, through their falling away God’s rescue has come to the Gentiles, so as to make Israel envious. But I’m speaking with you Gentiles. In so far as I am the “Emissary to the Gentiles” I glorify my ministry to see if I can move my natural kin to envy, and so rescue some of them. After all if their rejection means the world’s reconciliation, what will their acceptance mean, if not life from the dead?

If the first portion of the dough for the sacred loaves is holy, the lump is as well.  If the root is holy, so are the branches. But if some of the branches were cut out, while you as a wild olive were grafted in amongst the rest and share the common life of the rich root of the olive tree, do not lord it over the branches. If you do, remember it’s not you that sustain the root, but the root sustains you. Then you may say, “Branches were cut off so that I could be grafted in.” True, they were cut off because of their lack of trust while you stand firm in trust. So don’t be conceited, but cautious, for if God did not spare the natural branches, he won’t spare you either.

Look at the gentleness and the rigour of God! Rigour towards those who fell away; but towards you, divine gentleness, as long as you hold to his gentleness; if not, you too will be cut off. And even those, if they do not continue in their lack of trust, will be grafted back in once more. If you were cut from what is by nature a wild olive tree, and grafted contrary to nature into a cultivated olive tree, how much more will these natural branches be grafted back into their own olive tree.

Just as in Paul’s opinion human sinfulness led to God’s overwhelming rescue, so Israel’s rejection of Jesus Messiah has led to the blessings of Israel’s God being shared with the Gentiles through Paul and the other emissaries to the Gentiles. God’s desire to perfect his/her creation is eternal but the novement of God’s kindness is historical, in Israel, Jesus and the Emissaries of the joyful news.

The intimacy of the Gentiles with God should, Paul hopes, make Israel jealous and provoke their return to the shared life of God’s people. This shared life is imaged as an olive tree, which is a messianic symbol, (Zechariah 4) as is the image of the root, which is the root of Jesse, the father of King David, ancestor of the Messiah (Isaiah 11). Paul imagines the Gentiles as ingrafted branches of the messianic tree, drawing life from the olive tree which exists in the past, the present and the future, and which is identical with both God’s people and Messiah Jesus.

He doesn’t gloss over the Jewish rejection of Jesus; it is a falling away, and can be described as being cut off from God’s people. But he continually sees it as a moment in the divine plan to bless all nations, as a means and not an end. Israel will eventually see the blessed life of the messianic people and desire it for herself. Even Paul’s proud ministry as Emissary to the Gentiles is a provocation to Israel to desire the same joyful news.

God’s capacity to include both the godless Gentiles and the godly but rebellious Israel is a measure of his goodness. Only those who refuse inclusion, who do not want to be part of the new humanity of God’s children, find themselves excluded by their own decision. And even then, those who live justly by their own tradition, are in Paul’s view acceptable to God. Still we may ask what Paul would have thought of a pious Roman or a Zoroastrian, or a Buddhist monk. My guess is that he would have rejected the trappings of their religions and accepted them as people whom God wanted to bless with the joyful news of Jesus. If they were unable to believe his message I do not think he would have seen them as condemned by God.  The rigour of God is that he/she will not protect you from the consequences of your decisions, because he hopes you will learn from them, and turn towards the shared life of his people.