The true Light which enlightens all people

was coming into the world.

He was in the world,

and the world was made through him,

and the world did not know him.

He came to his own

and his own people did not accept him.

But to all those who accepted him,

who put their trust in his name,

he gave the right to become children of God

-born not of blood, nor of the will of the flesh, nor of a man’s will,

And the Creative Wisdom became flesh

and made his dwelling among us;

and we saw his splendour

the splendour as of the only-begotten of the Father,

full of beauty and truth.

(John bore witness about him and cried out,

“This is the one of whom I said,

‘The One who comes after me ranks before me

because he existed before me.'”

Out of his fullness we have all received

For the Law was given through Moses;

God has never been seen by anyone;

God the only -begotten, who is in the father’s bosom,

He has announced him.

This is a passage of extraordinary beauty, compression and theological significance. In reading it we should remind ourselves that it is written about a Jewish man who lived and taught in Palestine a couple of generations before the author, but is described by the author as The Creative Wisdom and even more astonishingly, God the Only- Begotten. It is easy to understand how these astonishing descriptions of a human being should offend monotheistic believers such as Jews and Muslims.The Qur’an’s bitter accusation, “They make partners for Allah,” is an understandable response. Yet this passage precedes the doctrine of the Trinity and must not be confused with it.

The Creative Wisdom is called the Light because it is God’s truth which illuminates reality for human beings. It is always “coming into the world” through prophets and teachers but it “was in the world” in the Creative Wisdom Made Flesh, namely in Jesus Messiah.The refusal of the Light by human beings and especially by his own people is as true of the prophetic truth as it is of Jesus himself. “His Own” is an ambiguous expression meaning more obviously the Jewish nation, but also meaning the human beings who have been created through the Light.

The scandal of the rejection of The Light is matched by the miracle which results from its acceptance: those who put their trust in his name, Jesus Messiah, the only Son of God, are also given birth by God as his sons and daughters. The contradiction between the “only Son” and the many who became “Children” is not noted nor explained, but simply stated. The only Son is unique, but there are other siblings. This is much more awkward than the traditional doctrine of the Trinity. Is there a distinction between the Only- Begotten, and the many who are “born of God”? It seems there is, but it is not easy to define.

This passage therefore is not only an account of the Creative Wisdom becoming flesh but a narrative of the before and after of that event; in the relationship of God’s truth to the Jewish people in the past, and now to those, both Jews and Gentiles, who accepted God’s truth in Jesus Messiah, and have become God’s children.

The event itself is the centre of this passage. The Creative Wisdom of God is made flesh. It is vital to keep the word flesh and not to translate, as some modern versions, “was made a human being.” Flesh is the stuff that all human beings and all animals are made of. It is recognised by the prophet Isaiah is intrinsically mortal and weak: “All flesh is grass and its beauty is as the flower of the field; the grass withers, the flower fades when the breath of the Lord blows upon it” Greater than the scandals of the rejection and acceptance of the light is the scandal of Creative Wisdom becoming this poor stuff. Jesus Messiah is not seen as a God-like human being who reaches upwards towards the status of God, but tather as the Creative Wisdom itself in flesh and blood. This is not in the first instance an ascending movement of humanity, but a downward movement of God. 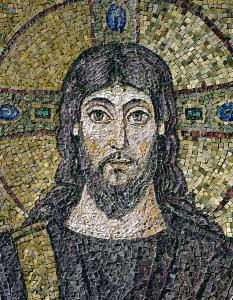 The Wisdom Made Flesh is described literally as “pitching his tent among us”. This is not only a traditional bedouin image, but also refers to the “tent of the presence” which contained the Ark of the Covenant, the holiest emblem of Jewish faith. The Creative Wisdom comes to “sojourn” with human beings as God did in the Exodus and the gift of the Torah. The author here makes the claim that the great event of the Wisdom being made flesh is foundational of a new faith which includes the faith of Israel but goes beyond it. The universal concepts employed however, humanity, flesh, all people, signal that the Gospel is about a new birth for all life, not just for Israel. This new birth brings “splendour” the word associated with the presence of God in Jewish thought. Now this splendour is manifested in the Wisdom Made Flesh. Those who put their trust in his name, Jesus Messiah, that is, in his character, will themselves share that splendour as God’s children.

The quotation from John the witness deliberately associates Jesus with the eternal life of God, “because he existed before me.” The “fullness” from which “we” have received is therefore to be understood as the inexaustible fullness of God. The normal translation of what we have received is “grace” but it can equally well mean gracefuleness or beauty, which I have chosen because I think it points to the splendour shared by the Wisdom Made Flesh. The pairing of beauty and truth in the character of Jesus is profound because it matches the quality of loveliness which is often humanly attained by ornament and dress, with the Greek word for truth, which means un-concealment, reality not art.

The Jewish Torah, which came through Moses is not scorned by the author, but he contrasts its wisdom with the true and lasting beauty of those who have put their trust in the Wisdom Made Flesh, whose splendour they share. The reality in which believers live is the presence of the God whom nobody has seen but whom Jesus has announced in his life and death and rising. I grew up with the phrase “only begotten son” at this point in the text, but the best manuscripts available now have, “God only begotten” as a designation of Jesus. It is a bold movement of thought which the rest of the Gospel will justify to the reader.