And this is the evidence of John when the Judaeans sent priests and levites from Jerusalem to ask him, “Who are you?”

And they asked him,”Who are you then? Are you Elijah?”

“Are you the the Final Prophet?”

So they said to him, “Who are you? We must give an answer to those who sent us. What have you to say about youself?”

He said, “I am “the voice of one crying in the desert,’Make a straight road for the Lord!‘ as the prophet Isaiah said.”

There were also some sent by the Pharisees who questioned him and said, “So why are you baptizing if you are neither the Messiah nor Elijah nor the Prophet?”

John answered them, “I baptize with water; but in the midst of you stands one whom you do not know, the one who is coming after me, the thong of whose sandal I am not worthy to untie.”

(These events took place in Bethany in Transjordan, where John was baptizing.)

Unfortunately, the main evidence we have for John the Baptizer is in the Christian Gospels. Only Josephus, a Jewish historian 37-100 CE gives a independent evidence about John, which bears out the bible accounts of his activity but differs in his relationship to Jesus and in the story of his murder by Herod. Clearly John was a major figure in Jewish religious history, whose influence, even after Jesus’ crucifixion was noted by Luke the author of The Acts. 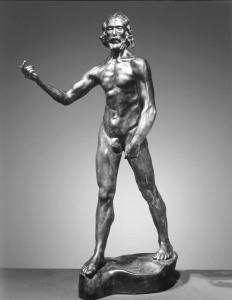 The Christian Gospels all endeavour to portray John as a forerunner of Jesus, and as his baptizer. It seems unlikely that the Christian tradition would have invented this awkward detail, which may well be factual. It is likely that the Gospels have converted genuine words of John about the “mighty one who is coming” to make them apply to Jesus rather than to God himself, whose active rule on earth (the kingdom of God) was probably the focus of John’s message.

John’s Gospel never explicitly refers to John’s baptism of Jesus, quotes him as clearly denying any messianic status, and refuses him even the honour of being Elijah to Jesus’ Messiah.The tradition which is expressed in John’s gospel is dogmatic in the sense that it holds beliefs which have been questioned and which therefore must be stated clearly. Its narrative about John has this character.

The Judaeans and the Pharisees in this passage are the enemies also of Jesus, and their suspicious questioning of John is a mirror of their subsequent treatment of Jesus. I have translated the Greek “iudaioi” not as Jews, which is the traditional translation, but as Judaeans, because it is unclear what the author meant by this term and because the traditional translation contributed over the centuries to Christian persecution of Jews. The narrative of the questioning of the Baptist creates an opportunity for the author to put the reader right about him: he disavows any messianic role.

He claims a role, however, as “the voice crying in the desert” of Isaiah chapter 40 whose responsibility is to “prepare the way of the Lord and to straighten his road” – the authot misquotes the text. The point of Isaiah’s words is the promise of God leading his exiled people in a new exodus across the desert from slavery in Babylon. The Gospel author wants his readers to see John’s words applying to Jesus who will lead a new exodus of believers not only from the doomed Jewish state, but also from the present world ruled by evil powers.

There is very little about The Messiah in the Bible. Only Daniel 9-25 provides an unambiguous prophecy which was probably meant to identify someone who opposed the Greek rule of Israel. The rest of the evidence is in various non-biblical Jewish writings and in the New testament itself. The truth is that we cannot know exactly what the word meant to Jesus’ contemporaries, other than the belief that the leader would be a human being chosen by God to rescue Israel. It is very clear that the author of this gospel set great store by the faith that Jesus was the true Messiah, but far from clear what he meant by it.

(The expectation of Elijah’s return is biblical only in the sense that his ministry on earth ends with his being taken up to God, which gave room for popular imagination. The Final Prophet was thought to be the one mentioned in Deuteronomy 18:18.These ideas all belong to speculation about the “end times” and suggest to the reader that Jesus also belongs to these times.)

If John’s role is as the voice announcing a new exodus, it is not clear what his baptism means, nor does this gospel give any explanation. Baptism was used as a sign that a person from “outside” now belonged to Israel. The religious authorities are shown suspecting John of “gathering a new Israel.” The author leaves John’s answer hanging in the air. He baptises with water, but the hidden One who is present amongst them, is much greater. The second half of the answer, “he will baptise with the Holy Spirit” which is found in the other gospels, is left unspoken, but is given an extended presentation in chapter 3. Jesus, the Wisdom Made Flesh, is among them because he has come to his own, but “his own did not accept him”. The sad but saving irony of the rejection of Messiah Jesus by the religious leaders of his people, is present in this gospel from the start.