I am translating John’s Gospel from Greek and commenting on it.

Now when evening came, his disciples went down to the sea, boarded a boat and set off across the sea to Capernaum. It was now dark and still Jesus had not come to them. A great wind was blowing and the sea was roused. Then when they had rowed three or four miles, they saw Jesus walking on the sea, approaching the boat, and they were afraid. But he said to them, “I am here; don’t be afraid.”

Then they were happy to take him into the boat; and in an instant the boat was at the land to which they had set out.

The story of Jesus “walking on the water or sea” appears also in Matthew and Mark, and is to be distinguished from the similar story of the stilling of a storm. The key to the story is in Jesus’ words, in Greek “Ego eimi” which can be translated “It’s me” or “I am here.” The gospel writers are aware that this is the divine name revealed to Moses, “God and tell Pharaoh that I am has sent you to him.” In this story Jesus appears as the God who walks on the waters of chaos, the creator God.

John’s version of the story is beautifully plain and profound. The disciples set off over the sea without Jesus. The journey represents any experience of believers that exposes them to the chance that rules the world. The darkness is symbol drawn from the biblical creation story, as is the wind, which is both threatening and creative, both storm- wind and creative Spirit. The distance travelled emphasises that the disciples are irrevocably committed to this testing environment.

But it is not so much the chaos that makes them afraid as the approach of the One who walks the waves: here is the God whom no one can see and live. Then Jesus identifies himself as God and yet as himself adding the typical divine command, “Don’t be afraid.”

The story tells us that the realm of chaos and darkness, in which human beings, even people of faith, are threatened with extinction, is also the realm of God’s creativity. It is not a realm from which God is absent. This much was already known to the writers of the Jewish bible. But here, God’s creative presence in chaos is identified: in Jesus, God is present to chaos and darkness. The Gospel will ultimately reveal that it is in Jesus’ crucifixion that God declares his order in the midst of chaos. 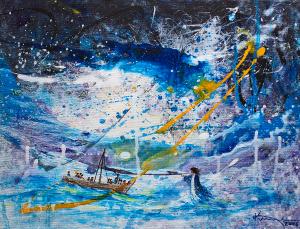 This is how Jesus, God’s son, steps into the human boat and is gladly received. Once he is in the boat our voyage is over; suddenly we are on land.

The story offers us a parable of human existence. We set out towards the far shore without any comforting divine presence. We experience the chaotic nature of existence from which there is no escape. Then we find that this is also the environment of God who walks on the water on the wings of the wind. The Gospel writer here makes a right interpretation of the Genesis story: God is not only the God of the light and the dry land; but also the God of the darkness which balances the daylight and of the great deep which surrounds the land. This may seem a harsh teaching, but it is in fact the good news that when all that is solid has dropped away, the lights have gone out, and we seem to be wallowing in the great deep, we are still with the God who out of chaos brings new things… and new people! But we could not live with this terrifying God, if it were not the case, that when he/she comes close, we see he has the face of Jesus, our brother. He is the one through whose suffering and murder God shares and rules the chaos.

Dietrich Bonhoeffer said that the God who abandons us is the God who meets us in our struggle.

The Gospel writer places this story immediately after the story of the miracle of the loaves and fishes where Jesus appears to the crowd as a messianic miracle man and has to withdraw from their desire to make him king. The writer is not teaching that Jesus is a-political, but that his politics are “not of this world”; they are of the creator who does not protect his faithful from the powers of the world, but asks them to share his victorious suffering. This kind of politics is described in another “John” book, The Revelation.

The passage also suggests a profound practice of pastoral care that enables men and women to live with the God who walks the waves of chaos, who is there IN the trouble and not sitting enthroned above it.

I have proposed an interpretation of this passage which focuses on its meaning for all humanity, but of course it also applies to the “ship of faith” and its adventure into deep waters and great winds. It shares the exposure to chaos and darkness experienced by all human beings – it is not given any privilege, except that of knowing the name of the One who meets us all in the heart of darkness.