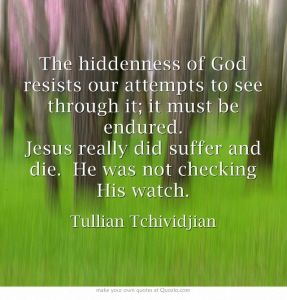 Then Jesus said to the Judeans who had put their trust in him, “If you abide in my teaching, you really are my disciples; and you will know the truth and the truth will set you free.”

They answered him, “We are the seed  of Abraham and have never been enslaved to anyone. How can you say, ‘you will become free’?”

Jesus answered them, “Amen, amen, I tell you that everyone who keeps on sinning is a slave of sin. And the slave does not dwell in the house forever; the son dwells there forever. So if the son sets you free, you will be free indeed. I know that you are the seed of Abraham but you are trying to kill me, because my teaching has no place in you. I speak of what I have seen with my father; you do what you have heard with your father.”

They answered him, “Our father is Abraham.”

Jesus said to them, “If you are Abraham’s children, do what Abraham did! But in fact you are trying to kill me, a man who has told you the truth, which I heard from God! Abraham did not do this kind of thing. You are doing the deeds of your father.”

They said to him, “We are not the offspring of illicit sex; we have one father, God.”

Jesus said to them, “If God were your father, you would love me, for issued from God and have come from him. I did not come of my own accord, but he sent me. Why don’t you understand what I’m saying? It’s because your ears are shut to my teaching! You are of your father the devil and you want to do what pleases your father. He was a murderer from the beginning and does not stand in the truth for there is no truth in him. When he tells a lie he speaks out of his own nature, for he is a liar and the father of lies. But because I tell the truth you don’t trust me. Which one of you can convict me of sin? But if I’m telling the truth, why do you not trust me? The person who is of God hears the words of God; you do not hear them, because you are not of God.”

The Judeans answered him, “Surely we’re right in saying that you are a Samaritan and have a demon!”

Jesus answered, “I do not have a demon, but I honour my father, while you dishonour me. Yet I do not pursue my own honour; but there is one who pursues it and makes judgement. Amen, amen, I tell you, if anyone holds to my teaching, she will never see death.”

The Judeans said to him, “Now we can be certain you have a demon! Abraham and the prophets died but you say that if someone holds to your teaching she will never taste death. Are you greater than our father Abraham who died, and the prophets who died? Who do you make yourself out to be?”

Jesus answered, “If I honour myself, my honour is nothing. It is my father who honours me, the one of whom you say, ‘He is our God.’ And you have not come to know him, but I know him. If I were to say that I do not know him, I would be a liar like you. I do know him and I hold to his teaching. Your father Abraham was full of joy that he would see my day; and he saw it, and was glad.”

Then the Judeans said to him, “You are not yet fifty years old and you have seen Abraham!”

Jesus said to them, “Amen, amen, I tell you, before Abraham was born, I AM.”

At that they picked up stones to throw at him, but Jesus hid himself and went out of the temple.

This passage is full of oppositions: slave/free; truth/ lies; honour/ dishonour; murderer/ life-giver; death/ life, all of which are used to reveal the mystery of the one who is the human presence of God.

The gospel insists that Jesus is the son, who is subject to God and sent into the world by God, but can also say “I Am.” The paradox is that Jesus’ perfect obedience and faithful love of God makes him the perfect revelation of the father. His intimacy with the father allows him to reveal the father’s will to others who show that they are “of God” by listening to his teaching. Does this expression “of God” (Greek ek tou theou) point to some kind of predestination, that there are two kinds of human beings, those who are of God and those who are of the devil? John Calvin thought so. He said that even a cursory glance at human behaviour should convince you of this truth. The Gospel does not speculate in that way: it merely insists that human decisions express fundamental belonging. The goodness of human beings is rooted in God; their evil is rooted in the devil.

There are times when this binary opposition in the Gospel story risks consigning ALL “Judeans” to the devil. This sort of blanket condemnation is sectarian and dangerous; it goes along with Matthew’s condemnation of all scribes and Pharisees as hypocrites, as evidence against calling even the gospels the perfect word of God.

The gospel writer has a special view of “truth” (Greek: aletheia): for him it means the unveiling, the un-concealment of God in Jesus Christ. Seeing this truth is not easy. How can a human being be the presence of God? Surely that idea is blasphemous and risks dissolving the fundamental distinction between humanity and God. The Greek word “doxa” which I have translated “honour” is important here, because it is used in the Greek version of the Hebrew Bible for God’s “glory”, the Shekinah or shining out of God’s holy being which may rest on Moses or the Temple. For Jesus to seek this doxa, this honour, would be blasphemous, but for God to give it to his son Jesus would be an act of love and revelation. For this author, truth is the reality of God’s love, unconcealed in Jesus.

There is  real bite in this apparently benign teaching: if this is the truth, then all teachings about God as power are wrong, indeed they must be rejected as lies and those who promote those teachings must be treated a liars. Those who threaten punishment in God’s name are seen not only as liars but also as killers inspired by the same devil who inspired Cain. The “sectarian” language of this author may be defended as resolute defence of the truth of God’s love against the crucifiers of Jesus and the expulsion of his followers from the synagogue.

In this gospel’s presentation of Jesus’ murder, we can see how the author opposed the truth of God’s love not only to religious power but also to the power of Rome. It is in that sense the most political of the gospels, in its clear distinction between the kingship which is “of this world” and the kingship which is “of God.” In times as now of religious and  political tumult, the hard edge of this gospel’s distinctions may be relevant, if painful.