As he passed by, Jesus saw a man blind from birth. And his disciples asked him, “Rabbi, who sinned, this man or his parents, that he was born blind?”

Jesus answered, “Neither this man nor his parents sinned; it happened so that God’s work could be openly seen in him. We must do the work of the one who sent me as long as it is day; night is coming when no one can work. While I am in the world, I am the world’s light.”

Saying this, he spat on the ground and made clay of the spittle and anointed the blind man’s eyes with the clay. Then he told him, “Go and wash in the Pool of Siloam” (which means “sent”)

So he went and washed and returned seeing.

Then the neighbours and people who had seen him before as a beggar said, “Isn’t this the man who sat and begged?”

So they said to him, “Then how come your eyes were opened?”

He answered, “The man called Jesus made clay and anointed my eyes and told me, “Go to Siloam and wash. So I went and washed and could see.”

They brought the man who had formerly been blind to the Pharisees. It was a Sabbath on the day when Jesus made the clay and opened his eyes. So they also asked him how he was able to see. And he told them, “He put clay on my eyes and I washed and I can see.”

At this, some of the Pharisees said,  “He is not from God, this man, for he doesn’t keep the Sabbath,” But others said, “How can a sinful man do such signs?”

And there was dissention amongst them.

For that reason, they said again to the blind man, “What have you to say about him, since he opened your eyes?”

The Judeans did not believe that he  had been blind and had recovered his sight until they summoned the parents of the man and asked them, “Is this your son that you say was born blind? How come he can see now?”

His parents answered them, “We know this is our son and that he was born blind. But we don’t know how he is able to see, and we don’t know who opened his eyes; ask him, he’s an adult, he can speak for himself.”

So they summoned the man who had been blind a second time and said to him, “Show honour to God! We know that this man of yours is a sinner.”

He answered, “I don’t know if he’s a sinner; but I know one thing: I was blind but now I see.”

They said to him, “What did he do to you? How did he open your eyes?”

He answered them, “I’ve already told you and you did not listen. Why do you want to hear it again? Maybe you want to become his disciples as well!”

Then they heaped abuse on him, “You are a disciple of this fellow but we are disciples of Moses. We know that God has spoken to Moses, but we don’t know where he comes from.”

The man answered, “Well now, this is a wonder, that you don’t know where he comes from, yet he opened my eyes. We know that God doesn’t listen to sinners but if someone is God- fearing and does his will, He listens to him. In this age of the world it has never been heard that someone opened the eyes of a man born blind. If this man were not from God, he could do nothing.”

They answered him, “You were born in sin, totally, and you dare to teach us!” And they threw him out.

Jesus heard that they had thrown him out, so he found him and said, “Do you trust in the Humane Ruler?”

Jesus said to him, “You have seen him; it’s the man who is talking with you!”

He said, Lord, I do trust,” and he knelt before him.

Jesus said, “I came into this world to be a judgement, that those deprived of sight may see and those who see may become blind.”

Some of the Pharisees who were near him heard this and asked, ” We’re not blind too, are we?”

Jesus said to them, “If you were blind, you would have no sin. But since you say, we can see, your sin remains.”

Sometimes John so overloads his narrative with meaning that it bends or cracks under the pressure, but here he gets it exactly right: his story beautifully explores the meaning of Jesus as the light of the world. It also continues the discussion of “truth/ aletheia” from chapter 8: the fact that God un-conceals himself in the man Jesus, is of course more like a means of concealment, especially for those who pride themselves on their ability to see. Those who in humility admit their blindness are more likely to see  Jesus and the one who sent him.

Some scholars have seen predestination in Jesus’ explanation that the man has been born blind “so that” God’s work may be seen in him. I see it simply as a denial of divine punishment and an assurance of God’s creative goodness working in the world. Every human ill is there “so that” it may be healed in the power of God’s goodness. Jesus’ commitment to acting on God’s behalf lights up the world, but he prophesies a time of darkness when evil will take him out of the world. (This darkness will actually turn  out to be the greatest light of all!)

Jesus uses earth because he wants to emphasise the earthly means available for healing earthly people. Yes, God’s goodness is crucial but it works through the earthly Jesus and his earthly clay. He “sends” the man to a pool whose name means “sent” which reminds the reader that Jesus the healer is also sent, by God.

The people have never really “seen” the man born blind, so when he is blind no more, they are not sure who he is. They have previously seen only his disability. Jesus has seen him and enabled him to see. The healed man is shown developing his own robust witness to Jesus. At first he confines himself to saying what Jesus has done for him. When pressed he identifies him as a prophet. His parents are wary of the Pharisees but he stands firm in his allegiance, with the memorably utterance, “I do know one thing: I was blind but now I see.” Pushed by the Pharisees to denigrate Jesus he becomes eloquently sarcastic towards the religious leaders, “Well now, this is a wonder…” He expresses the openness of the truth the Pharisees refuse to see: a good thing has been done which must be credited to the God of goodness, working through Jesus.

There is a real blindness depicted here, similar to the blindness narrated by Mark when the Pharisees, in the face of Jesus’ healings, say that he is inspired by the Evil One, an blasphemy which Mark described as an unforgiveable sin. John is more measured, simply noting the terrible fact of this wilful blindness that will not recognise an inconvenient goodness. They only see a breach of the Sabbath by someone working. Jesus emphasises that he is doing the work of the God of the Sabbath, but the Pharisees know they are right. God forgive me, it was when I was surest I was right that I did the most harm.

The faithful witness and Jesus come together in partnership, Jesus inviting the man’s trust and the man honouring Jesus as Humane Ruler by kneeling to the goodness that flows through him. The man shows that he has spiritual as well as physical sight.

Earlier in the Gospel Jesus has said he never judges but here it is said he has come into the world “for judgement” “eis krima” in Greek. I have translated, “to be a judgement” for he does not stand in judgement but allows people who see the light to come to him; and those who refuse to come to him to remain in darkness. 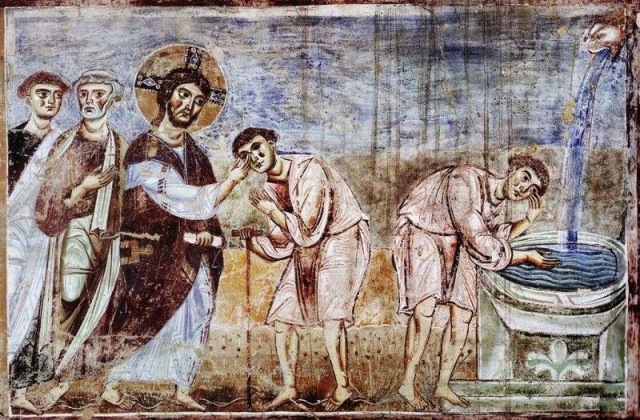 On a day when Bashar Assad of Syria and his Russian allies have refused to see the terrible evil of a chemical weapons attack and have lied childishly about it, John’s unsparing analysis of moral and spiritual blindness rings true.