Then the disciples went back to their homes. But Mary stood by the tomb, outside it, weeping. And as she wept she stooped into the tomb and saw two messengers in white, one at the head and one at the feet where the body of Jesus had lain. They say to her, “Woman, why are you weeping?”

She says to them, “Because they have taken away my Lord and I don’t know where they have put him.”

When she had said this, she turned around and saw Jesus standing but she did not know that it was Jesus.

Jesus says to her, “Woman, why are you weeping? Who are you looking for?” Imagining that he was the gardener, she says to him, “Sir, if you have carried him away, tell me where you have put him, and I will take charge of him.”

Swinging round she says to him in Aramaic, “Rabbouni!” (which means, Teacher).

Jesus says to her, “Don’t embrace me now, for I have not yet gone up to the father, but go to my brothers and say to them, “I am going up to my father and your father, to my God and your God.

Mary from Magdala went and announced to the disciples, “I have seen the Lord!” and that he had said these things to her. 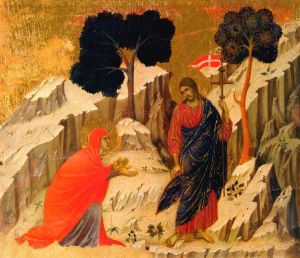 This is another masterpiece of narration. The weeping of Mary is a tender feature, emphasised by two questions. She is the beloved who has lost the bridegroom and is seeking him with tears (an image from the Song of Songs 3) The messengers in white are traditional symbols of revelation; here they stand marking precisely the absence of Jesus’ body. If my previous suggestion that some of the narrative derives from a resurrection ritual then these details might almost be a stage direction to those acting the part of messengers.

The reader should note that the present tense of male/ female banter is resumed here. Indeed given its use in Jesus encounters with the Samaritan woman and with Martha and Mary, we can see that the author has planned this dialogue as the culmination of that theme which depicts the longing of Israel and the world for the true Bridegroom, the Messiah, the Creative Wisdom made flesh.

Given the stories of the resurrection which this author had at his disposal, we can see the art with which he expresses the fulfilment of God’s unveiling in Jesus, rejected, killed, but now sought and recognised. The moment of divine revelation is accomplished by nothing more than the Son of God saying a woman’s name, Mary. That’s it, the divine/ human goodness we have loved and failed and lost, is present and speaks our name, telling us we are known and loved and worthy.

The Bridegroom is here! Mary, representing all who have longed for him in spite of their sins, is ready to “embrace” (my translation of Greek: hapto) him joyfully, but she is gently rebuked. The time of final fulfilment is still to come after Jesus has ascended to the father- pointing probably to his return as “humane ruler” of the world. But even now the disciples are part of the new family, brothers of Jesus and children of the one father.

Mary, a woman of Israel, a daughter of Zion, but not considered by her society to be a legal witness, is commanded by Jesus to be the first evangelist, and entrusted with the announcement, “I have seen the Lord!”